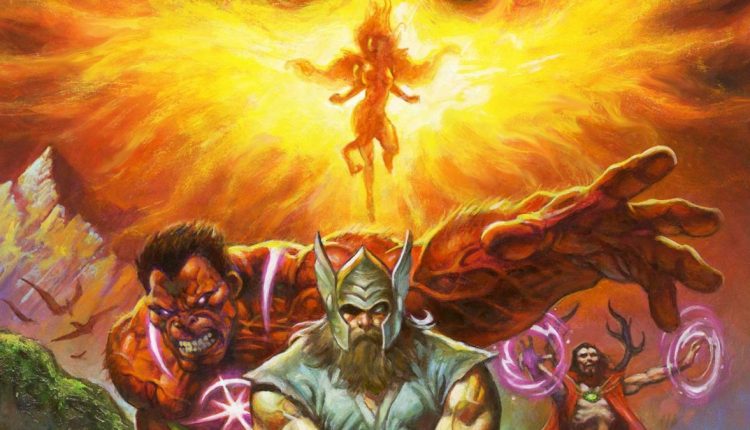 Avengers 1,000,000 BC to reveal the deepest secrets of the Marvel Universe this summer

updates: As previously teased (more on that below), Marvel Comics is gearing up to tell the “secret origin” of Thor in a new Avengers: 1,000,000 BC one-shot that explores the relationship between Odin and the Phoenix Force that supposedly led to Thor’s true parentage.

The oversized one-shot is written by Avengers core series writer Jason Aaron with art from Kev Walker, and along with revealing the truth of Thor’s birth and possible heritage as the son of Odin and the Phoenix, Marvel states that the one-shot will set up a story coming to the main Avengers title sometime later this year.

And if that’s not dramatic enough, Marvel also promises that the issue will reveal how the adventures of the 1,000,000 BC Avengers “shape the entire future of the Marvel Universe.”

“The Prehistoric Avengers have been an important key to my Avengers run since the very beginning. They are the earliest versions of some of the earth’s most powerful legacy characters,” Aaron states in the one-shot’s announcement.

“They’re the heroes who protect the Marvel Universe in its crib. And now we finally get to see them all in the spotlight in a huge way,” he concludes. “In a story that shows how these prehistoric heroes shaped Marvel history in the most profound ways and that will also have big ramifications for the Avengers going forward.”

Marvel has been building up a big twist in the parentage of the mighty Thor, with Jason Aaron’s Avengers run steadily establishing that while Odin is definitely Thor’s father, his mother may not be the Earth goddess Gaea, as he has long believed, but rather the cosmic Phoenix Force. And in July, the story behind Thor’s true parentage will be fully revealed in a new Avengers 1,000,000 BC title.

Few details of the new title have been revealed, but Marvel’s teaser for the new series promises to tell the full story of Thor’s “secret origin” as the son of the Phoenix Force, while also promising the reveal of more news about the 1,000,000 BC Avengers title to arrive on April 8.

Though Thor did not become the Phoenix host, the cosmic entity did share a moment with the God of Thunder in which she told him she is his mother – with Thor conflicted over the news.

Clues about the connection between Thor and the Phoenix have continued to surface in the title, with Thor and Echo (the current Phoenix host) recently combining their powers as Echo referred to Thor as the “son of the Thunderbird.”

Interestingly enough, the original Phoenix Host of the 1,000,000 BC Avengers, known as Firehair, is also one of the world’s earliest mutants, which means the connection between Thor and the Phoenix could even come into play in the upcoming AXE: Judgment Day event in which the Eternals go to war with mutantkind with the Avengers caught in the middle.

Stay tuned to Newsarama for more information as this story develops, and keep an eye out for Newsarama’s full July 2022 solicitations coming later this month.

All things considered, Tucson book festival was a triumph | Books