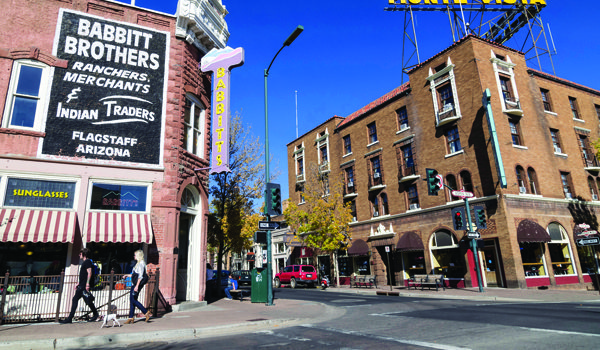 A historic $32,460,000 will be invested in transportation and pedestrian safety infrastructure in the City of Flagstaff from the bipartisan Infrastructure Investment and Jobs law led by Senator Kyrsten Sinema and shaped by Senator Mark Kelly.

The grant award, allocated by the US Department of Transportation, delivers pedestrian safety improvements, supports roadway expansions, and improves public transportation infrastructure, as well as enables critical enhancements to freight and passenger rail infrastructure along the Burlington Northern and Santa Fe (BNSF) Southern Transcontinental Corridor. The project, known as the Downtown Mile Project, is supported by the City of Flagstaff, BNSF, and many other local and regional partners, including Coconino County, Northern Arizona University, and Coconino Community College.

“When we wrote our bipartisan infrastructure law, we ensured Arizona priorities would be addressed so communities across our state received needing funding for critical projects. I’m proud to announce today’s transformative grant – which we helped secure – will allow the City of Flagstaff to make much-needed upgrades to increase railroad efficiency, improve roads, and protect pedestrians, while boosting economic opportunities,” said Sinema, co- author and lead negotiator of the Infrastructure Investment and Jobs law.

“I’m glad to see these crucial investments we secured in our Bipartisan Infrastructure Law coming to the City of Flagstaff. The Downtown Mile project will improve regional freight rail infrastructure, build a new regional transit center, and upgrade and improve Flagstaff roads and sidewalks. It will also allow the City to complete the Rio de Flag flood control project which has been a priority for many Arizonans and small businesses impacted by repeated flooding. We’ll keep working with Flagstaff leaders to ensure they have the support and resources they need,” said Senator Mark Kelly.

“We are deeply appreciative of Senator Sinema’s steadfast support in securing the $32.46 million INFRA grant for the Downtown Mile Project. This monumental project will relieve traffic congestion in the busiest section of downtown Flagstaff and will ensure traffic and pedestrian connectivity in and out of downtown that will ensure the safety of all citizens. We are very grateful for Senator Sinema’s support and advocacy in supporting this critical infrastructure project as she continues to be a leader in transportation,” Coconino County Chair Patrice Horstman stated.

“Senator Sinema continues to be a champion for Mountain Line. From sponsoring the bill to increase the set aside for high-performing transit agencies like ours to helping us secure a $15 million federal grant to construct the new Downtown Connection Center (DCC) to leading the effort to increase transit funding in the IIJA to today’s announcement of the $32.46 million INFRA grant for the Downtown Mile Project. It is yet another example of how hard she works for northern Arizona. More importantly, this $32.46 million INFRA grant will transform the transportation corridors in downtown Flagstaff and will allow for expedited completion of the DCC. We are incredibly thankful and grateful for Senator Sinema’s efforts to deliver transportation solutions and funds to NAIPTA and we applaud her for securing this transformative grant,” NAIPTA (Mountain Line) CEO and General Manager Heather Dalmolin stated.

“Senator Sinema has been a transformative leader in the transportation space. Because of her tremendous leadership in passing the IIJA, new programs were created and oversubscribed programs received an influx of new funding. She has always been a strong supporter of finding creative and innovative ways to help fund this critically important Downtown Mile Project that will help the City widen Milton Bridge and increase its height to state standards, complete the Rio de Flag Project, that she was instrumental in funding the final construction costs for the project, expedite construction of the Downtown Connection Project, which she strongly advocated to fund through a federal grant, and will complete the Lone Tree Corridor, an important arterial roadway that will help alleviate traffic congestion on the east side of downtown. In short, Senator Sinema has been a champion for the Flagstaff community and we are incredibly grateful for her hard work and support in helping us secure this $32.46 million INFRA grant,” Flagstaff Mayor Paul Deasy stated.

The grant for this project comes from the Nationally Significant Multimodal Freight and Highway Projects program, commonly known as the INFRA grant program, which was significantly updated and expanded through the Infrastructure Investment and Jobs law.

Sinema and Kelly’s Infrastructure Investment and Jobs law makes the strongest investment ever in American public transit with $39.2 billion to expand transit systems, increase accessibility, and fund the nation’s transit system repair backlog, estimated at more than 24,000 buses; 5,000 rail cars; 200 stations; and thousands of miles of track, signals, and power systems—and the biggest investment in passenger rail since the creation of Amtrak. Earlier this year, Sinema and Kelly announced that $176 million would be invested in Arizona public transportation this year alone.