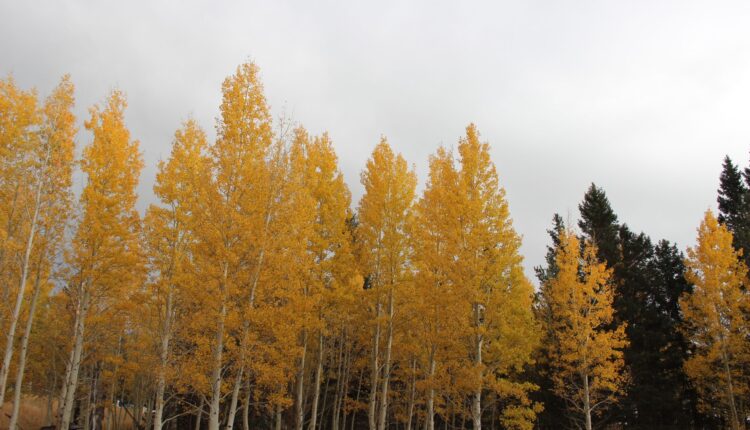 Some people might not expect the Grand Canyon State – widely known for its vast desert – to have brilliant fall foliage, but visitors far and wide travel to northern Arizona each year to see the brilliant yellow, red and orange leaves. The cool, crisp air in the forested meadows and aspen groves make leaf peeping a favorite seasonal activity in Flagstaff.

However, climate change and megadrought in the Southwest could be changing fall foliage as we know it, and researchers in Flagstaff are tracking tree health with a network of cameras to determine how the forests are being affected.

“What we’re generally going to see is a trend towards trees just not being as healthy and vigorous as they are currently, and that’s probably going to, in the long run, reduce the intensity of fall color displays,” said Andrew Richardson, a Regents professor at Northern Arizona University.

Fall foliage in Flagstaff normally peaks in early- to mid-October at Arizona Snowbowl, north of the city, and in November at lower elevations.

Temperature is a driving factor in the well-being of deciduous trees, which shed their leaves and become dormant in the winter. But with warming summers and long-term drought, leaves aren’t achieving the brilliancy they once did, and the timing of the color change is delayed.

Why do leaves change color?

Leaves typically begin to change color in late September through November, following the transition to fall.

When temperatures begin to drop and daylight gets shorter, deciduous trees – including oak, aspen and maple – cut off nutrients to their leaves. The chlorophyll in the leaves, which makes them green, begins to break down, and the yellows, reds, and oranges start to appear.

At the same time, leaf stems are experiencing their own changes. As the leaves weaken, the stems begin separating from the tree and eventually drop to the floor. Winds can expedite this process.

Changing leaves bring a huge economic boost to cities across the nation. An article from Appalachian State University estimates that leaf peepers contribute more than $30 billion annually to the economies of 24 Eastern states. Some popular fall destinations guide tourists to the best time for fall-leaf viewing by providing gauges that track the vibrancy of leaves, such as Flagstaff’s LEAFometer.

Fall foliage in Phoenix is ​​uncommon because leaves have adapted to hold on to their chlorophyll and essential sugars year-round, maintaining their green color to withstand intense heat.

“People don’t think of trees as a living thing, but they really need to be cared for and paid attention to, especially in our dry climate,” said LoriAnne Barnett Warren, an urban forestry specialist at the Arizona Department of Forestry and Fire Management. “It’s kind of part of your family, and you have to make sure you put it in the right place, away from your home or from power lines, to extend the lifespan of the tree.”

Tree stress can be measured by an instrument called a PhenoCam. At NAU, Richardson manages the PhenoCam Network, which includes more than 400 cameras used to monitor tree health across the nation, with more than 20 in Arizona.

Using high-resolution cameras and remote-sensing technology, researchers can see how trees are affected by climate change over time. The cameras capture a photo every half hour to feed a database of environmental conditions dating back several years.

Researchers then use these photos to compare current tree health to previous years. Richardson said the cameras, which cost about $950, are an affordable way to analyze fall foliage without the need for a human observer.

In Flagstaff, changes have already been observed in just a few years.

The cameras track the health of trees, but they also capture key information on the timing of other seasonal changes, such as a first snowfall.

Climate change is stressing out trees

According to Climate Central, fall temperatures across the United States have increased 2.7 degrees Fahrenheit since 1970, but in Phoenix and Tucson, the increase has been more than 5 degrees. Data for Flagstaff wasn’t included in the report.

As warming weather delays the start of fall, trees are receiving the signal to cut off nutrients later in the year, delaying the show of fall colors and harming forest health.

Phenologists – scientists who study how biology is being impacted by climate change – are finding that the leaves of stressed trees aren’t as vibrant during intense drought. Healthy trees will produce more sugar, which results in brighter colors.

“The more drought that there is during that year, the leaves are probably just going to turn brown instead of those vibrant colors that you see,” Barnett Warren said.

The latest US Drought Monitor data shows persistent drought in the West and Midwest, which has resulted in parched soil.

“Soil moisture plays a role in fall colors as well,” said Richardson at NAU. “If it’s a really dry summer, then the leaves might be dropped earlier in the year to reduce water loss.”

As leaves change color later and drop earlier, this also means climate change will reduce the time to enjoy fall foliage. Drought can even cause trees to skip the colorful phase altogether.

“(Those colors) will slowly be replaced by less vibrant colors over the next 100 years or so,” he said. “Leaves will just kind of turn brown, which isn’t as compelling and captivating.”