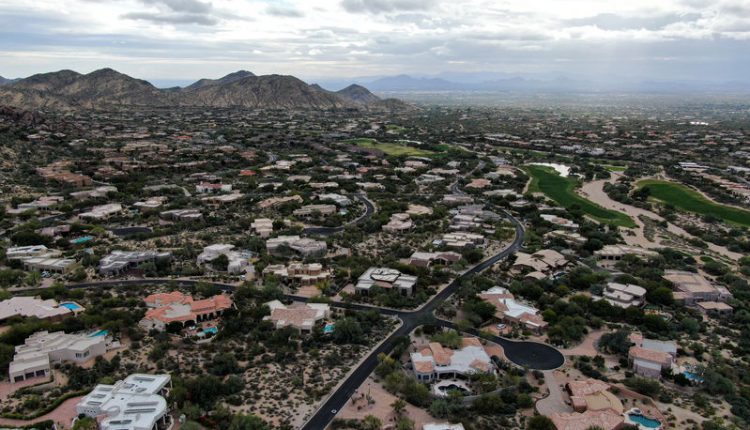 Flagstaff and Prescott typically have the lowest housing affordability in Arizona, but not this last quarter. In the second quarter of 2022, only 22.3% of homes sold in the Phoenix metro were affordable to those earning the median family income according to the National Association of Home Builders (NAHB)/Wells Fargo Housing Opportunity Index released August 11. Nationally, the share of homes affordable to families earning the US median income moved down to 42.8% compared to 56.9% in the first quarter, the lowest since the Great Recession. All Arizona metros had a drop in affordability and only three had a higher share of affordable homes than the nation. These were Sierra Vista-Douglas at 54.2%, Yuma at 43.3%, and Lake Havasu City-Kingman at 42.9%. Tucson at 40.6% was lower than the US for the first time in over a decade. Prescott Valley-Prescott had a share of 28.5% and Flagstaff was at 22.8%. Arizona did better than neighboring state California, which had the metros with the lowest affordability in the country, the worst being Los Angeles at 3.6%.

The inflation rate was 8.5% in July, but lower than the June figure of 9.1% according to the August 10 Consumer Price Index release from the Bureau of Labor Statistics. Core inflation, all items less food and energy, was up 5.9% over the last 12 months. Energy prices fell in July while prices for food and other items such as shelter and medical care were higher, leaving the CPI unchanged for the month on a seasonally adjusted basis. The index for all items less food and energy increased 0.3% over the month.

Use your cursor as a tooltip to switch series ON/OFF at the bottom of the chart. Run your cursor over the chart to view values.

Arizona remains near the bottom of all states when it comes to children’s wellbeing, ranking 44 overall in the 2022 Kids Count Data Book released August 8. The state ranked 40 overall in 2021. Massachusetts (1), New Hampshire (2), and Minnesota (3) were the three top-performing states in the nation for 2022 while New Mexico (50), Louisiana (49) and Mississippi (48) were the bottom-performing states. The index is based on indicators grouped into four categories, economic well-being, education, health, and family and community. Arizona’s rank for economic well-being dropped to 41 in 2022 from 35 in 2021. The state’s education rank remained the same at 47, and health was nearly the same at 29 (was 28 in 2021). Family and community was the only category with an improvement for this year, with Arizona ranking 44 compared to 46 last year.

US nonfarm payroll employment expanded in July by 528,000 on a seasonally adjusted basis. This was much more than the monthly average increase of 388,000 for the prior four months. Total employment is now at its pre-pandemic level though there are sectors that have not yet recovered, including government, which is still below pre-pandemic levels. The largest increases in employment for the month were in leisure and hospitality, which is still below its February 2020 level, and professional and business services, which is above its February 2020 level. The unemployment rate ticked down to 3.5% after sitting at 3.6% for the previous four months. Both the labor force participation rate (62.1%) and the employment-to-population ratio (60.0%) were little changed over the month and remained below what they had been in February 2020, according to the August 5 US Bureau of Labor Statistics release .

After spiking this March, the US trade deficit has decreased the last three months. The June deficit of goods and services was $79.6 billion, down from a revised May figure of $84.9 billion according to the Aug 4 joint US Census Bureau and US Bureau of Economic Analysis release. Exports rose $4.3 billion to $260.8 billion in June while imports decreased $1.0 billion for the month landing at $340.4 billion. Year-to-date, the deficit was 33.4% higher than the same period a year ago. 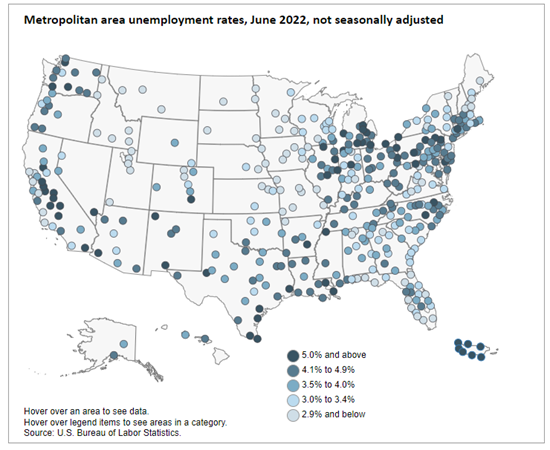 Phoenix house price gains have been eclipsed by metropolitan areas in Florida and Texas. The top gains in over the year house prices for May were in Tampa (36.1%), Miami (34.0%) and Dallas (30.8%). Phoenix price gains were 29.7% for May based on the S&P CoreLogic Case-Shiller Price Index released July 26. Nationally, house price gains dipped to 19.7% compared to 20.6% in April. The 20-city composite was also lower than the previous month, posting an annual gain of 20.5% in May compared to 21.2% in April. The metropolitan area with the lowest one-year change in house prices for the month was Minneapolis at 11.5%.

Advanced estimate of the second quarter 2022 real gross domestic product (GDP) indicated it decreased at an annual rate of 0.9%. A second estimate with more complete source data will be released on August 25. Real GDP decreased 1.6% in the first quarter 2022.

Arizona nonfarm employment increased 3.6% over June of last year according to the July 21 report from the Arizona Office of Economic Opportunity. Government was the only sector to post a decrease in employment compared to the same month last year, down 100 jobs. Leisure and hospitality along with trade, transportation, and utilities had the largest job gains over the year. Job growth in Arizona’s metropolitan areas for June included 5.8% in Yuma, 5.8% in Flagstaff, 4.0% in Phoenix, 3.8% in Lake Havasu City-Kingman, 3.4% in Prescott, 2.7% in Tucson, and 2.7% in Sierra Vista- Douglas. The state’s unemployment rate was 3.3% in June, up from 3.2% in May. Read more about Arizona’s June employment report in a recent article by George Hammond titled “Arizona’s Labor Market Still Tight in June.”

George W. Hammond, Ph.D., is the director and research professor at the Economic and Business Research Center (EBRC).