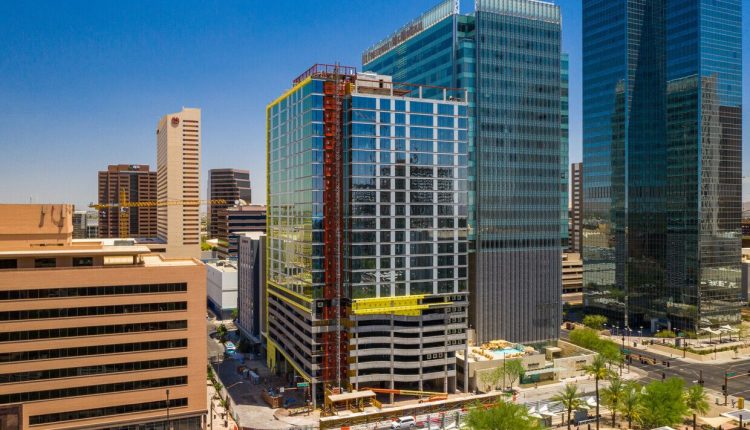 Downtown Phoenix is ​​filled with sparkling luxury apartments that are either just finished or under construction. But despite the influx of apartment complexes, Phoenix is ​​in the midst of an affordable housing crisis.

Metro Phoenix has an affordable housing deficit of 118,178 units for the 50th percentile of the area’s median income, according to the National Low Income Housing Coalition. In September, landlords filed to evict 6,685 renter households in Metro Phoenix, the highest monthly amount since 2008, according to Maricopa County Justice Courts.

While filings dipped in 2020 and 2021 due to eviction moratoriums, evictions for Maricopa County in fiscal year 2022 are up nearly 50% compared to fiscal year 2021, according to the Arizona Judicial Branch.

“I would say that the number of people that are experiencing homelessness has gone up and a lot of it has to do with the raise in housing and living costs,” said Taylor Hoffler, manager of guest and community relations at André House.

In 2020, the City of Phoenix’s first Housing Phoenix Plan identified a housing shortage and focused on increasing housing supply.

“This supply issue is a big part of why we’re seeing rent increases in the last few years,” said Joseph MacEwan, housing manager at the City of Phoenix.

“There are a couple of parcels in downtown Phoenix that the city owns that we would be looking to issue a request for proposals to redevelop for affordable housing,” MacEwan said. “That’s a unique opportunity that the city has to bring affordable housing into downtown. But, in general, that’s very difficult to see happen naturally.”

The land that the city could use for development typically has been owned by the city for a long time, said Xandon Keating, community development deputy director at the City of Phoenix.

“We’re not really in the practice of buying land to develop land, it’s generally land that we’ve purchased for some other purpose,” he said.

The city does not have any requirements to include affordable housing units if the project is privately developed, Keating said.

Preserving affordable housing can be just as important as building it.

“We do lose affordable housing. Property owners will sell their property, investors will come and change it to market rate,” MacEwan said.

The city has programs in place to try to preserve affordable housing units. One such program is the Housing Voucher Program, which is federally funded and available for those who are low-income. Those in the program only need to pay 30% of their income for rent and the program will cover the rest.

The difficulty is finding a landlord to accept the voucher.

“We have a number of folks who have a voucher but can’t find a place, property or an apartment who will accept it,” MacEwan said.

The city recently began offering a $2,000 bonus for landlords who accept the housing vouchers.

“That program has been very successful; we’ve had thousands of landlords take part in it. That’s a large part of how we’re preserving our existing affordable housing,” MacEwan said.