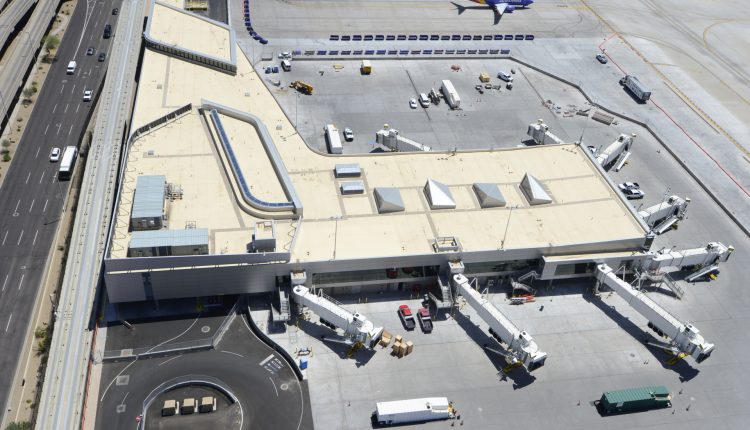 When you walk through Phoenix Sky Harbor International Airport, you are surrounded by the smell of delicious food, beautiful artwork, the constant sound of construction, and people in purple shirts. For such a large airport, there is always a need for changes at the airport.

To help the public keep up with the Sky Harbor changes, there are a multitude of programs offered to make navigation a little easier.

Since the pandemic in 2020, the traffic of people at the airport has been down. New changes have been constant in preparation for a rise in passengers.

“Our passenger traffic has been steadily increasing, and you know, recovering from the pandemic in 2020. And hopefully, at some point, we’ll reach those pre-pandemic numbers,” said Greg Roybal, a Public Information Officer at Sky Harbor.

Sky Harbor opened an eight-gate concourse in June, and it was approved by the city council in October 2016.

“The most recent thing that we have undergone is we just opened a new concourse in Terminal 4, which is a pretty major evolution. In this case, anybody who gates for Southwest Airlines is going to go through this new concourse,” Roybal said. “The new upgrade includes retail, it includes restaurants and all the infrastructure that goes into it. It’s a beautiful, beautiful site.”

While these changes are being made and the number of fliers keeps increasing, Sky Harbor has utilized its multiple volunteer programs to help with customer gratification. Misty Cisneros-Contreras, Customer Service Manager for the airport, explained the numerous services that are offered for customer convenience.

“Having Navigators is an extra layer of help for customers. In the aviation industry, airports share best practices, and this was one of those. Although we have paid staff that deliver exceptional customer service as well, these folks come weekly voluntarily,” said Cisneros-Contreras. “Their sole purpose for being there is to know the airport and help get people from A to Z.”

While the Navigator program has been around for 23 years, it is constantly being updated with new changes to make overall airport operations run smoothly and that customers are satisfied with their experience.

While there are a lot of changes being made, some frequent fliers said the new changes don’t benefit their experience of the airport.

“Every time I get off the plane coming into Phoenix, it is so crowded and there is no control of the crowd whatsoever,” said Caela Brannon, a university student who travels home often. “It feels like when it comes to improvements, they try to focus more on beautification and not functionality. While the new concourse is nice, I wish that there were more places to sit or more outlets to charge your phone.”

However, Roybal insists that the new plans they have for the airport will be all about functionality. “In the future, there are major infrastructure improvements regarding the new taxiway from the, on the west side of the runways connecting the north and the south runways. And this is a pretty big deal because it’s a major funding project from the federal infrastructure bill that was passed late last year,” said Roybal. “The other most ongoing thing right now is we are getting closer to the opening of the Phoenix SkyTrain stage two that will go to the rental car center and that’s expected to open before the end of the year.”

With all that is planned, having volunteers around helps create a more welcoming environment. “It is always nice to have a friendly face in a purple shirt who is willing to help me out and I feel welcomed whenever I see one around the airport,” Brannon said.

For more information about the new changes coming to the Phoenix Sky Harbor International Airport or about volunteer programs like The Navigators, visit https://www.skyharbor.com/

“We are here to bring support for all of our customers whether they are local or traveling for vacation,” said Cisneros-Contreras. “The Navigator program is just another layer of why we’re America’s friendliest airport because we keep building new programs that support our customers.”