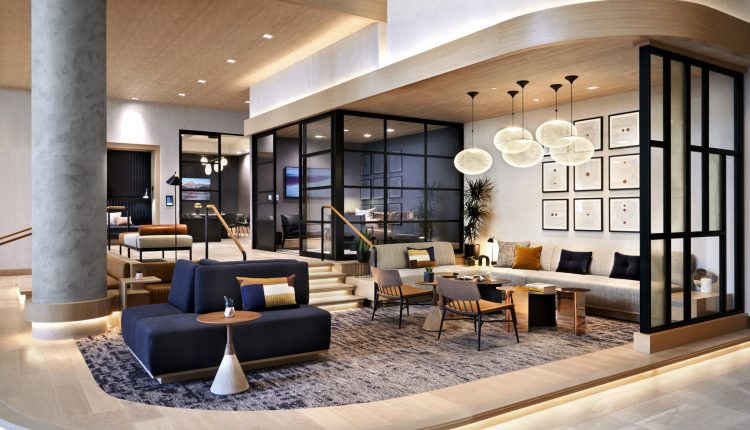 Sheraton Phoenix Downtown has managed to capture the charm and character indicative of resort-type atmospheres, while also cultivating a workcation environment (I’ll explain more later). Now, let me show you how and why you’ll want to place this downtown delight at the top of your staycation destination list.

Nestled in the heart of downtown, on 3rd Street (and East Van Buren), the Sheraton Phoenix Downtown recently completed a major renovation of its meeting and events spaces and debuted its contemporary, enchanting culinary hotspot, carcara (which I’ll brag more about soon). In addition to its expansive event spaces, lobby, fitness center and Sheraton Club, the property contains 1,003 lovely guest rooms distributed over 31 floors.

Unlike other larger corporate hotels, Sheraton Phoenix Downtown manages to permeate an intimate, charming and unique atmosphere throughout the property. Off the lobby, the first floor showcases a bar, surrounded by ample seating. And, depending on the day and time, you’ll usually find a musical artist sharing their craft with the crowd. Interspersed between the bar and restaurant (Carcara) are several meeting and conference rooms, as well as little alcoves with comfy chairs, tables and coworking spaces.

Each area, from the meeting rooms (encased in glass) to the pockets of individual/small group seating has its own character, making it feel relaxing, but also suited for getting down to work.

The same vibe carries over to the previously mentioned Sheraton Club. Like its lobby counterpart, it’s both cozy and conducive to a laptop work session. As an exclusive space for Marriott Platinum Members and guests (who purchase Sheraton Club access), the club is available day and night and is chock full of amenities.

On select days, the amazing Sheraton staff sneaks delicious late-afternoon appetizers into the club — charcuterie boards, crudite, fruit and desserts that would please even the most decadent of snackers (the same Sheraton Club elves appear in the morning to deliver goodies for breakfast ). Guests can also take advantage of a Starbucks coffee machine — you can make your own lattes — and other complimentary drinks. For all its plentiful and enjoyable offerings, there is one aspect of Sheraton Phoenix Downtown that truly shines: Carcara. The newly renovated restaurant is phenomenal in every way, shape and form. From the impeccable customer service — I’m talking about you Tony, Elizabeth and Kiana — to Chef Angy Dykstra’s Southwest-inspired menu, Carcara is the true gem of Sheraton Phoenix Downtown .

My friend Liz and I ordered the bass, scallops and short rib, which I heartily recommend. I also urge you to sample the shrimp ceviche and citrus creme brulee. And, if that isn’t enough, Carcara closes each meal with a special surprise (I can’t spoil all the goodies!). Whether it’s dinner with friends, your love or simply to enjoy one of the restaurant’s many signature cocktails on the open patio (overlooking downtown Phoenix), Carcara’s the place for you (and be sure to tell Tony that Erin sent you).

Want to book a stay at Sheraton Phoenix Downtown?

Tucson gets money from Infrastructure Plan to clean up blight