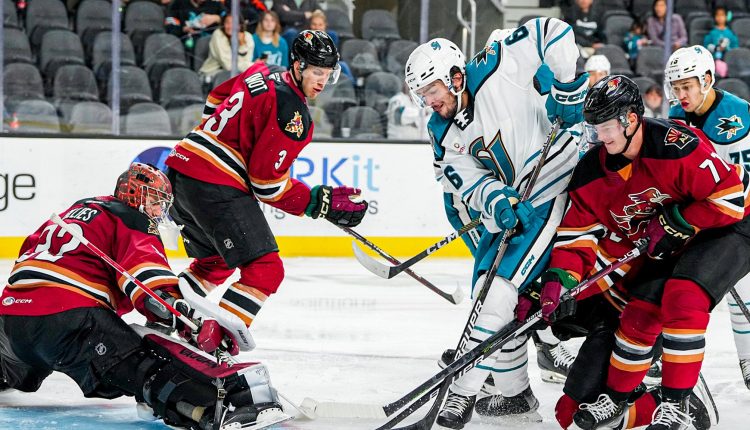 San Jose, CA – Trailing by a score of 2-0 after the first period, the San Jose Barracuda (4-2-0-1) fought back to pick up a point in a 4-3 shootout loss to the Tucson Roadrunners (5-1-0-0) on Saturday night at Tech CU Arena. Following a 4-0-0-0 start to the season, the Barracuda have dropped their last three at home.

The game started with a bang as eight of the ten starting skaters were assessed five-minute fighting majors and ten-minute game misconduct penalties before the puck hit the ice. Jasper Weatherby (SJ) and Travis Barron (TUC) were the initial players to drop the gloves as they were set to take the center ice face off. Adam Raska, Patrick McGrath, other Patrick Sieloff would also find a partner to square off with. Derrick Pouliot other Ronald Knot (TUC) were the only two skaters who avoided penalties. The two teams would combine for 170 penalty minutes in the game.

At exactly the ten-minute mark of the first period, the Roadrunners would pick up their first goal of the night with Nathan Smith (1) swipe in a Michael Carcone pass from below the goal line, beating Eetu Makiniemi. Just 1:26 later, Jean Sebastian Dea (3) jammed the puck past Mäkiniemi as the San Jose goaltender tried to seal it under his left pad, giving Tucson a 2-0 edge.

Outshooting the Roadrunners 19-7 in the middle frame, Daniel Gushchin (1) would swing momentum back in favor of the Barracuda early, picking up his first AHL goal on a snipe from just inside the blue line. Scott Reedy (2) would keep the ball rolling and tie the game at two with a shot from the top of the face-off circle. Later in the second, the Barracuda would find success on the power play, with William Eklund (2) putting home a rebound to give San Jose their first lead of the night. However, 39 seconds later, Carcone (3) would tie the game once again as Dea found him on a two-on-one.

After no goals were scored in the third or overtime, a shootout was needed.

Eklund, Andrew Agozzino other Thomas Bordeleau would be the three shooters for the Barracuda, but Adam Cracknell (TUC) would be the only goal scorer in the shootout as the Roadrunners earned the 4-3 win.

Yuma’s old prison is allegedly haunted. We stayed the night to see.

Tucson’s winter street fair returns for 53rd year; what you need to know