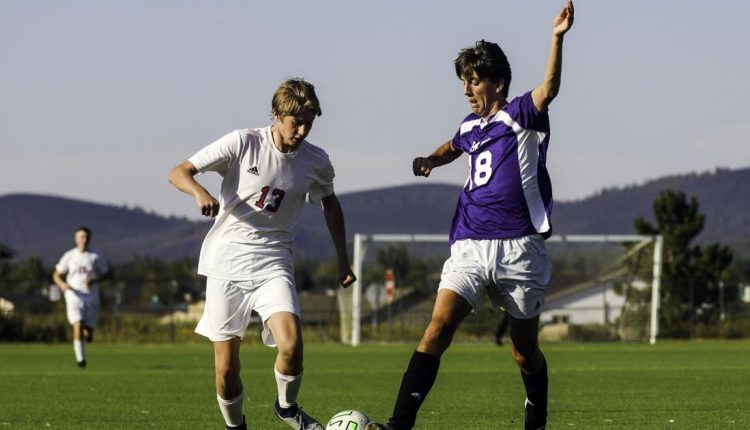 Until mere weeks ago, Evan Hofstetter had never scored a hat trick in a single half. Now, the base flagstaff striker has done so two times in as many matches.

Hofstetter scored four goals — three in the first half — in the Yeti’s 6-2 win over Grand Canyon on Wednesday at Cromer Elementary to push the team’s record to 2-0, with both wins coming in the North region.

Base Flagstaff has now scored 14 goals in two contests, racking up a pair of dominant victories.

“Today I liked the physicality of our team and I liked how we ran through every ball. There was little not to like. We did a good job pushing and not getting down the slight mishaps we had,” coach Brendan Personale said, following a game that Basis controlled throughout.

In the third minute of play, Hofstetter caught up to a long through pass from teammate Grant Cernohous and scored the first of his four goals. The connection between long-time teammates was productive all game. Cernohous finished the match with three assists — all to Hofstetter — and a goal of his own.

That type of play — Cernohous or other midfielders and forwards getting the ball to Hofstetter with space — could prove a weapon for the Yeti all season. Hofstetter has tremendous speed, as shown by his times as a state track and field runner, and can get past the opposing defenders on most teams.

“Today I wanted to just make as efficient, short runs as possible to make sure I don’t get tired. It was about getting behind the defense, go right to the offside line and then get one touch in and try to score,” Hofstetter said.

Base Flagstaff cruised to halftime up 4-1. Hofstetter and Macabe Wood added goals in the second half. Grand Canyon’s Roman Evans provided a bright spot, scoring his second of two goals in the final half. But there was little the Phantoms could do to keep the Yeti out of the attacking side.

Early scoring is a pleasant surprise for Basis. The Yeti lost a majority of last year’s starting group to graduation following a season in which they went 6-1 — their best record in school history — and narrowly missed the playoffs. Through two matches, the team looks better than most of the players and coaches expected.

“We knew we would be competitive, but we didn’t know how competitive we would be. So it’s looking like we’re building on what we did last year, and things are going in the right direction,” Personale said.

The Yeti (2-0, 2-0 North) will be tested in a road match against Camp Verde on Sept. 15. The Cowboys are the defending region champions and 2A Conference runners up from a season ago.

“Our next game is against Camp Verde, which was our worst, tough loss last year. And we don’t know anything about their team.” Hofstetter said, “But we didn’t know much about our team or this team coming into this game. I think a lot of us thought we might lose, so winning like this feels great and we’ll see what happens against them.”