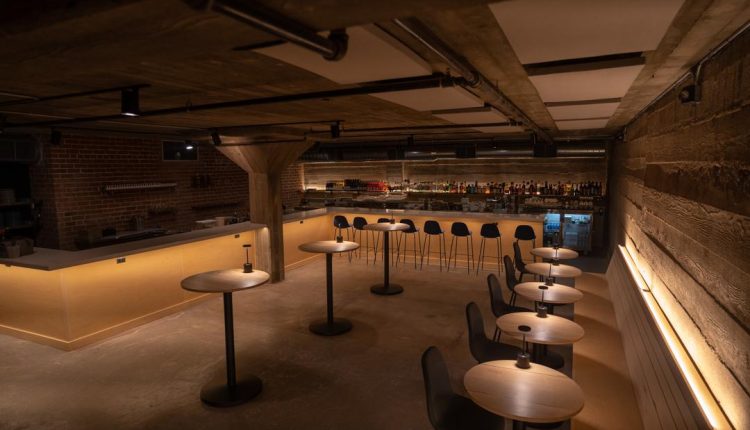 A new basement bar will be opening up in Downtown Tucson this Saturday.

Barbata is a downstairs addition to chef Tyler Fenton’s restaurant, BATA, which recently made Bon Appetit Magazine’s list of the nation’s top 50 new restaurants of 2022.

While BATA offers an upscale foodie experience inspired by European cuisine, Fenton said barbata will have a more fun and casual atmosphere inspired by that continent’s drinking culture.

“The menu will not have as much food as the restaurant’s menu,” he said. “But the whole idea is that it is approachable.”

The cuisine, which he calls “snack-entric,” was intentionally created to pair with drinks. There will be nine different small plates of food ranging from “a Spanish tortilla with aioli, to Cantabrian anchovies with extra virgin olive oil and lemon, to beef tartare with burned bread aioli, mustard greens, and toasted potato breadcrumbs.”

The bar offers a wide selection of spirits to compliment their appetizers including a curated selection of vermouths, sherries, and amari, as well as nine signature cocktails which Fenton described as elevated versions of classic mixed drinks. For example, they will be serving a “riff off” of an Old Fashioned with small batch bourbon, bitter, smoke and single-hive honey from the San Xavier Co-Op Farm. They will also offer items such as martinis with locally-made bitters and modernized versions of the negroni and cobblers.

If you prefer something less adventurous, there will be four wines by the bottle, nine wines served by the glass, four beer options and a cider available as well.

If you have room for dessert, you can pair your drink with Basque cheesecake and a cream puff with embered cream.

Unlike the restaurant upstairs, patrons won’t need to make reservations to enjoy barbata.

“People will be able to come in and out,” Fenton said. “It’s a place where you can come in and start your night or end your night with some dessert. We want it to be an entryway to BATA.”

Although the 1,000 square-foot space shares the industrial theme of BATA, Fenton worked with craftsmen from Midton Artisans to create a distinct atmosphere from the restaurant by using lighter, brighter woods that create a contrast from the concrete floors.

The room will be sparsely furnished with sleek stools and high tables. The venue has seating for 25 and standing room for 20.

A Tucson native, Fenton is also co-owner of the two locations of Reilly Craft Pizza and Drink. The Pennington Street restaurant also has a basement bar, the Tough Luck Club.

Fenton said his team has worked hard to accomplish their goal and he is hopeful for a positive opening evening.

The opening will be on Saturday beginning 4:30 pm in the basement of the 1930s warehouse at 35 E. Toole Ave.

“We won’t have a party or anything like that, but we’re looking forward to opening our doors and give people a warm welcome,” Fenton said.