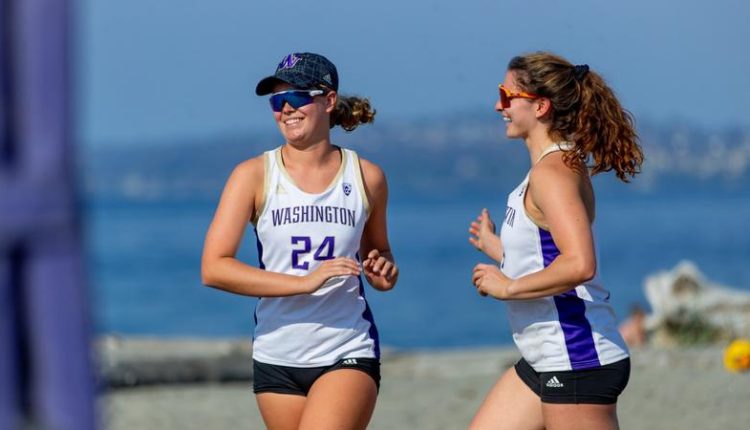 TUCSON, Ariz. — The Huskies found more success in the sand in their second weekend of fall pairs competition, highlighted by another all-Husky final in the Red bracket at the Arizona Fall Classic.

In the Red bracket, made up of 3’s, 4’s, and select 5’s, Washington duos met each other for the tourney win, just as the Huskies did in both brackets at Alki Beach last weekend. This time it was Paloma Bowman and Mary Sinclair pulling out the win over Scarlett Dahl and Kendall Mather in the final. Both teams had gone 1-1 in pool play, but then won twice in bracket play to set up the rematch. Bowman/Sinclair beat Arizona and Pepperdine pairs to make the final, while Dahl/Mather had a three set win over an Arizona duo, then a 2-0 win over a Grand Canyon pair.

In the top flight, Chloe Loreen and Natalie Robinson teamed together as they did all last spring. They went 2-0 in pool play, and won their bracket opener against an Arizona duo, but fell in the semis to Grand Canyon. Piper Monk-Heidrich and Teagan DeFalco were 0-2 in pool play, but fought back with consolation draw wins over teams from Arizona State and Pepperdine.

In the Blue flight, for 5/6/7 pairs, Hannah Yerex and Shannon Gormally went 1-1 in pool play, then dropped their first bracket match to Pepperdine. Maia Nichols and Jacqueline Strawn teamed up for the first time but did not pick up a win. Freshman Reagan Peterson partnered with a GCU player, earning two wins together. .