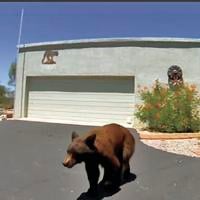 Tourist season has not yet begun but we’re starting to see unusual visitors.

A 120-pound bear was touring the area for a few days last week before officers from Arizona Game & Fish captured her.

Mark Hart, the public information officer for the department, said the female bear, estimated to be between 1 and 2 years old, did no damage, nor did she attack anyone. However, she did visit several neighborhoods, judging by the number of calls and bell camera videos the department received on its wildlife hotline.

“There’s video of her walking right up to someone’s back door, and looking in at children playing,” Hart said.

He added that the sliding glass door was open, but the screen door was closed. “The kids got excited, of course, but the bear made no move toward them. She didn’t try and get in the house.”

The bear was first spotted on Aug. 10 in a North Skyline Drive neighborhood, near the Tucson Arizona Temple, the Church of Jesus Christ of Latter-day Saints. The area is not surprising because there’s a corridor in the Catalina Mountains where bears travel. However, they do not usually visit the neighborhoods. This bear not only visited, she made her way around town.

“In the course of four days (she) was reported to us as being in Northwest Tucson or Oro Valley more than two dozen times,” Hart said.

“She basically went up to Oro Valley, went no farther than El Conquistador, then turned around and went south. She then started moving in a westerly direction and (on Aug. 13) turned up around Ina and La Canada.”

That’s where game and fish officers caught up to her, tranquilized and caged her. She spent that night in a wildlife officer’s backyard, and was released in a remote, unnamed mountain area, where she trotted off.

Altogether, officers figure she made about a 20-mile tour of the area, even at some point crossing Oracle Road, probably at night, Hart said.

This may not be the first time this bear has visited Tucson.

“There was a bear matching her description that turned up in late May that walked all the way down to Fort Lowell Park,” Hart said.

The reason for her visits is simple: food.

“She discovered garbage; we’re almost certain of it,” he added. This is a problem “because once a bear gets accustomed to human-sourced food, it becomes quite determined in trying to source it.”

Hart credits residents of Tucson and Oro Valley for quickly calling game and fish’s 24/7 wildlife hotline to report the bear. If you should spot wildlife such as a bear in your area, call the Arizona Game & Fish at 623-236-7201. In addition, Hart recommends not taking out the garbage until pick-up day, because garbage doesn’t attract just bears.

“Javelina are fully capable of knocking over a tall garbage can and foraging from that, and bears are particularly good at getting into garbage cans and dumpsters,” he said.

Pluto demoted to dwarf planet in 2006

‘An Arm and a Leg’: How to Negotiate for Lower Medical Bills