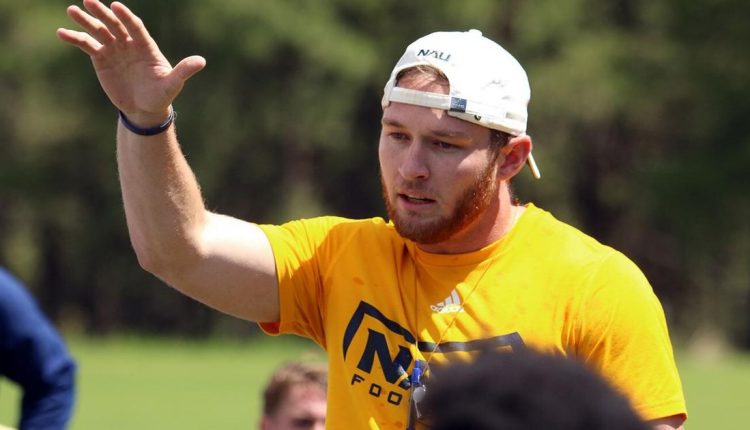 The Beemiller name goes way back in Northern Arizona University football history, where it is not only respected, but also decorated.

Harrison Beemiller continued his father’s legacy alongside his brother Heath when they joined the Lumberjacks in 2019. Their father, Vince, played football for Northern Arizona from 1984 to 1988, earning All-American honors as an offensive lineman.

Harrison earned his spot as a starting linebacker, highlighting his playing career with three All-Big Sky Conference honors. In Northern Arizona’s upset at Arizona last season, he totaled a career-high 12 tackles to go with 4.5 tackles for loss, tying for second-most in a single game since 1970.

“Flagstaff has been amazing ever since I was a kid. My dad went here in the ’80s, so I was always coming up to NAU games and always coming up to Flagstaff,” Harrison said. “It’s always been so beautiful and it’s the perfect place to be for college. That’s why I’ve stayed as long as I have.”

Harrison transferred to Northern Arizona from South Dakota Mines, where he played from 2017 to 2018 at defensive back. When he got to Flagstaff he was transitioned into linebacker, where his hard work and football IQ really stood out to the coaching staff.

“I think the glaring thing that gives Harrison a head start is his football knowledge. I didn’t totally know he had a passion for it until after his first year,” said Lumberjack’s defensive coordinator Jerry Partridge. “He had never played linebacker before, but he listened to his coaches and continued to learn and put in the work.”

Harrison is now a first-year defensive graduate assistant for the Lumberjacks, working primarily with the linebacker position.

He has quickly transferred his leadership skills and knowledge from playing to coaching, a seemingly easy transition while working with former teammates who know him well on and off the field.

“It’s a hard job when you get done playing with those guys and now you got to be their coach; sometimes it can be hard,” Partridge said. “Harrison is so well respected by the whole defense. They all love him and listen to him, and know he knows what he’s talking about. They know how hard he played.”

The respect comes naturally for players whom Beemiller impacts, but he knows he has to earn it regularly.

“Attention to detail and doing things right the first time, it’s important to do that as a player, and I’m learning that doing that as a coach is extremely important, too. When you do that, your players also follow the same direction as you and they do those little things right,” Harrison said.

Just a little less than a year after playing in his final game as a Lumberjack, Harrison is now focused on the coaching aspects of the game, but still shares the same goal — a Big Sky championship.

As the team enters fall camp ahead of the 2022 season, the Beemiller family still stands strong in their support for Lumberjacks football.

“I’m extremely thankful for my family’s support, especially with our background here and just how NAU has accepted my family, the time that my dad had here and the time that I had here as a student as well as my brother,” Harrison said. “There’s nothing negative we can say about NAU or Flagstaff, and I really appreciate how coach (Chris) Ball has taken me in as a family member as well.”

The Beemillers are still a presence, coming to every home game. Harrison is aiming to help the family’s legacy live on.

Harrison said his father inspired him to turn to coaching after years of playing for him in youth football and watching how he touched the lives of other players around him.

“As a coach, my dad inspires me. He was my youth coach growing up and early on I knew that’s exactly what I wanted to do,” he said. “I wanted to have the same impact on kids that he had on me growing up as a coach as well as my father.”