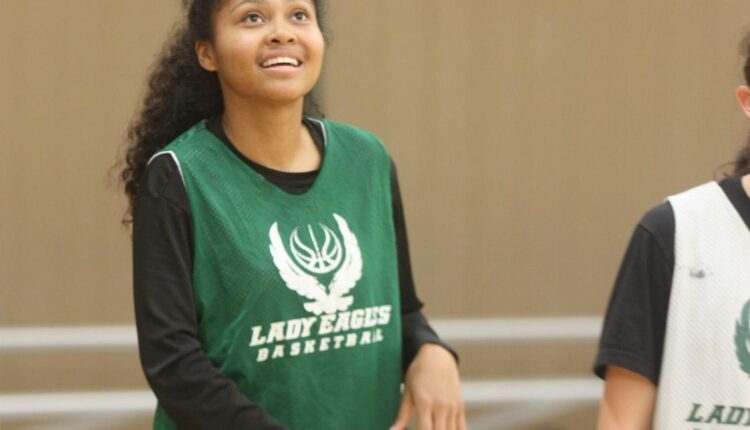 The Flagstaff Eagles girls basketball team had just won one of their games in an exhibition tournament in Henderson, Nevada, in late December. A mother in the stands came up to Unique Begishie, a junior forward for the Eagles, and introduced herself and her daughter asking for a few minutes of time.

It’s not the first time someone noticed Begishie on the court and took away some motivation.

Begishie, since her birth, has dealt with a brachial plexus injury, limiting the motion in her right arm to near the point of paralysis. She can move the arm up and down, and wiggle the fingers a bit, but not all of the motion one might ask for to play basketball at a high level.

However, Begishie has improved drastically in her three years at Flagstaff and is a contributor on a varsity team with a solid reputation in Arizona high school basketball.

“This parent came up to me. And she’s like, ‘I’m so glad that you’re able to play the sport that you love, and I tell my kids all the time that they can do anything or be anything they want, whether they have a disability or not, ‘ and she told her daughter that,” Begishie said.

Begishie started playing basketball at age 5. Despite her ailment, she always played sports with her three brothers, and said they never quite took it easy on her in competition.

She joined a competitive team in sixth grade, but was unsure at first about how she would fit into a program with just one arm at full strength.

After a few years, citing her eighth-grade year, she figured out her style and place on the team.

“At first I was discouraged of the way people would look at me. But I realized that this is how I am. It doesn’t affect me in any way. I don’t think about it on the court,” Begishie said.

Her middle school team played in a league championship game. She performed well, and her confidence took off.

That’s where Eagles coach Tyrone Johnson started hearing about a tall girl — now listed at 5-foot-9 — who could really perform, despite an expected physical issue.

She joined the ranks of the Eagles, playing on the freshman team in her freshman year and the JV team the season after. It was in the preseason of this season, after making the varsity squad, though, that Johnson knew just the type of player he was getting.

“I mess around with the girls sometimes on the court, and we’re playing one-on-one. She did a move that almost made me stumble, and I said, ‘That’s it, you can play, I’m done messing with you,’ because at that point I noticed she had that confidence you need to play,” Johnson said.

Since then, Begishie has simply been another player on the team, with the same expectations of greatness the other girls have in a defending 4A Conference runner-up group.

“You, honestly, just see past that because she does everything that everyone with both arms can do, and sometimes even does it better. So everyone sees her as a basketball player because that’s what she is,” Johnson said.

Begishie said her teammates and coaches don’t act any differently around her, as they know she is just as capable as anybody else and expects herself to do well on the court.

She is almost always smiling in practice and games, too. Playing, despite some odds, brings her just a bit more joy.

Plus, knowing she’s making a difference for the multiple people that come talk to her about how she means something to them is nice, too.

“I’m glad it doesn’t affect the way I think about myself. It brings me a lot of happiness,” Begishie said. “I like it, and it gives me confidence because I can help people.”