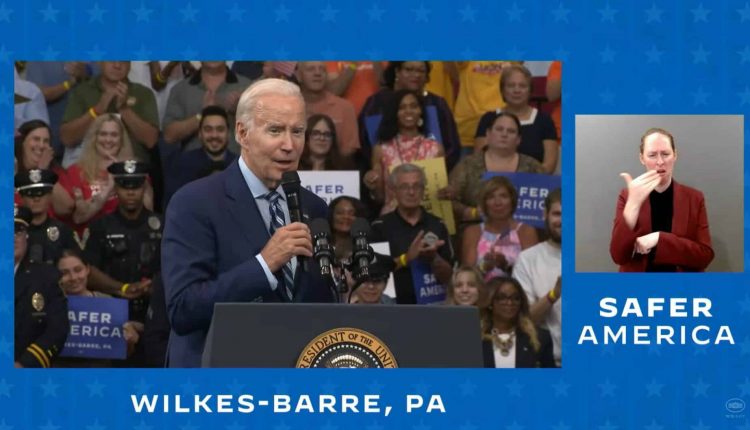 WILKES BARRE, Pa. (CN) — President Joe Biden made a stop in election battleground country Tuesday to rally votes for the Democratic side of the ticket in the upcoming midterms, questioning the lack of bipartisan support for his crime-prevention plan.

Speaking from Wilkes University in Wilkes Barre, Pennsylvania, Biden pitched the plan as a way to invest in effective and accountable community policing that builds public trust and public safety by investing in mental health, social work and drug counseling services while also outlawing certain dangerous policing tactics — like chokeholds and no-knock warrants.

“When it comes to public safety, the answer is not to ‘defund the police,’ it’s to fund the police,” Biden told the crowd of about 500 people on Tuesday.

For a total infusion of $37 billion, Biden’s plan would allocate $15 billion for grants to programs that help prevent violent crime through public health; $13 billion for the hiring and training of 100,000 police officers in various communities over five years; $3 billion for clearing court backlogs and outstanding cases; and $5 billion toward preventative violence programs.

Pennsylvanians are slated to pick replacements for Governor Tom Wolf and U.S. Senator Pat Toomey in the November race, and the Democrat running for governor, state Attorney General Josh Shapiro, stood with Biden on Tuesday. Lieutenant Governor John Fetterman, the Democrat running against TV doctor Mehmet Oz for Senate, was not at the rally but is expected to march with Biden in Pittsburgh’s Labor Day parade on Sept. 5.

Fetterman’s been off the campaign trail for months while recovering from a stroke, but in the polls the 6-foot-8-inch lieutenant governor known for dressing in shorts and sweatshirts continues to lead his cardiothoracic surgeon opponent by double digits.

The president said his plan would mark the renewal of a ban on assault-style weapons, speaking of a short-lived law with similar focus that he had helped craft during his time as a U.S. senator in 1994.

While campaign messaging from the Republican candidate for governor, Doug Mastriano, has attempted to link Pennsylvania’s rising homicide rate with Shapiro’s lack of action in office, state statistics show that the overall crime rate has dropped at the same time.

Shapiro has a record of cracking down on gun trafficking and ghost guns since he took office in 2017. Biden endorsed the candidate as “a champion for the rule of law” Tuesday, asking voters to elect him as well as Fetterman.

Biden also spoke Tuesday about last years U.S. Capitol riot, emphasizing that it was law enforcement officers who defended Congress members against a mob of people claiming against all evidence that the 2020 election was stolen from one-term President Donald Trump.

Both Mastriano and Oz are endorse by Trump, and Mastriano was actually in the crowd outside the U.S. Capitol when the insurrection occurred on Jan. 6, 2021.

“Don’t tell me you support law enforcement if you won’t condemn what happened on the 6th,” Biden said. “There’s no place in this country for endangering the lives of law enforcement.”

Biden said it is up to voters to hold every elected official’s feet to the fire and ask them if they are for banning assault weapons. “‘Yes or no?” Biden said. “If the answer’s no, vote against them.”

Spurred by a mass shooting in a supermarket in Buffalo, New York, and a school shooting in Uvalde, Texas, a bipartisan group of legislators worked together to pass. While it expanded background checks for gun buyers under the age of 21 and close the so-called ‘boyfriend loophole,’ by including serious dating partners in a federal law that prevents people convicted of domestic abuse from buying guns, Biden has maintained that more action is needed. “We have to act so our kids can learn to read a school instead of learning to duck and cover,” Biden said Tuesday.

He argued that service members must receive significant training, extensive background checks, mental health assessments, and lessons on how to lock up and store their weapons responsibly when they are given firearms.

The new gun safety legislation championed by a bipartisan members of Congress in June followed mass shootings at a supermarket in Buffalo, New York, and an elementary school in Uvalde, Texas. In addition to expanding background checks for gun buyers under the age of 21, the law closes the so-called boyfriend loophole by including serious dating partners in a federal law that prevents people convicted of domestic abuse from buying guns.

Biden has maintained, however, that more action is needed.

“We have to act so our kids can learn to read a school instead of learning to duck and cover,” Biden said Tuesday.

Before Labor Day, Biden will be back in Pennsylvania on Thursday for a prime-time speech that the White House said will address “the continued battle for the soul of the nation” and defending democracy.

Former President Donald Trump meanwhile is scheduled to host a rally in the state Saturday.