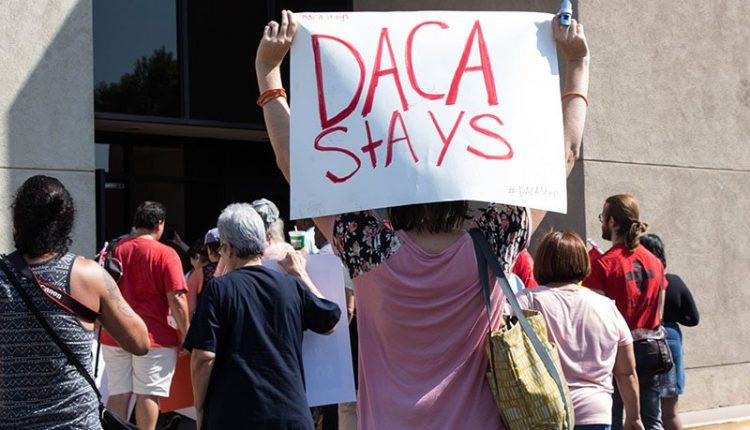 WASHINGTON – The Biden administration reaffirmed its commitment Tuesday to DACA, officially posting regulations to extend the 10-year-old program that has protected hundreds of thousands of young undocumented immigrants.

The rule, which takes effect Oct. 31, makes few changes to the Deferred Action for Childhood Arrivals program and it does not move it any closer to becoming law – a key shortcoming for advocates who lived through Trump administration efforts to overturn the program.

“Any program that is created by one president can be undone by another,” said Jose Patiño, vice president of education and external affairs at Aliento. “That is an issue we have seen with DACA.”

Patiño said groups like his “are looking at all avenues” to pressure Congress into passing comprehensive immigration reform that would enshrine and expand DACA.

But critics said that is not likely to happen, noting that DACA had to be approved as a regulation because Congress could not reach agreement on immigration legislation. Matthew O’Brien, director of investigations at the Immigration Reform Law Institute, called DACA “a federal regulation that doesn’t have any statutory authority underlying it.”

“The fact is that Congress put restrictions on immigration for a reason and the president, whether it is Obama or Biden, doesn’t have any authority to unilaterally change those because they don’t like the restrictions that are in place,” said O’Brien, a former immigration judge.

It was during then-President Barack Obama’s first term that the Department of Homeland Security first enacted DACA as an administrative rule that said Dreamers – undocumented immigrants who were brought to the U.S. as children – would not be priorities for removal.

The program deferred deportation of those immigrants for up to two years, protection that is renewable. It did not provide a path to citizenship, instead granting them “lawfully present” status, which allowed them to legally obtain work permits, drivers’ licenses and more.

Immigrants had to apply for the protection, paying fees and showing they had continuously been in the U.S., had a clean record and were in school or the military, among other requirements.

Critics have said since the start that DACA is an abuse of executive power and former President Donald Trump vowed to overturn it. Those efforts ultimately failed, but legal challenges since have had some success stifling the program.

The most recent ruling, from a federal district court in Texas, said DACA could continue to protect current recipients, who can reapply for coverage. But it said DHS cannot accept applications from Dreamers not previously covered.

That injunction barring new applicants would still apply under the rule posted Tuesday. And the final rule does not expand on the requirements or eligibility for DACA recipients, some of whom are now reaching upward of 40 years old.

“We have been advocating for the program to be expanded. By that we mean the opportunity dates,” he said. “We were hoping that with this new rule it would change some of those deadlines.

“It seems that nothing really changed for DACA recipients or the community,” Patiño said.

Andrew Arthur, resident fellow in law and policy at the Center for Immigration Studies, said that “all of this is really just kicking the can down the road in respect to DACA.”

“The administration would be better off simply letting the court rule and sending it over to Congress who actually has the authority to grant amnesty – or not – to this population of people,” Arthur said.

He called DACA something of a relic, a remnant of the Obama administration. Even though DACA has been beneficial to a large number of immigrants, he said, its practicality is starting to wane.

“They are certainly a sympathetic population of people,” Arthur said of Dreamers. “Although I will note that many children covered under this are approaching middle age based on criteria for it.”

Julia Gelatt, senior policy analyst for the Migration Policy Institute, said that posting the new rule in the Federal Register is a way to give for the program to have a “strong legal footing” against ongoing court challenges.

But without action by Congress, she said, the program can only hold out for so long.

“Ultimately, Congress should be legislating on immigration,” Gelatt said. “The only kind of real relief for Dreamers would be legislation offering them a path to legal status.”

She agreed with Patiño that Congress should not only codify DACA but expand it, including a pathway to citizenship. She said “DACA has enabled beneficiaries to contribute a lot.”

“We’ve seen them working all kinds of vital jobs in the pandemic, increasing their earnings, paying higher taxes, and really contributing to the country,” Gelatt said.

While the two sides of the issue don’t agree on much, they all seem to agree that Congress needs to act on the question.

Even though O’Brien does not think congressional action is likely, that does not mean it’s not possible. Arthur said Congress can act at “any time,” and that the Biden administration should focus its efforts there.

“It would be better for the administration to propose some real changes that would pass with a bipartisan majority in the House and 60 votes in the Senate that would beef up border security and make some meaningful changes to lawful immigration in the United States and at the same time provide real benefits that would allow the DACA population to move on with their lives,” Arthur said.