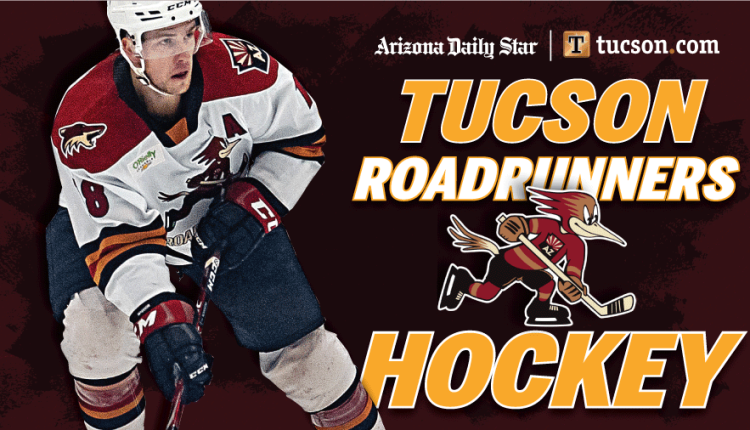 There’s something about that first skate on home ice to start the season that apparently helps the Tucson Roadrunners crank things up a notch.

A 5-3 Roadrunners victory over the Bakersfield Condors in Tucson’s home opener Saturday night marked the fifth straight season the Roadrunners have been victorious in their first outing inside Tucson Arena. Tucson moved above .500 on the young season, with Saturday’s win following a road split last week to kick off the team’s new 72-game American Hockey League schedule.

“I think we were just excited to play in front of our fans. I think especially this time,” Tucson coach Steve Potvin said, noting that much of Tucson’s preseason leading up to its road opener last week was spent in the Las Vegas area while Tucson Arena was reconfigured for Disney on Ice. “A whole summer, plus no playoffs last year, and then to finally get the opportunity to play.

“Our guys were just championing at the bit to get going.”

Cracknell, in his first home game with Tucson, got the Roadrunners on the board less than a minute into the game on the assist from Dineen. After Bakersfield’s drew the game square midway through the opening frame, the Roadrunners would pour it on.

Cameron Hebig, Laurent Dauphin, Dineen and Carcone would score in order in the second period to blow the game open.

“We’re obviously, you know, the heart of the team. We’re gonna get things going,” said Dineen, who, like Dauphin, managed a goal and an assist. “Everyone can contribute in their own ways. But a lot of stuff goes through the main guys – the guys that have been around knowing the system. It’s early on. So we have a lot of new guys so we got to kind of show the way.”

The win was a homecoming of sorts for Dauphin, a once-and-again – and now again – Roadrunner who rejoined the family tree of the NHL’s Arizona Coyotes this offseason for the third different time in his career.

“I think I have a good vibes in this building,” Dauphin said. “We got a nice goal from a fourth line to start and then the power play got going. It’s nice to get a couple on the power play and get the special teams going.”

Tucson goaltender Ivan Prosvetov has now started a season himself 2-0 for the fourth time in his four years with the Roadrunners. Prosvetov stopped 28 of 31 Bakersfield shots on goal Saturday, and now has turned away 70 of 75 total attempts against this season; that includes 13 of 14 in a relief appearance last Saturday, and 29 of 30 the night before to open the season in a 2-1 Tucson win at the Henderson Silver Knights. Through three games, Prosvetov owns a 1.96 goals against average and .933 save percentage.

“That’s the calmness we’ve seen. He’s made some real massive improvements this summer,” Potvin said of Prosvetov’s performance Saturday and so far this campaign.

Hamblin and fellow Condor Ty Tullio each scored in the third period as Bakersfield attempted to climb back into the game, but the Condors didn’t have enough time to mount a full comeback. In net for Bakersfield, former roadrunner Calvin Pickard carded 18 saves on 23 Tucson shots on goal.

With a rematch against Bakersfield on tap for 4 pm Sunday at Tucson Arena, the Roadrunners are now 6-1 all-time in a season’s first game at Tucson Arena. Tucson defeated the visiting Texas Stars 4-0 last season to open their home schedule. The year before that, the Roadrunners posted a 2-1 win over the San Jose Barracuda in Tucson Arena (despite being technically the visiting team in their own home building) to open the shortened, COVID-19 affected 2021 slate.

The year before that, the Roadrunners defeated Texas 2-0 to start things off at home, following a 6-4 win over the San Diego Gulls the season prior. Tucson’s only loss in their first game of a season at Tucson Arena came in October 2017, when they lost 7-6 to the Gulls. But the Roadrunners did defeat the Stockton Heat, 6-5, in the first home game of the club’s first Southern Arizona campaign, back in 2016.