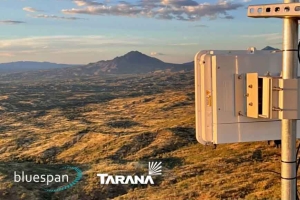 bluespanan experienced US internet service provider (ISP), and taranaa company that created the next-generation fixed wireless access (ngFWA) technology with their G1 broadband platform, has announced a number of hybrid network projects that will result in more than 750,000 homes passed across Arizona and Washington state.

Bluespan has operated in Arizona and Washington since 2001, offering primarily fixed wireless broadband service. Their “no cutting corners” business philosophy has earned them a great reputation with customers, and they pride themselves on providing better customer service and faster support than the “big guys” because they are local to the cities in which they serve.

Tarana has made major waves in the broadband industry since launching the G1 platform, which overcomes previous fixed wireless limitations through operation in non-line-of-sight conditions and in environments with heavy radio interference. Supported by a ngFWA technology that came to life in 2021 after 12 years of research and development and a complete rethink on reliable wireless broadband, G1 is now being deployed by over 200 ISPs worldwide.

Bluespan was an early adopter of Tarana technology, using G1 to overlay their entire network in Flagstaff, Arizona in order to provide better internet speeds to their customers. Before ngFWA was introduced in the area, locals had only two options for broadband service: 10 Mbps DSL or the legacy fixed wireless technology from Bluespan that also maxed out around 10Mbps and struggled to reliably cover all of the homes on their network. After taking just one month to deploy G1, Bluespan now offers plans up to 500 Mbps in Flagstaff and no longer faces capacity limitations on densely populated networks. “G1 has been game changing in this area that had never seen more than 5 or 10 Mbps.” says Scott Stace, CEO of Bluespan. He reports many retained WISP customers since upgrading them to Tarana, and an influx of new subscribers who are thrilled about their new internet speeds.

Stace and the Bluespan team are using a hybrid approach to achieve these improved service plans. Throughout their Arizona networks they are deploying fiber to 15 newly G1-equipped towers, and using Tarana to bring broadband from the tower to the home at scale. Stace states, “Marrying fiber and Tarana’s capabilities have made us well-poised to do edge-out expansion in underserved areas. This combination allows us to pass more homes than anything else. It really is the only cost effective option.”

Bluespan has developed a similar deployment in Sanoita, Arizona, a popular wine region that also lacked viable options for reliable, high-speed internet. Nestled beyond a mountain pass in a rural area, Sanoita was nearly impossible to serve with fiber or cable alone. Instead, they deployed fiber to one Tarana-backed tower overlooking the greater Sanoita and Elgin communities and are now offering them 500+ Mbps internet service.

With additional plans to ramp up G1 deployments in their Washington service footprint, Bluespan targets a minimum of 30 Tarana towers across two states within the next six months. Basil Alwan, Tarana CEO, adds, “It has been great to see Bluespan grow with G1 over the past year. We are very pleased to be enhancing their business and look forward to supporting more network upgrades and new deployments in months and years to come.”

Stace affirmed, “We don’t have to be afraid of wireless. Tarana has proven that with her roadmap, vision, and engineering talent, and it’s only going to continue. Nothing is as effective for WISPs as Tarana.”

Bleeding and in Pain, a Pregnant Woman in Louisiana Couldn’t Get Answers