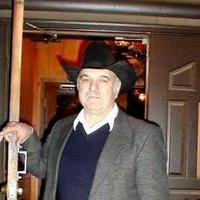 Bob Lupo passed away Monday, May 23, 2022 due to complications from a serious vehicle accident. Bob was born and raised in Arlington, MA. Upon graduation from high school, he was enlisted in the US Coast Guard. He was stationed in Hawaii where he earned his pilots license. Later he was stationed at Iwo Jima. Bob was extremely proud to serve as a US Coast Guard and his time served at Iwo Jima.

After serving 4 years in the Coast Guard, he headed west to Denver, CO. There he worked for Hilton Hotels and Crooks Palace. He also attended Farrier School to educate, access, treat, and maintain the health and soundness of his horses. In 1975, Bob moved to Flagstaff and purchased Horsemen Lodge. He spent the next 39 years expanding the restaurant and building his home on the property. It was there that many locals became Friends of Bob. Bob considered his staff family, serving family style supper each night. In 2001, Bob was inducted into the AZ Restaurant Hall of Fame.

Asteroid 6087, discovered in 1988 by CS Shoemaker and EM Shoemaker, was named “Lupo” by the USGS.

During his time in Flagstaff, Bob was very involved in the community, supporting the AZ Farm Bureau, AZ Cowpunchers Association, the Pine Country Rodeo, and he served as Chairman of Directors for Doney Park Water.

Bob sold Horsemen Lodge in 2014 and moved to Sun City to enjoy one of his life passions – year-round golf.

He was preceded in death by his parents and siblings. Bob is survived by his significant other, Sharon Mowbray of Phoenix; Nieces Jane Kelley (Paul) of MA, Elaine Kelley of MA, Madeline Sheets (Stu) of MA, Jann DeCirce (John) of FL, and his nephew Gary Napolitano of MA.

At Bob’s request, his remains were cremated, and his ashes will be scattered in MA at a later date.

Fond memories and expressions of sympathy may be shared at www.almoore-grimshaw.com.

REST IN PEACE Bob Lupo, you are missed and loved. yup!

Hundreds gather in Phoenix for March For Our Lives rally, demand gun safety