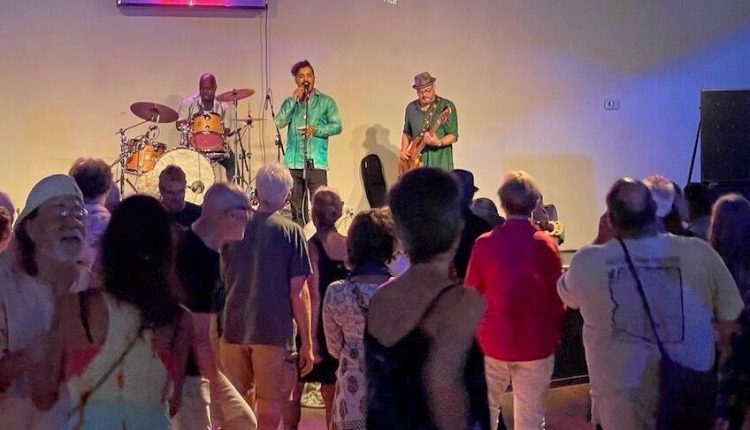 Magic on the dance floor.

When Indian-born bluesman Aki Kumar played the ninth annual House Rockin’ Blues Review at El Casino Ballroom on Friday, Aug. 5, it didn’t matter that he spent half of his 90 minutes singing in his native Hindi and that no one could understand what he was singing.

There was something incredibly infectious about Aki Kumar’s music and performance that lured Friday’s audience of several hundred onto the dance floor.


The soundtrack to those foreign lyrics given a bluesified makeover was poppin’ with an infectious energy that lured the crowd of several hundred away from their tables and onto the dance floor. Kumar proved a universal truth about music: When it’s good, it defies labels and language barriers.

And Kumar’s music was good. Really good in that way that has you bobbing your head and doing an awkward two-step even if you don’t have a dance partner.

Kumar’s concert at El Casino — a fundraiser for KXCI community radio — was his first ever in Tucson. Judging by the audience’s thunderous applause and embrace, it certainly won’t be his last.

Bluesman Aki Kumar was accompanied by a trio of musicians including standup bass player Vance Ehlers.


It would be easy to say that part of the allure of his show was curiosity: What does Bollywood blues sound like exactly and how does a guy from Bombay, India — nearly 9,000 miles from the El Casino Ballroom in South Tucson — open his mouth and sound so much like a Chicago bluesman?

Kumar answered with a soulful baritone and dynamic sometimes frenetic stage presence that conjured the soul of blues from a place you’d hardly expect from someone who didn’t grow up listening to it. He split his show evenly between songs sung in English and in his native Hindi, drawing from his four studio albums and handful of singles recorded over the last decade.

He played harmonica like he was Eddie Van Halen unleashing a monster guitar solo in “Eruption,” long bursts that had some in the crowd whistling support. He effected a little bit of a Prince swagger — the R&B legend’s sexy finger wag and subtle hip twist — when he sang “Ruxanna” off his critically-acclaimed album “Hindi Man Blues,” and nearly nailed the nasal twang on George Jones’ 1965 classic country tune “Nothing Can Stop My Loving You.”

He dug deep in the blues vault for “Sonny Boy” Williamson’s late 1930s harmonica-blazing “Early in the Morning” (aka “Bout the Break of Day”) before glimpsing the genre’s future with his latest original single, “Zindagi” (pronounced zin-duh-gee).

With each song he sang, whether in Hindi or English, the crowd on the dance floor swelled and a sea of ​​mostly older folks tried to keep time and rhythm to Kumar’s energy.

That’s another universal music truth Kumar taught us: If music moves you — move.

Tucson blueswoman Heather Hardy was backed by The Dusty City Blues Band when she opened for Aki Kumar at El Casino Ballroom on Friday night.


Tucson blues artists Heather Hardy & The Dusty City Blues Band opened the show, which highlighted Hardy’s wonderful blues vocals and uncanny chops on electric violin. At times her violin sounded like Kumar’s harmonica and other times took on the sonic flare of a saxophone.

Hardy and the band are set to play Hotel Congress’ Cookout show on the plaza stage Aug. 28. For tickets and details visit hotelcongress.com.

Why This Road Trip Is Worth Taking