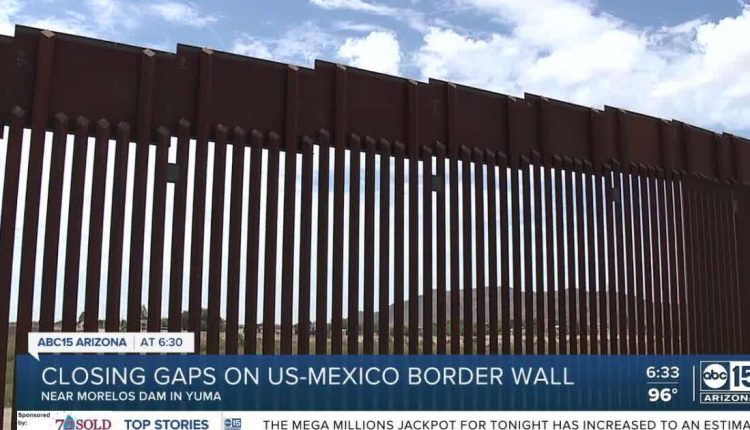 YUMA, AZ — The Biden Administration has given the green light for US Customs and Border Protection to close gaps near the Morelos Dam in order to protect migrants when crossing.

ABC15 crew went down to the area where four gaps will be closed, in front of the Morelos Dam, an area known to locals as “The Gap.”

Dennis Cook and his wife moved to the furthest point on 16th street, which takes you right to the border wall in Yuma.

“Half a mile down further there’s a great big gap,” he said while pointing to several gaps not far from his home.

The couple moved here nine years ago because of the space available.

“I owned wrecking yard and I like my junk,” said Cook.

Though, at the time they moved…

“The wall didn’t exist….and they would cross right here by my house,” he told ABC15.

They often would see migrants walking at all hours of the day and night.

“[They asked for] water once in a while. We’ve had kids that wanted food.”

After the construction of the border wall began, Cook noticed the number of migrants crossing started going down from the thousands he’d see weekly. Many seeking one thing:

“They wanted out of their country to have a better life,” he added.

As we were recording the gaps along the border, we noticed a woman and her child waiting on the US side.

“Why did you come here?” we asked.

“In Honduras there are no jobs, and there is a lot of crime,” she said in Spanish.

Mayra Lopez is fleeing an abusive situation at home.

“How old is your little girl?” we asked.

“She is four years old. She’ll be five in October,” she responded.

Mayra is seeking asylum in the United States and a better future for her children.

Her son stayed back home in Honduras.

“Are you waiting for Border Patrol to come?” ABC15 asked.

“Yes, so they can process me,” May responded.

Yuma County Supervisor Jonathan Lines says this is a step in the right direction.

“In these areas we are seeing on average 1,000 people a day and specifically, around the area of ​​Morales Dam,” Lines said.

Adding closing these gaps will allow Border Patrol to narrow their efforts to continue to keep the border safe, while helping protect migrants all at once.

“We had a five-year-old who drowned at the beginning of this month, who was separated from his family as they were crossing the water. And then three to five deaths a week in (the) Yuma sector from people coming across. These are tragic numbers,” the Yuma County Supervisor told ABC15.

The Department of Homeland Security says the Yuma Morelos Dam Project will close four gaps located within an “incomplete border barrier project” near the dam.

According to Yuma Mayor Douglas Nicholls, there are dozens of other gaps that still need to be closed.

“You know they want a better life for their child apparently. I really don’t blame these people for wanting to come over here. I really would just like them to do it legally,” said Cook.