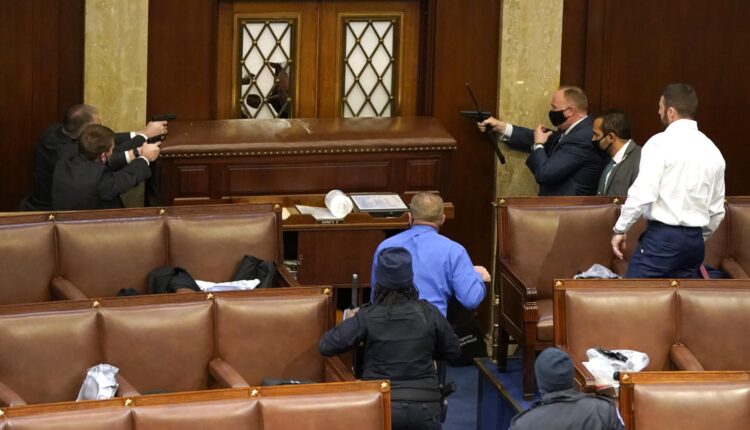 Bowers will be honored with award for courage as D.C. nears Jan. 6 anniversary

WASHINGTON – On the eve of the second anniversary of the U.S. Capitol insurrection, congressional Democrats and dozens of veterans on Thursday in a press conference called on incoming House Republican leaders to condemn political violence and hold their members who supported the attack accountable for their actions.

Meanwhile, President Joe Biden is scheduled on Friday to host a ceremony where he will speak about the Jan. 6 attack, and award medals to a dozen people who “demonstrated courage and selflessness during a moment of peril for our nation,” according to a White House official.

At the veterans’ press event near the Capitol Reflecting Pool, House members Jason Crow of Colorado, Chrissy Houlahan of Pennsylvania and Mikie Sherrill of New Jersey talked about how their values to uphold democracy started with their military service when they took an oath to protect the Constitution.

They voiced their concerns about how many veterans were part of the Jan. 6 mob.

“When you raise your right hand, and you take that oath to give everything to your country, that is a lifetime commitment,” Crow said. “A lifetime commitment and uniform, but continuing to fight for and preserve our democracy, and never has that been more important than the era that we live in right now.”

House Democrats have held hearings and issued reports that have shown the growing worries about extremism among veterans and have recommended the U.S. Department of Veteran Affairs protect veterans from those groups. Separately, an analysis by NPR found that 1 in 5 of the defendants charged for their involvement in the riot were veterans.

“While the individuals who descended upon and disrespected these storied halls represent a very small fringe faction of the population, it is no secret that they were inspired by some of the most senior officials in our government who failed to accept the results of the 2020 election,” said Houlahan.

She, Crow and Sherrill were in the House chamber during the insurrection, when hundreds of pro-Trump supporters stormed the Capitol in an attempt to prevent members of Congress from certifying the results of the 2020 presidential election.

President Donald Trump was impeached for a second time for his role in the insurrection, and a special committee investigating the attack unanimously voted to refer him and others to the Justice Department for potential criminal charges, including inciting or aiding an insurrection.

The special House panel investigating Jan. 6 found that Trump was directly involved in efforts to pressure state officials in Georgia, Arizona and elsewhere to overturn the 2020 election results in their states.

This will be the first time Biden will give out the Presidential Citizens Medal, which is awarded to individuals who have done an extraordinary act of service for the United States or fellow Americans.

Among the recipients will be Eugene Goodman, the U.S. Capitol Police officer who is credited with diverting rioters from the Senate floor, allowing senators and staff to evacuate.

The president will also posthumously award a medal to the late Brian Sicknick, a  Capitol Police officer who was injured while responding to the Jan. 6 attack and later died.

Michael Fanone, a Metropolitan Police Department Officer who responded to the Jan. 6 attack and was injured, will also receive a medal. Fanone later resigned, and has continued to put pressure on congressional Republicans to acknowledge their role in spreading the false narrative that the 2020 presidential election was stolen.

He most recently sent a letter signed by more than 1,000 veterans to top Republican leaders on Wednesday, calling on them to denounce political violence and the Jan. 6 attack.

Fanone, who was at the press event, said he wants MAGA Republicans to know “that myself and thousands, tens of thousands of veterans and members of the law enforcement community are paying very close attention to the things that they’ve said.”

He singled out Reps. Marjorie Taylor Greene of Georgia and Kevin McCarthy of California, who is struggling to garner enough votes to secure the position of speaker of the House.

“This type of chaos will happen every single day in the House as some of the most extreme politicians our country has ever seen hold our democracy hostage,” Fanone said about the speaker race that has continued for three days.

Without a speaker, no members of Congress can be sworn in and the chamber cannot conduct government business such as committee meetings or constituent services.

The veterans’ press conference was hosted by Courage for America, an initiative organized by progressives to speak out against extremism and counter the GOP House, and Common Defense, a grassroots organization that works to promote progressive ideas in the veteran community.

A ‘new sense of hope’

Sherrill, who served in the Navy for nine years, said she remembers being crouched in the House gallery, a cell phone in one hand, calling her loved ones, and a gas mask in the other.

“I had this great sense of sorrow that it had come to this,” she said about veterans who attacked the Capitol. “The other side of my brain had really a sense of rage. How dare they?”

“And yet as I sit here today … I think about how far we’ve come with the January 6 hearings,” she said, adding that many people who ran as election deniers lost their campaigns.

“I feel a new sense of hope,” Sherrill said. “Our democracy is stronger and more resilient than ever, and so it’s with almost a sense of joy, that I start this new term in Congress, because I know the American people have our back.”

Body found on Tucson’s east side ruled a homicide