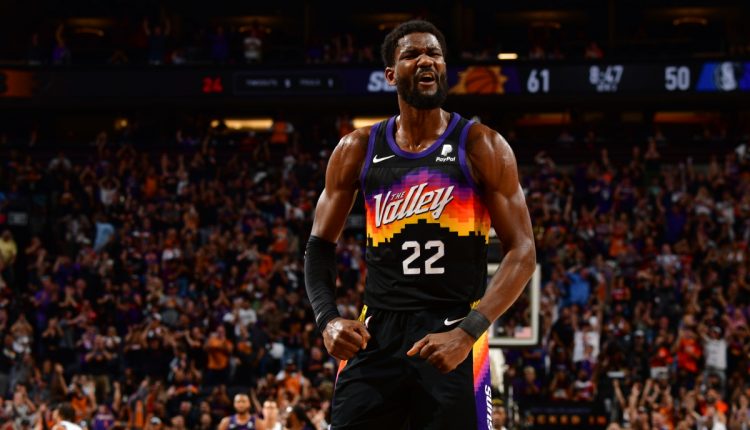 PHOENIX, AZ – MAY 10: Deandre Ayton #22 of the Phoenix Suns celebrates against the Dallas Mavericks during Game 5 of the 2022 NBA Playoffs Western Conference Semifinals on May 10, 2022 at Footprint Center in Phoenix, Arizona. NOTE TO USER: User expressly acknowledges and agrees that, by downloading and or using this photograph, user is consenting to the terms and conditions of the Getty Images License Agreement. Mandatory Copyright Notice: Copyright 2022 NBAE (Photo by Barry Gossage/NBAE via Getty Images)

It didn’t take long for Deandre Ayton to sign his max offer sheet from the Indiana Pacers. It took even less time for the Phoenix Suns to match it.

Phoenix has officially matched Indiana’s four-year, $133 million offer to the restricted free agent big man. As a result, Ayton will remain in Phoenix.

ESPN’s Adrian Wojnarowski said Phoenix matched the offer “as soon as” it received the sheet from the Pacers. If Indiana or any other team wants Ayton, they will have to wait a while to get him.

“Deandre Ayton returns to Phoenix and can’t be traded without his consent for a full year,” Wojnarowski wrote.

After reaching the NBA Finals in 2021, the Suns posted the best regular season record this year, going 64-18. However, they were eliminated by the Dallas Mavericks in the Western Conference Semifinals.

Still, with Phoenix ostensibly trying to contend moving forward, it makes sense for them to go all out to retain a key piece like Ayton, even if they have to pay the luxury tax to do so.