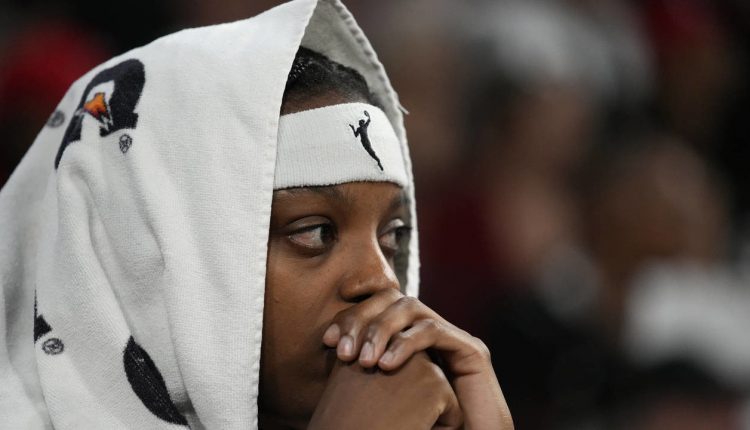 PHOENIX — A cloud of fear and sadness hovered over the Phoenix Mercury’s season as Brittney Griner, their friend and teammate, sat in a Russian prison.

The Mercury pressed on, tried to focus on basketball when they could, “BG” always on their mind.

The difficulties kept coming like a series of blows to the body and soul.

Phoenix’s big-splash acquisition opted for a midseason “contract divorce.” One of the best players in WNBA history got injured. The team’s leading scorer went out due to personal reasons. Another key player ruptured her Achilles in the first game of the playoffs.

Hard to imagine a more difficult season in any sport anywhere.

“This season, I don’t think there’s a sports team that has endured everything that we endured as the Phoenix Mercury, and it’s been completely exhausting,” Mercury guard Sophie Cunningham said.

The woes began during the offseason.

Many WNBA players supplement their income by playing on lucrative overseas contracts. Griner had played in Russia since 2014 and was headed back during a break for the FIBA ​​Women’s Basketball World Cup qualifying tournaments in February.

Griner didn’t get past the Moscow airport. She was arrested after Russian authorities said a search of her luggage revealed vape canisters containing cannabis oil and she faced a 10-year prison sentence in what became a politically charged case.

Griner pleaded guilty to drug possession charges and was sentenced this month to nine years in prison. It was an expected outcome given the Russian court system — acquittals account for less than 1% of cases in criminal prosecutions — but the news hit the Mercury and rest of the WNBA hard.

Griner’s lawyers have appealed and US officials are hoping to work out a prisoner swap to bring her home.

Griner’s detention not only left the Mercury without one of the most dominating defensive players in WNBA history, it left them emotionally drained with each little bit of news — or lack of — about their friend and teammate.

“You can’t control this BG situation and I think that’s the most frustrating part,” Mercury forward Kaela Davis said. “We want to do something, but there’s nothing we can do and at the same time we still have practices and games. It’s frustrating.”

With Griner’s imprisonment in the back of their minds, the Mercury struggled to start the season, losing nine of their first 11 games. There were internal tensions, including an in-game shouting match between Diana Taurasi and Skylar Diggins-Smith, a social media dust-up between Diggins-Smith and coach Vanessa Nygaard.

In June, Phoenix announced it had agreed to a contract divorce with Tina Charles. The former WNBA MVP led the league in scoring last season with Washington and was the Mercury’s second-leading scorer before leaving after 18 games.

Phoenix kept plugging along and by the end of the season was still in position to make the playoffs for the 10th straight season.

Then Taurasi, the WNBA’s all-time leading scorer, suffered a quadriceps injury and missed the final five games. Diggins-Smith was next, missing the final week of the regular season and the playoffs for personal reasons.

The Mercury managed to clinch the WNBA’s final playoff spot on the final day of the regular season, but suffered another blow when Shey Peddy ruptured her Achilles tendon in Game 1 against Las Vegas.

“A roller coaster, very up and down, lots of turns, very much you don’t know what’s going to happen next, what the next day will bring,” forward Breanna Turner said. ”Making the playoffs is definitely an accomplishment in itself considering everything we’ve been through.”

A turbulent season over, the Mercury now hope for a better future, starting with a return home for Griner.