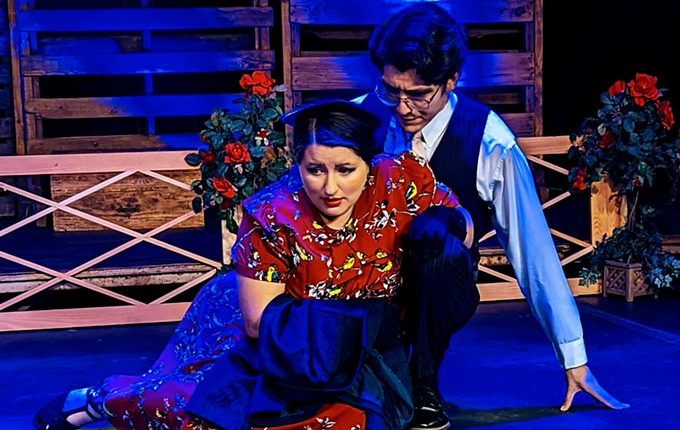 Tiffany Jensen and Rafael Acuna star in “Bright Star,” the Broadway musical featuring the Tony-nominated score by Steve Martin and Edie Brickell making its debut in Tucson Sept. 22 to Oct. 2.

For Tiffany Jensen, it was more than feeling comfortable with the bluegrass music or the comedic writing.

When she auditioned for the Tucson premiere of Broadway’s 2016 musical “Bright Star,” she felt a connection to the show’s main character, Alice, because they shared something deeply personal.

Like Alice, Jensen has lost a child, and it’s a feeling, she explained, that stays with you.

“I have four children. But in between my third and my fourth, I was about halfway through my pregnancy, and I lost that baby,” Jensen said. “Once you’ve gone through that, you never forget it. There’s a line in the show, ‘That had to have been the worst day of your life,’ and the line that she says is, ‘It was… and it is.’”

Inspired by a true event, the story set in 1945 North Carolina centers around the people associated with a literary magazine run by the now-hardened Alice — including a young newcomer she advises.

While there’s sadness and regret, Martin also filled many scenes with humor, and he and Brickell wrote several bluegrass songs to fit the time and era.

“Bright Star” takes place in two time periods, with several flashbacks to 1923. That means Jensen must quickly and seamlessly move from sophisticated woman to naïve teen, which she does by recalling her youth and imagining her, or, rather, Alice’s — future .

The authenticity Jensen displays in both time periods was a major reason director Dana Milne knew she had the right Alice almost immediately.

“She had that spark of being 17, which is something that I audition for,” Milne explained. “Playing 17, I think, is a breeze for her. Being 50 is harder, because it’s easy for a person to say, ‘Well, this terrible thing happened to me, so I’m shutting down and I’m going to become an older, darker me.’ But that’s not really what happens. She’s sarcastic, she’s witty and she displays all of those things at 17 that are still there, but they don’t come out as frequently.”

Milne had the cast during early rehearsals talk about what might have happened to the older characters between the present and the flashback to help form their onstage personalities. She also used period costumes to clarify when the shifts happen.

To Milne, “Bright Star” is about memories. To visualize that concept, she places the story in an attic. The cast is always present to either be in the action or to help set up the scene.

“I think that’s a really fun way to do it,” she said. “I told the cast that it’s like we’re playing basketball in LA or New York, and we’re on a concrete court and there’s a fence on the outside. If you’re outside of the fence, you’re just like anybody who’s watching basketball. You’re commenting on the action, but you are not in the action. And if you’re in the playing space then you are only engaged in the replaying of the memory.”

“As I was putting together the season, I started floating shows by various directors,” Wiese said. “I threw out the name ‘Bright Star,’ and she said, ‘I want to do that show, and it was like she was immediately on it. She knew it well and had a vision for it right away.”

The musical only played a few months on Broadway, but the reviews were mostly positive, and she believes it fits well in the current season.

“We had ‘Guy and Dolls,’ a classic, and ‘Bring it on,’ which is pop music, and we knew we wanted ‘Jekyll & Hyde’ for October,” Wiese explained. “So, bluegrass seems pretty different from all that. It was the contrast that made it interesting. You don’t hear a whole lot of blue grass in Tucson. I wish you heard more.”

That was Wiese’s mandate to use live music to enhance the production’s authenticity.

“To not have a real banjo or a real fiddle for a bluegrass show like this would not be right,” she said.

Though the show deals with some strong emotions, Jensen said there’s much more than sadness for the characters who inhabit “Bright Star.”

“Although there is a shared pain and loss between Alice and myself, there is a healing quality of this show that has helped me,” she said. “As we prepare to open this gorgeous show, I would say to potential audience members that it is a show about love, loss, healing and having the courage to follow your dreams.”

WHEN: Various times and dates Thursday, Sept. 22, to Sunday, Oct. 2