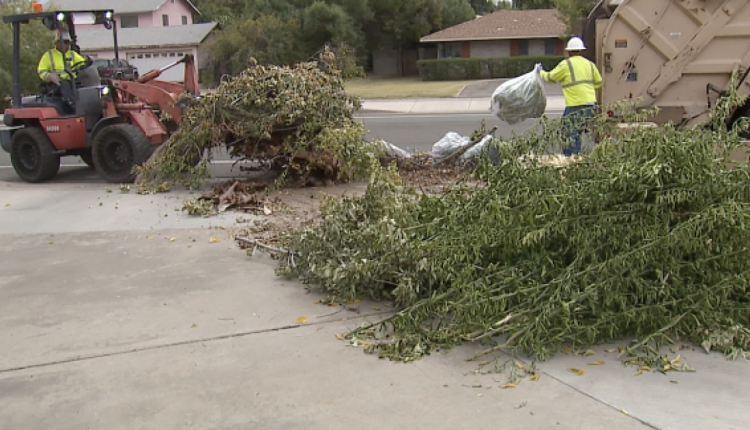 Bulk trash pickup expected to get back on track in Phoenix

PHOENIX — If you live in Phoenix, you’ve likely seen growing piles of trash on the streets that just don’t seem to go away.

The city says it’s because of a labor shortage.

It’s one that residents across Phoenix, like Donna Noel, are certainly feeling.

After eight weeks of waiting, Noel walked out of her house to hear the sounds of a tractor.

It’s an unusual sound to hear on the east side of the city, but one she welcomed with joy when she saw who was driving it.

Noel has lived in east Phoenix for the last 40 years and says, “We’ve never had a delay. I think it was supposed to be picked up in September, the first week of September,” she added.

So, they’ve been piling up about eight weeks of trash in front of their driveway.

“We have a lot of trees we’ve been trimming. I actually feel guilty about it, but…” Noel said.

“Happy it’s finally going away though?” we asked.

The City of Phoenix Public Works Department tells us staffing shortages have caused these delays.

The city is now providing incentives to fill those positions, like higher pay to employees that have a commercial driver’s license ($3.00/hour), a $2,500 signing bonus for new hires, and a $3,000 retention bonus for employees who stay with the city.

Felipe Moreno, the Assistant Public Works Director for the City of Phoenix, says this is already yielding results.

More people are applying, and they are starting to fill the vacant positions.

That’s not all though.

“We do have a mutual aid agreement which allows cities to help each other in times of need. So Phoenix has helped other cities in the past. So we are looking to Glendale, Gilbert, and Peoria. They have really stepped up and helped us on off days and weekends,” Moreno told ABC15.

In the meantime, he asks for the community to be patient until the city is able to get back on schedule.

“There’s an art to this, picking this stuff up,” said Noel as she watched the crew remove the trash in front of her driveway. She says she is happy and thankful her bulk trash is finally gone.

Phoenix should be back on schedule by November 21.