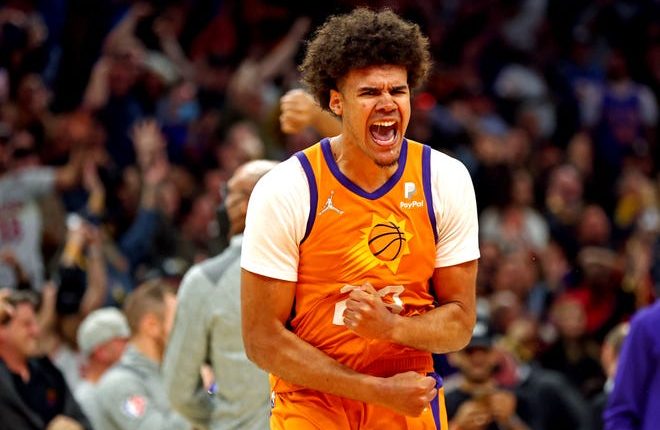 Candid Cam Johnson realists about his future with Phoenix Suns

Cam Johnson was enjoying his summer hanging out with his brother, Puff, at the University of North Carolina, Chapel Hill, when the news broke.

Kevin Durant is demanding a trade out of Brooklyn on the first day of free agency.

The Nets All-Star has Phoenix and Miami atop his trade wish list.

“It’s Puff’s teammates, my teammates (in the locker room at UNC). I’m like, nah man, don’t put me in this,” Johnson said. “And next thing you know, whoever it was, Windy (ESPN’s Brian Windhorst) or somebody on the TV was like naming the potential trade targets. Naming DA (Deandre Ayton), me, Mikal (Bridges). And I was like, come on man, but it’s the business.”

Johnson sat down with The Republic at his second annual CJ23 Invitational 3-on-3 basketball tournament Saturday to discuss everything from picking his all-time 3-on-3 team, revisiting Game 7’s flop to Dallas, Ayton receiving a rookie max extension, trade rumors and how he’d feel if the Suns ran it back with essentially the same team that won a franchise record 64 games last season.

“I’d love it. I’d love it,” Johnson said. “I think there is something to be said about continuity.”

Last year, you had the tournament back home (Moon Township, Pa). What’s it like to have it this year in Phoenix?

CJ: “It’s cool. The huge thing is that the Suns and Suns charities have done so much in helping me set up this event to where I can just show up, enjoy it. Watch. Take pictures. Last year, when I had it at home, I couldn’t even talk to people. Sponsors were there. Teams are playing. I wanted to talk to people, but I was like, ‘You’re playing on court this.’ Trying to make sure everybody is where they need to be, and the place isn’t burning down. It’s been great having it here. I love Phoenix. I love being here. Any chance I get to give back to the community here, I’m excited for it. The bonus I get to sit around and watch guys play all day.”

CJ: “Oh, that’s tough. I’m going (Michael) Jordan because I’m a huge Jordan guy. That’s one thing about me. I’m always going to be a Jordan guy. Jordan is the GOAT. I’ve been watching “My old Chicago Bulls games recently. He’s different and he’d still be the best player in the league if he played today. I’d go (Stephen) Curry and then I’d go ‘Bron (LeBron James). I’ve Got Curry or Durant in my head. That’s tough.”

How about go five like you have here (Teams are allowed to have three starters and two subs).

CJ: “OK. I want curry coming off the bench and I want a big. I want somebody just in case a team comes out with some size. Give me Shaq (Shaquille O’Neal).”

How has your summer been?

CJ: “It’s been great. Took a little trip back to the East Coast for a little bit. Two weeks. Spent some time in Chapel Hill with my little brother (Puff Johnson). Spent some time at home. But other than that, I’ve been working here. We’ve got a good group that’s been in the facility four, five days a week. Working. workout That’s something we kind of missed out on last year. We earned that by transitioning from the finals. We just finished at this time last year. Now we have this summer to just work on our games and get better. This is when it’s fun.

“This is the time you explore you game and work on things that you see from previous seasons where you can be better. Where you can impact winning more. It’s been a lot of fun working on those things. Just enjoying life.”

What are a couple of things you’re working on?

“That’s been the main focus. I think that’s something both Mikal and I are focusing on. Give our team an added dimension in the future.”

Have you moved past Game 7 (versus Dallas in the Suns lost by 33 points in the Western Conference semifinals)?

CJ: “No. I think as a competitor, as a hooper, there are certain games in your life that you’ll never fully move past. The next day, you wake up in the morning and it’s just weird that the season is over, but the sun still came up. There are still more things to fight for. The silver lining is that you get an extra chip on your shoulder. They’re adding up, too, I tell you that much, and it gives you motivation for every workout in the morning and every extra lift, whatever it may be. It’s like, we did get pounded in a Game 7 and yes, that was embarrassing.

“We all can agree on that and so let’s do our best to not let that happen again. It’s definitely taking a bad experience and trying to turn it into a tool in my tool box.”

Ayton ‘deserves every penny’ of $133M

What you think about Deandre Ayton getting the max extension (four years, $133 million)?

CJ: “It’s awesome. I’m so happy for him. He deserved it. And the money is one thing, but just having him back on the team and the opportunity to continue to build what we have been building is a lot of fun, but he deserves every penny of that. I’m so glad that this organization was able to keep him. I’ve really enjoyed playing with him the past three years and the sky’s really the limit for him.

“He’s literally like a 2K created player. You know how people create their guys in the video game. He dunks the ball, it looks kind of fake. Especially if I get a chance to stick around a couple more years, just to have the opportunity to watch his growth and development as I have over the past couple of years, it’s one of the cool things about this job.”

How are you feeling about the possibility of getting that rookie extension for you?

“There’s a business side of it which you open your eyes to and then there’s the personal side of it which you have to open your eyes to. There’s always a balance between the two. Definitely as the summer goes on, and we can call a “Spade a spade. All these trade rumors going around. That’s the business side of it and you have to expect a team to do what’s in their best interests and you have to expect individual people, in turn, to do what’s in their best interests, but the bottom line is I’ve really loved my time here and if we can get something done, I’d be very happy about it.”

Where did you first see Durant demanding a trade and Phoenix being high on his trade wish list?

CJ: “I was in Chapel Hill with Puff. I’m sitting in the locker room and the news breaks. It’s Puff’s teammates, my teammates. I’m like, nah man, don’t put me in this. And next thing you know, whoever it was, Windy (Brian Windhorst) or somebody on the TV was like naming the potential trade targets. Naming DA, me, Mikal. And I was like, come on man, but it’s the business. Like I said, it’s the business. If that’s something that gets done, then that was just part of God’s plan and you’ve got to keep on rolling.

If you guys run it back with basically the same team from last season, how would you feel about that?

CJ: “I’d love it. I’d love it. I think there is something to be said about continuity. I think there’s so much that we’ve learned in games from Year 1 to Year 2 to Year 3, I just think back to my rookie year of training camp and from a bird’s eye view, just how basic everything was that we’re talking about and how much it develops and changes as we progress. So, I think that continuity for us is huge.

“I talked to Coach Mont about this a little bit after the season, but since I’ve gotten here, we’ve been on a pretty steady escalation where we find a little bit of success and then take the next step and that Game 7 “was the first time we really got punched in the face. And it was the first time we really crumbled back down. I think there are a lot of valuable lessons to be found in that as a program, as a group of guys that have gone.” through that together, we kind of feel that pain and don’t want to feel that again.

“I think we’ve shown that we can play at a high level. We made it to the finals (in 2021). Came up two games short. Had the best record in the league last season. I think there’s a lot of positives “That can come out of these last three years. The opportunity for that continuity to continue to fight and find that break that results in a championship is worth every bit of years to myself and I’m sure everybody else in the organization. So that fight is something you kind of learn to embrace in bouncing back from negative experiences and using them, like I said, as a chip on your shoulder to continue to get better.

“Our group, man, I can honestly say at the end of the day that playing in the NBA is a very fun basketball experience and it’s been a huge learning experience. We’ve had ups and we’ve had downs, but it’s been great. And we’ve had guys who have gone through it together. And I feel like our organization is in a pretty good place.”