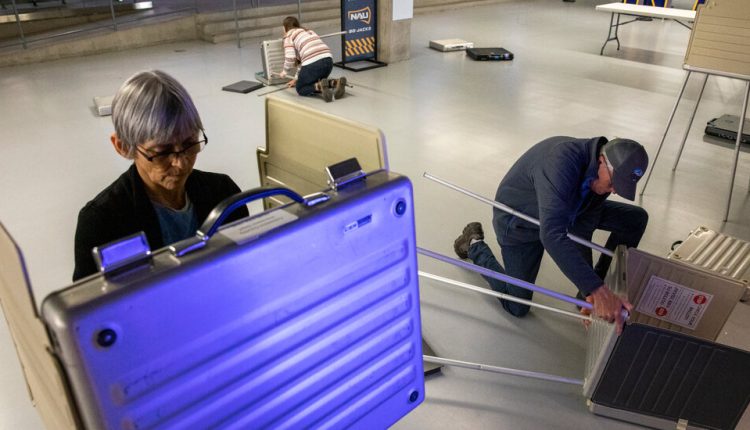 Candy on the Table, an Eye on the Exit: Poll Workers Run a Tense Election Day

Hours before voting began in this Northern Arizona college town, Nina Swidler went over some final notes for her team working on an election in the shadow of conspiracy theories and threats.

She told them: Arrive at 5 am on Tuesday. Don’t put your coffee cup near election materials, or let voters wander away with the pens. And report any security problems.

“If I can’t break it up, I call 911,” said Ms. Swidler, a retired archaeologist whose mother once hosted polling locations inside the family garage in Southern California, and who has worked on Election Days for nearly 30 years.

This Election Day, the brigades of retirees, grandparents and other civic-minded poll workers who hand out ballots and “I Voted” stickers now find themselves on the front lines of the country’s seething battle over election fraud and democracy itself.

While secretaries of state and county officials are responsible for overseeing elections, the actual work of welcoming voters, ushering them through the polls and making sure they follow the correct voting rules and protocols falls to thousands of poll workers, who tend to earn a couple of hundred dollars during a few frenetic shifts around Election Day.

These days, poll workers are also being briefed on de-escalation techniques and compassionate ways to defuse conflicts. They say they are trying to concentrate on their jobs amid growing scrutiny in the form of criminal investigations of poll workers in Texas, or potential fines of $25,000 in Florida if elections officials leave drop boxes unsupervised.

While volunteer polls set up in churches and schools across the state on Monday, officials in Phoenix held a news conference to rebut what they called a swell of new voting falsehoods. The sheriff of Maricopa County, which includes Phoenix, promised to jail anyone who disrupted voting and warned politicians against inciting violence.

The Justice Department added three counties in Arizona to a list of 64 cities and counties it is monitoring for potential violations of federal voting rights.

Brittany Montague, 36, who is part of the 18-person team at a voting center in Flagstaff, worked the 2020 elections and said she was not worried about her own safety. But death threats against election officials and reports of armed ballot-watchers are difficult to ignore.

“I definitely know where the exits are,” she said. “Now more than ever, we’re so polarized and there isn’t a lot of trust in the system.”

On Monday evening, the team gathered in a circle to take an oath vowing to defend the Constitution and Arizona’s laws. Then they got to work converting a concourse of Northern Arizona University’s Skydome — home of the Lumberjacks — into a voting center.

As a marching band down on the field rehearsed old “Blues Brothers” songs, the Election Day workers counted sealed packets of ballots and set up voting booths. They planned out where they would post signs outside, beneath a giant lumberjack statue.

Uncertainty rippled beneath the bustling energy.

“We are facing the greatest election crisis ever,” said Davidson Smith, 75, a first-time Election Day worker here in Flagstaff, who blamed Mr. Trump and his supporters for undermining trust in elections.

Ms. Swidler, the manager of the voting center, said there had been a tense moment during the 2020 presidential elections when she had to go outside and ask two rival political groups to stop yelling at each other while voters were waiting to enter the building. But she said she was optimistic that Tuesday would be calm.

“Most voters come in to vote,” she said. “They’re not there to agitate. They’re respectful and kind and thankful. I’m hoping for that.”

In Tucson, on the other end of the state in the south, Laverne Everett, a retired teacher who is leading an Election Day team, said part of her job was keeping the midterms’ sound and fury out of her polling place. She hoped that anyone who doubted the validity or integrity of the elections might think again after seeing the cheerful diligence of her poll workers.

“Like the news of fraud will spread, what we do will spread across the country and quietsome of this,” she said. “We follow the rules. We follow the guidelines. We keep the democratic process alive.”

In Flagstaff, Mary Ruetten, a teacher now attending graduate school at Northern Arizona, said she encourages people who spout conspiracy theories to volunteer as Election Day workers. She said the myths of widespread fraud would wither if people could see in person how every record was checked and double checked and every unused ballot was tracked.

“You will have a different point of view, and will probably feel pretty confident about the process,” she said.

Election rules in many states, including Arizona, require poll workers that represent both parties. Some of this year’s newest poll workers are Republicans who signed up because of their doubts about the validity of the last presidential election, but many poll workers were hesitant to share their party affiliations and discuss politics, saying they were focused on helping everyone eligible cast a ballot.

There has been no evidence of widespread fraud, and multiple independent reviews showed the election results were accurate.

“I still have questions about 2020,” said Andrea Guerrette. But after working a small local election and the primaries this year, her view of the midterms was different. “People are certainly trying to make sure it’s safe.”

Her husband, Galen, 77, a retired contractor, said he had faith in the election system. He hoped his work on Tuesday as a “marshal” who greets voters and keeps order inside the polling place would help quiet doubters.

“You want to keep it on the up and up so people can’t complain,” he said, paused a moment, and added: “I hope they don’t punch me out.”