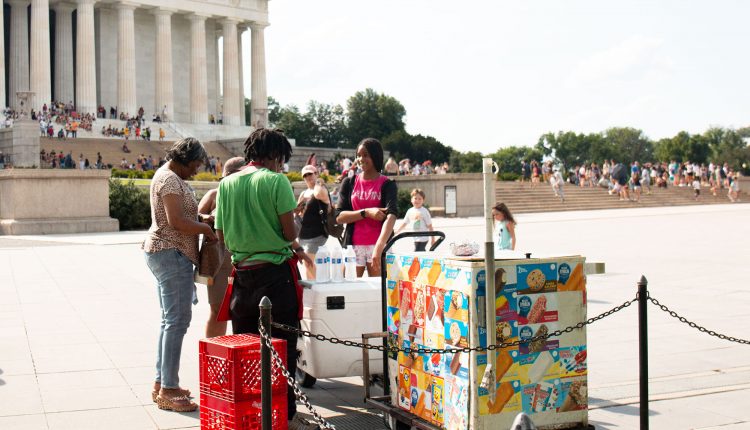 And in the heat of a Washington summer, there’s almost always the upbeat, repetitive chiming of an ice cream truck.

Whether it’s someone selling icy bottles of water out of a cooler in the summer, or peddling hats and T-shirts in the winter, when political movements come to Washington they are invariably trailed by a local army of vendors who capitalize on the protesters’ need for food, water and souvenirs.

Joseph Pileri, chief legal officer at Mission Driven Finance, said that like “iconic hotdog stands in New York … or halal carts or taco trucks in Los Angeles,” Washington has street vendors for the political crowds, and for tourists in general.

“D.C. is unique, right? It’s the center of so many protests and rallies,” Pileri said. “D.C. has a really long history of people taking advantage of large gatherings in places like Black Lives Matters Plaza and on the Mall in order to both make some money on the presence of all those people but (also) be able to support … whatever cause they happen to be in town for.”

Besides the fact that easing of COVID-19 restrictions meant a return of the regular tourist trade, this year has seen marchers protesting federal COVID-19 vaccination mandates and nurses demanding better working conditions. There was another March for Our Lives to protest another mass shooting, and both sides took to the streets as the Supreme Court considered a case that would lead it to overturn abortion rights.

Phoenix resident Eman Massoud was in Washington this summer for days of marching, protesting and lobbying in support of gun-control measures working through Congress. On a June morning, she stood on a patch of grass in the shadow of the Capitol, listening with hundreds of other activists to House Speaker Nancy Pelosi – as an ice cream truck plied its trade nearby.

“I’ve lobbied in Arizona, been in front of the state Capitol. I’ve marched out there,” said Massoud, who was in Washington for the first time. “But, I feel like this is just completely different. The environment is so inspiring.”

Inspiring, but Washington’s weather can also be overwhelming, as Massoud learned.

“Have good shoes. Because we’re walking around D.C. exploring after our rallies,” she said. “So, yeah, shoes, sunscreen and hydration.”

All of that is readily available from street vendors, who may have a truck, a cart, a table – or may just work out of a backpack or a cooler as they follow the crowds.

“These are savvy business people who are nimble enough to take advantage of the opportunity,” said Pileri, who has written several academic papers exploring the economics and history of street vending. “But they also help support the ability of people to be able to come and protest by providing them with things like food and water on hot days.”

There are 442 approved street vending locations spread across the city, according to data from the District government, but almost half are within a block of the National Mall and the White House, the scene of most protests and rallies.

Shawn Bartuti has been a D.C. street vendor for 25 years, the last three of which he has spent at the intersection of New York Avenue and 15th Street NW – right next to the White House.

“Sometimes it’s really good, though, when marches and things of that nature come around,” Bartuti said. “It’s good, man.”

Bartuti caters to tourists’ political whims: His cart offers Donald Trump flags and MAGA hats. Bartuti is a Republican, but that’s not the main reason his merchandise is heavy on the former president, but includes only a few items with Vice President Kamala Harris.

A 2018 report by the Department of Housing and Urban Development found the average street vending business in a large city can expect almost $26,000 in annual profits.

“Business is good,” said Allen Reed, who sells water bottles in front of the Lincoln Memorial. “College was just not for me. You’re making money at the end of the day.”

In Washington, the city requires permits for street vendors to set up shop. Vendors can apply for a license to operate in one of 76 permitted stationary roadway vending sites and 14 authorized vending locations at the various national parks.

But Pileri said getting a street-vending license is “onerous, and it’s complicated and it’s expensive.”

“The vast majority of folks who are street vending in DC don’t have licenses,” he said. “And as a result, people deal with police altercations – running from the police or being cited from time to time and having to pay tickets in order to avoid going to court. And that’s kind of built into their business costs.”

The cost of getting a two-year vendor’s license ranges from $337 to $447, according to the District’s vending handbook, and that’s on top of the site permit that costs $600 annually.

But those costs have not stopped Reed, who is licensed. He recently added a second cooler and his first employee and his prices are not regulated – the hotter it gets, the higher his “surge pricing” rises.

Lydia DeTello and a group of friends from Baltimore were outside the White House on a Sunday in July, carrying signs supporting the right to abortion. As residents of a nearby city, they are regular D.C. protesters who brought their own water this time. But DeTello said she appreciated the presence of a street vendor who was selling water bottles in Lafayette Square.

“It’s nice to know that the local people of D.C. are around and available, just selling water bottles,” she said. “That could be helpful because it’s a hot day, it’s July. Any little thing, including hydration, supports the movement.”

But for the vendors, it’s not the cause they are supporting as the cash it brings in. It is not unusual to see a vendor selling merchandise in support of an issue one day, and opposing it the next.

While business is good, Bartuti said his merchandise has landed him in hot water with a few tourists holding different viewpoints. He recalled that when Trump was in office, “they still had a dude down in front of the park, just all day long, just ‘f Trump.’ Constantly.”

But for him it’s part of the business. And part of America.

“I mean, that’s what America is all about,” he said. “Everyone should be able to have their freedom of speech, to believe in whatever political opponent that they want to believe in.”