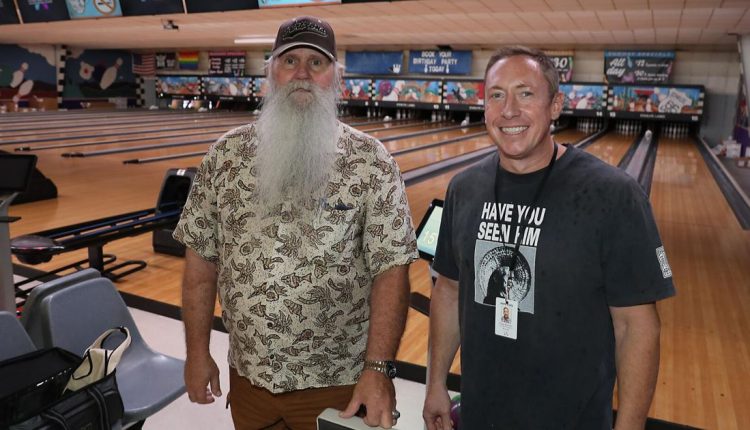 Bob Longest, a forensic peer support specialist at Hope Lives (Vive Esperanza) in east Flagstaff, went bowling with his friends on Friday to celebrate 37 years of sobriety. Beside him in bowling shoes was the forensic program manager, Troy Grover, who was celebrating four years of sobriety.

They owe the success in their journeys so far, at least in part, to the faces around them. Sitting behind scoreboards and the thunder of marble balls crashing into once-white pins is a community of people who know what life is like on the streets, behind bars and in the grip of addiction. They are the beating heart of Hope Lives.

“We’re a forensic peer support agency. All of our staff, we’re all felons and we’re all in recovery,” Grover said. “We use the word forensic because we all have justice system involvement. That’s what makes Hope Lives unique. We’re the only peer support agency that’s represented in the courts.”

Hope Lives, a nonprofit organization, opened in northern Arizona in 2014, and it has helped hundreds of people since then with serious mental illness (SMI) diagnoses, substance abuse disorders, and criminal histories to find support and resources to maintain their overall wellness. In doing so, the organization has partnered with the local superior and municipal courts, and works closely with the mental health court.

If you drop into the Fourth Street location in the morning, a line will probably be forming in a kitchen partially visible the moment you walk in the door. As people chat and roll breakfast burritos, they’re preparing to share more than a meal. They’re sharing a kind of struggle most people won’t encounter.

One woman, a survivor of suicide, openly shared her story in a chirping voice, a smile as bright as the flowers on her shirt lighting up her round face. To her left sat a lady with gray hair and a tie-dye shirt who just started the recovery process and a young man who has just finished treatment at the Guidance Center.

All of the program members at Hope Lives have been referred from behavioral health homes, including Southwest Behavioral and Health Services, The Guidance Center and the Northern Arizona Center for Addiction (NACA).

When Grover asked who in the room had been homeless, more than half of the hands responded.

“I had hypothermia,” said Mark Rudy. “I almost died on the streets. I come here to Hope Lives to stay sober. It’s a safe place. I never want to be on the streets again.”

The staff at the center provide transportation for people like Rudy — in addition to breakfast, counseling and daytime activities.

“[Hope Lives] showed me the process of community involvement,” said Marvin Chee, a peer support specialist. “I went to prison. I came out better.”

Chee said the experience of re-integrating into society was isolating after its release. Now he does jail in reach (one of the programs that has grown and deepened in recent years), talking with people who are incarcerated about the support they can find at Hope Lives both in detention and upon release. He also coordinates with public defenders and probation.

“There’s a shadow that follows you when you’ve been rejected by the community,” he said.

Hope Lives helped him regain the confidence to talk to cashiers at grocery stores and begin to feel like a participant in society again.

“There’s no grocery store for felons. Just breaking through the stigma of all of that?” Grover said. “Our ultimate goal is just societal inclusion for our members who have a mental health diagnosis, who have substance use history, who have been incarcerated or have a history with the justice system Because what happens is we get locked up, we have a substance-use disorder. Some people just never get out of it because we don’t know how.”

That’s where having a guide to help you through the process can be critical.

Chee described recovery from addiction as a silent struggle. At Hope Lives, everyone is encouraged to use their voice, and share their experience with others.

The nonprofit provides peer support certification for the state. The certification program is 16 weeks long, beginning with six weeks of “basic training” and ending with specialty workshops and a monthlong internship.

Grover said new peer support specialists upon graduation are “thrown into the deep end” and allowed immediately to start working with folks who need one-on-one or group support with their addiction or mental illnesses.

The process is all about empowering people to share their struggles, experiences and successes.

Shauna Ben is a graduate of the peer support program, but she comes back from time to time.

On the morning of Grover and Longest’s shared sobriety date, she helped make breakfast. She talked about the support she received from fellow members who helped her move in to her new home. Beyond that, she was able to cultivate a new career with Hope Lives support.

“They have helped me utilize and gain the tools to become a behavioral health professional. I’m now employed full time in behavioral health, and helping to support others in long term recovery,” Ben said.

Not everyone celebrates sobriety at the bowling alley, but over the years since the nonprofit opened, they’ve served 310 people like Ben, Longest and Grover — with the goal of helping every member leave feeling like a part of a community with success to share .