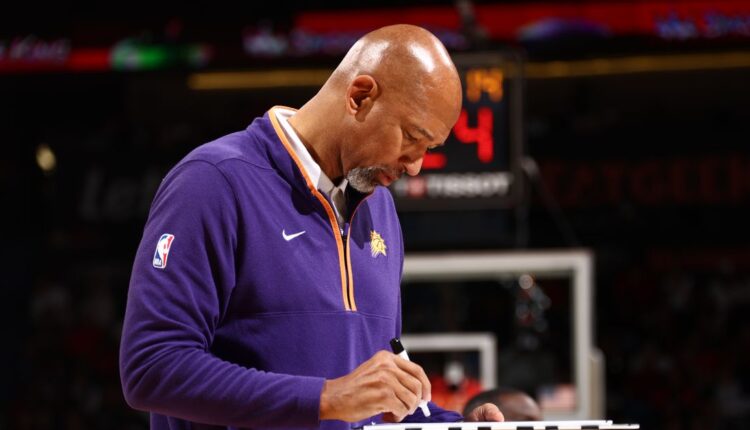 Center of the Sun: Phoenix Suns shouldn’t panic, but they shouldn’t be calm either

Welcome to the weekly news roundup of your Phoenix Suns.

One week you’re sitting on top of the world. The next you’re looking inward as that world crumbles around you. As Frank Sinatra would say, “That’s life.”

Week 8 has brought us a different story. They were blasted by the Boston Celtics on national television. They traveled to New Orleans and learned that opposing teams hold grudges, losing at the hands of the Pelicans much to the enjoyment of those at the Smoothie King Center. They went 0-3.

The team limps out of the week, losing their Western Conference player of the Month in Devin Booker to a hamstring injury, finding themselves dropping in the standings to fourth in the Western Conference, and putting up numbers that we haven’t seen since pre-Covid.

Suns have lost four regular season games in a row for the first time since March 2020, three Suns games before the world stopped.

It’s a reminder (not that many Suns fans need to be reminded) that winning in the NBA is hard. While we shouldn’t panic – we’re only 1/3 of the way through the season – we should be concerned. The schedule isn’t easy and teams are gunning for the Suns. That’s what happens when you represent the west in the NBA Finals one year and win 64 for the next. You hurt a lot of feelings along the way. Those teams want revenge.

The Suns shouldn’t panic, but they should be concerned. If they want to right the ship and start winning games once again, here are three observations that will benefit this mission statement.

This was a similar opportunity for last year‘s team. If you can’t get to the free-throw line, especially come playoff time, you can’t control the pace of the game. You can’t put the opposition in foul trouble and force them to make adjustments that they are not ready to make. You can’t get easy points when every point in the postseason is challenging.

The Phoenix Suns simply don’t get to the line.

The Suns average 20.3 free three attempts per game. That is 50th best in franchise history.

The fact remains that this team does not put themselves in a position to be at the line. An adjustment needs to be made.

Devin Booker is going to be out for an unknown amount of time. He has a history of hamstring injuries and, seeing as it is early in the season, there’s no need to rush him back. In his absence, 27.4 points a night are being vacated, as are his 20.5 field goal attempts.

An adjustment needs to be made here as well. You have to feed Deandre Ayton.

You have to replace Booker’s production, why not do so with your most efficient player? He needs to be a central part of this offense. I’m sure that’s easier said than done, asking the Suns to change their offensive philosophy from being guard centric to inside out type of basketball, but the adjustment is a must.

The time has come for James Jones to make a transaction. The team is injured, the depth is depleted, and they have a player who earns $10.1M not even present. That must change.

The depth has been tested, and unfortunately, it is failing. Multiple times during this losing streak we’ve seen an opposing player come off the bench and light up our second team unit. Josh Green. Jose Alvarado. The Suns don’t have any fire power to match it.

Cameron Payne has made the move back to the second team unit, but he is inefficient in his scoring, shooting 39.4% since his return to the bench, and 25% from deep. Landry Shamet, although he led the team in Week 8 with a +27, does not appear to be the answer either.

The December 15 deadline is this week. The majority of the league is eligible for trade at that time. James Jones, we need you to go get that piece.

It’s time to pull the trigger. This team has played well without Jae Crowder, sure, but the absence is starting to hurt the team. We’ve made it to Week 9. TIme to follow through with shipping Jae out of town.

Player of the Week

There wasn’t a long list of stellar performances this week. The Suns were 0-3, but we saw flashes of DA dominance as he went to town on the interiors of the opposition. Ask anyone who supports the Pelicans who the most challenging Sun was and they’d tell you, it was Ayton.

Fade Away World: 3 Players The Phoenix Suns Could Trade This Season

Burn City Sports: The Chris Paul and Jose Alvarado Rivalry Is Heating Up

The Athletic: Chris Paul unpacks his 11,075 assists: Can he name the 10 players he’s assisted most?

Quotes of the Week

“Feels like that game should count for two losses.” — Devin Booker on the Celtics loss

“We got beat in every area of the game tonight.” — Monty Williams on the Celtics loss

“That stuff doesn’t bother me at all. It’s part of basketball. It wasn’t that big of a deal. It was a bunch of guys out there yelling and screaming and not even pushing.” — Monty Williams on Zion’s last second dunk on Friday

“It’s a homecourt. He’s doing it for his fans. I don’t take any of that stuff personal.” — Deandre Ayton on Zion dunk

‘I’m happy for her.” — Torrey Craig on Brittney Griner

“We need to get a win.” — Monty Williams

The ratio of Suns’ games to occurrences in which the team free throw disparity has been 20+. It’s happened four times this season:

For perspective, a 20+ free throw disparity has occurred 13 total times this season. No other team has had it occur more than once.

Cameron Johnson (right meniscus) is NO TIME TABLE FOR RETURN

Jae Crowder (salsa dancing in Miami) is NOT WITH TEAM

This Week in Suns History

In the preseason, the team scored 183 points against the Denver Nuggets. A few weeks later, they smashed that same Denver team by scoring 173, winning by 30.

On December 15, they punched Denver right in the Nuggets again, winning 142-134. People in the Mile High Center must’ve felt helpless when they saw the purple and orange.

Remember that? Getting to the line? That team averaged 32.7 free-three attempts a game, 6th highest in team history.

First on the docket next week is the Rockets, a team that beat Phoenix 122-121 on December 2 and started this downward spiral we’ve been in for 10 days. They’re young, they run, and that can be a challenge for the Suns.

Jalen Green had 30 points against the Suns, going mano a mano with Booker. There is much doubt that Booker will play in this one.

Devin Booker is officially out with a (Hamstring). Again I don’t expect him to play in Houston either and that’s totally fine. It’s a Marathon not a sprint

Following that it is the Suns’ second matchup against the Clippers. The 15-13 Clips are beginning to see what life is like with Kawhi Leonard, Paul George, and John Wall. They too are a team that, well, doesn’t like the Suns.

It’s a late game on NBATV and the final stop on the road trip for the Suns. It’s gotta be tough flying from Houston to LA, going right over Phoenix.

Lastly, it’s the final regular season matchup between the Pelicans.

We saw that team this past weekend. Young. Confident. Brash. And looking to beat the Suns. They’re not happy that Phoenix ended their season early last year, and they’re making it known that they are out for vengeance. They’re doing 360 dunks at the end of games. They’re screaming to their fans that this is their house.

They come to Phoenix next weekend and it’s our opportunity to at least trip them up a little bit.

While I’m concerned, I still have hope. Maybe it’s the Christmas season. Goodwill towards men and all that crap.

If officials allowed the Suns to be physical, they might stand a chance. That’s if they wanted to be physical. What do you think?

What will the Suns Week 9 record be?

Stop and think exactly where the Suns are at. A crossroads. We are living at a moment in time in which the season can go one of three ways. They can persevere and progress. They can hold on an keep the ship afloat. Or they can sink. Any of the three are possible at this point in the season.

They are still 16-11, even after a 4-game losing streak. They lack one thing that you typically know when you are one-third of the way through the season. An identity. Last season they personified a team that was elite in the clutch. This season, there only true identity is one of a team that is constantly filling the injured list with names.

These next few weeks are vital to the outcome of this season. Create an identity. Define who you are. And win some games while you’re at it.

About Yuma | City Of Yuma, AZ