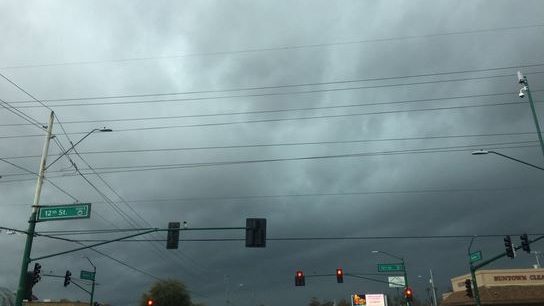 Chance of light rain in Phoenix on Tuesday, followed by higher than normal temperatures

The National Weather Service in Phoenix forecast the system has a 10% chance of measuring 0.10 inches or more because rainfall levels will be very light.

After Tuesday’s light showers, there will be dry conditions with temperatures slightly above normal, NWS said.

A weak weather system moving over the area on Tuesday may deliver some splashes/light showers. Otherwise, drought and slightly above-average temperatures are to be expected by the end of the week. #azwx #cawx pic.twitter.com/KubxCfgNC5

Tuesday’s high is expected to hit 68 degrees, followed by a high of 70 degrees on Wednesday and 73 degrees on Thursday.

The last time Phoenix saw rain was on New Year’s Eve, when areas in the East Valley saw up to 0.59 inches of rain and other parts saw 0.2 inches.

Parts of Flagstaff are expected to experience light rain and snow showers on Tuesday, NWS said.

North AZ expects mainly fine weather this week, but a weak storm system off the California coast will give us a chance of light showers on Tuesday. Not much, but the way January went, we’ll take what we can get. #azwx pic.twitter.com/wWdwG7UlaY