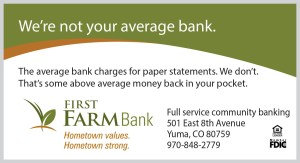 The charity flick has not previously been charitable for the Yuma High School girls’ basketball team.
The Indians played well early in the season, going 5-3, including splitting two home games last weekend, but there was a glaring discrepancy at the free-throw line in their three losses.

“I can’t figure it out, to be honest,” said head coach Jeremy Robinson. “In the games we lost, the free throws were crooked.”
After returning from the Christmas break with a narrow 41-38 win over the Haxtun Fightin’ Bulldogs, they suffered a tough 48-41 loss to No. Holyoke in last Friday’s Lower Platte Activities Association opener.
Yuma is still in good shape, ranked 8th in the Top 10 Class 2A and 12th in the Rating Percentage Index. The Indians travel to Akron for a league game on Friday and then host Burlington in a non-league game on Saturday afternoon.
Akron played hard against Wray in both teams’ LPAA openers last Friday, eventually falling by 12. The Rams have lost back-to-back and are 4-3 on aggregate and 0-1 in league play. Wray came off the break with two wins , after losing his last four in December, and evened his record at 4-4, 1-0 in LPAA action.

Burlington has struggled with just one win so far this season, but Robinson said the Cougars have been close against some good teams and have plenty of talent to give Yuma fits.
Hopefully at least the number of fouls will be balanced.
Holyoke shot 30 free throws and made 16 in last Saturday’s game at The Pit, while Yuma shot just four and made one. It was the same story with the tribe’s other losses to Wray and Eaton. In those three losses, the opposition has made a combined 51 of 91 at the Charity Stripe while the Indians have made 14 of 23.
“Either we need to be more aggressive offensively or commit fewer fouls on defense or maybe a combination of the two,” Robinson said. “Something has to change.”
What doesn’t have to change is the performance of the Indians, who came out of the Christmas break with two other strong performances.
It all started last Friday against Haxtun in the league opener for both of them.
The teams battled to a 20-20 draw in the first half and were back up to 32 points after three quarters.
A quick riot in the fourth tipped the game in Yuma’s favor. Emma Rayl hit a 3-pointer, then Lyndsey Mekelburg stole the inbound pass and hit Ashley Ibanez for the layup and a 37-32 lead.
That was all the Indians needed to stop Haxtun for the 41-38 win.

“The cool thing about these girls is that they’re brave and they hang around,” said Robinson. “They just keep fighting.”
The Indians won despite cold shooting, finishing 22 percent from the floor. They got to the line that game, shot 16 free throws but only made seven. They also committed 22 turnovers but threw down 33 rebounds, including 18 on the offensive boards.
Meidi Reyes had 11 points and two rebounds, Rayl eight points and two rebounds, Lea Richardson six points and seven rebounds, Caddis Robinson six points and four rebounds, Ibanez four points and 10 rebounds, L. Mekelburg two points, Alina Moran two points, Jade Lungwitz two points, Sam Wells four rebounds and Jailyn Mekelburg three rebounds.
Holyoke rolled into town on Saturday afternoon, ranked 5th on the top 10 and 2nd on the RPI.
However, the Indians gave the visitors all they could handle before Holyoke could pull away just enough.
Yuma took a 17-16 lead midway through the second quarter when Liddy Days showed 3-pointers. Holyoke then scored four goals in a row, but the Indians kept fighting and the teams were tied 21 at halftime.
As the night before, the game turned quickly in the second half, but this time only in Holyoke’s favour. Reyes hit a trey to give Yuma a 31-30 lead late in the third, but Holyoke’s Vieselmeyer hit six in a row giving the Dragons a 36-30 advantage going into the fourth.
Yuma kept hanging around but never got any closer than four on the track.
“We had our chances, but we’re just not going to win 30-4 on free throws,” Robinson said. “…Losing at seven and getting shot so badly on the free throw line, that’s tough.”
Yuma shot better at 36 percent but still missed too many from close range. The Indians damaged their cause by committing 32 turnovers.
Robinson made three from behind the 3-point arc and finished with 11 points and eight rebounds, Richardson had eight points and five rebounds, Rayl seven points and five rebounds, Reyes seven points, Tag three points and two rebounds, Ibanez two points and three Rebounds , Moran two points and four rebounds and Wells one point.
“Like I told the girls, the morale victories are over,” Robinson said. “We are a good team. We just have to take that extra little step over the edge. It will all work out and come together.”