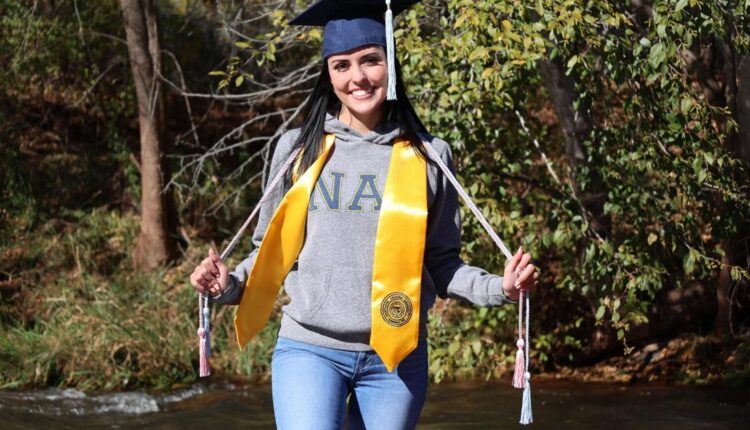 It wasn’t until Northern Arizona University graduate Chloee Verville chose her major that she found her motivation to succeed. Now that she has, she’s been doing everything she can to excel.

Verville, who will be graduating from NAU in today’s commencement, declared an elementary education major in her junior year. She returned to the university after struggling her freshman year and has been studying and student teaching since with the hope of one day becoming a kindergarten teacher.

While she had spent eight years working as a nanny before starting college, Verville said she hadn’t thought much about working with kids until it came time to choose an area of ​​study.


She said she was “all over the place” in school before settling into elementary education, changing her major about five times and dropping out of the university her freshman year. She went back home to Phoenix, taking general education courses at a community college before reapplying to NAU.

“I just had no idea what I wanted to do,” she said of her start to college. “… It took me flunking out my freshman year at NAU, getting kicked out of the program entirely to get my act together and really focus on what I wanted to do — to learn and go to school and excel in the areas that I was good at.”

She had to write a letter to be re-accepted to the university and has been working hard ever since, earning a 4.0 GPA every semester (raising her overall GPA from a 1.5 to a 3.5), a spot on the dean’s list and multiple honors society placements.

The experience “definitely changed my way of thinking,” she said. “I readjusted where my motivation was and I was able to fix that from then on.”

The lack of motivation was mostly due to taking a lot of different classes as part of the exploratory program, she said — on topics such as construction management, criminology and fine arts that Verville knew she wasn’t likely to use going forward.

After figuring out her path forward, she said, “my mentality changed.”

She decided to reapply to NAU because of its familiarity and its “stellar” education program and ended up getting a full-ride scholarship through the Arizona Teacher’s Academy.

Over the past year, she has moved into student teaching in addition to her own studies, most recently in a kindergarten class in the Flagstaff Unified School District.

The thing she said she’ll miss most about her time in college is making new friendships with people in her classes, especially the education program.

“In the end, it was the best experience I have ever had,” she said of adding student teaching to her studies. “I learned so much, I just took the time and built relationships where and when I could. I made amazing friends along the way with my team and the school that I had worked at. … I [wanted] to be the best teacher and learner as much as I could during that time.”

Going from being a nanny to three kids to teaching a classroom of 20 was a learning experience, she said, teaching her time management and ways to balance one-on-one relationships with the needs of a larger group.

Teaching different grades also started her interest in working with younger learners, specifically kindergarten and first grade. This was confirmed by her recent longer experience in a kindergarten.

“It’s easy to make learning fun for them because they are so little and they just love learning. They have a passion for learning new things, they’re always motivated to learn more. The questions that they ask always relate to the content that we’re learning and they just want to grow their brains.”

Elementary education major Chloee Verville will be graduating from NAU at the fall 2022 commencement.


In January, Verville plans to return to the same school as a resident substitute, which will mean continued learning as she enters new classrooms throughout the school each day. For the next school year, she hopes to find work as a kindergarten or first-grade teacher in the Gilbert Unified School District.

“I’m very eager and excited to learn new things” in her coming position, she said.

Verville’s advice for students entering NAU was based on their own experience of starting college.

“Don’t be unmotivated to try things and explore your options when you get to NAU,” she said. “I had a set mindset on what I wanted to do and immediately — my first day — that changed. Don’t be scared to try new things.”