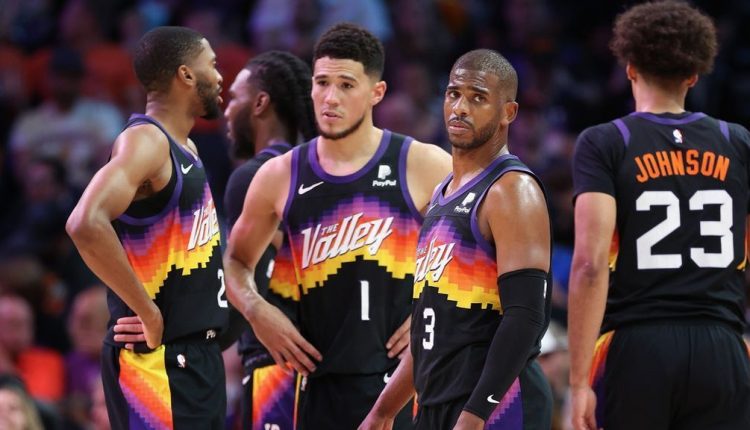 PHOENIX — For the second straight year, Suns point guard Chris Paul’s season came to an end with his team failing to protect a 2-0 series lead en route to a disappointing NBA playoffs exit.

And for the second straight year, Paul felt compelled to announce he has no plans to walk away from the game in the immediate aftermath of that devastation.

“You play long enough and you don’t win, every time you lose, they’re going to say it was your best chance,” said Paul after the Suns’ 123-90 loss to the Dallas Mavericks in Game 7 of the Western Conference semifinals Sunday. “But I think for me, us, it’s we’ll be right back next year. I’ll tell you that much.

The way the series went mirrored Paul’s play for the Suns. He averaged 23.5 points and just two turnovers in the first two games — including a masterful 14-point fourth quarterer in Game 2 — and Phoenix took a 2-0 lead. But in the last five games, all of which came after his 37th birthday on May 6, he averaged 9.4 points and 3.6 turnovers. Phoenix lost four out of five, collapsing in a similar fashion to its NBA finals loss to the Milwaukee Bucks when two wins were followed by four losses.

Paul was ineffective on Sunday, finishing with 10 points and four assists, but not scoring his first field goal until the Suns were already down by 40 points in the third quarter. He literally limped to the finish line, playing through a left quad issue that limited his mobility, sources told ESPN.

While Suns coach Monty Williams, who was named the NBA Coach of the Year earlier this week for guiding Phoenix to a franchise record 64 wins in the regular season and the No. 1 overall seed in the playoffs, took the blame for the loss, Paul wouldn’t accept that.

“I think we just came out and just didn’t have enough,” said Paul after the Suns’ 30-point halftime deficit represented the largest halftime margin in Game 7 history, according to ESPN Stats & Information research. “I think Mont said that’s on him, but I think that’s on me, as the point guard, the leader of the team. To come out and make sure you’re getting the right shots and all that.”

Mavs star Luka Doncic single-handedly kept pace with the Suns, scoring 27 points of his own in the first half to match Phoenix’s 27 as a team. Dallas was up 57-27 at the break and pushed its lead to as many as 46 points in the fourth quarter — the widest margin in a Game 7 in the past 25 years, according to data compiled by ESPN Stats & Information.

While Paul finished with the worst plus-minus of his 17-year career between the regular season and playoffs combined — the Suns were outscored by 39 in the 31 minutes he played — it wasn’t like his teammates did much better. Devin Booker, who was Phoenix’s other All-Star this season besides Paul, scored 11 points on 3-for-14 shooting, far below his 26.5 points per game average over the past two postseasons coming into Sunday.

“They did a good job of getting the ball out of my hands and trapping every action I was in,” Booker said.

Sun’s big man Deandre Ayton finished with just five points and four rebounds. He was pulled with 8:26 remaining in the third quarter and did not get back in the game after exchanging words with Williams on the bench.

“It’s internal,” Williams said, tersely, when asked to explain why Ayton played only 17 minutes, the third-fewest minutes the former No. 1 pick played in any game in his career.

Mavericks coach Jason Kidd said the enormousity of the moment in the win-or-go-home game might have gotten to the Suns.

“You could see some of the pressure was probably on them early,” Kidd said, “because they missed some shots they normally make.”

“We basically played our worst game of the season tonight,” Williams said. “I talked to them about all year long we’ve been hearing all the praises, winning all the games and setting records and all that stuff. We’ve been taking it. Well, tonight you’ve got to take it [too]. That’s a part of manhood.”

Phoenix joined the 2006-07 Dallas Mavericks and 2015-16 San Antonio Spurs as the third team in league history to win at least 64 games in the regular season and fail to advance to at least the conference finals. The 60 combined points the Suns lost Games 6 and 7 by represented the second-largest score difference over Games 6 and 7 of a playoff series, going all the way back to 1962 when the Warriors beat the St. Louis Bombers by 62 over the final two games, per ESPN Stats & Information research.

“It was a good, old-fashioned ass whooping,” Booker said. “Beginning to end.”

As brilliant as Doncic and the Mavs looked Sunday, the Suns were a dominant group all season — the only team to rank in the top five both offensively and defensively — until they weren’t. They went from owners of a first-place record to authors of one of the worst performances in NBA postseason history in a matter of 48 minutes.

“Right now, everything is such a blur,” Paul said. “The season just ended. It’s all abrupt.”