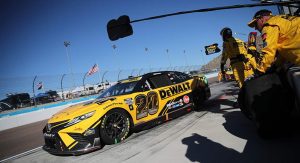 AVONDALE, Ariz. – Christopher Bell’s first Championship 4 appearance hinged on a pair of late-race pit stops, one that put him within reach of eventual champion Joey Logano and another soon after that hampered his championship ambitions. But Bell’s first title shot came with a deep sense of perspective after the death of team co-owner Coy Gibbs overnight before Sunday’s season finale.

Bell finished 10th in the last race of the NASCAR Cup Series season, placing third among the title contenders – behind eventual champion and race winner Joey Logano, third-place Ross Chastain, but ahead of Chase Elliott (28th) – at Phoenix Raceway.

“Good work, everybody. It wasn’t meant to be,” crew chief Adam Stevens said over the No. 20 radio on the cool-down lap. “We fought our guts out, as expected.”

But the race aside, Bell had much more weighing on him.

“About the same as what it was through the whole playoff, the last handful of weeks. You wake up first thing this morning and super excited and thrilled with life and where you’re at and the opportunity given to you. To receive news like that a couple hours before you get in the car is extremely tough,” Bell said. “Just really kind of puts it in perspective that what we’re doing here is not the big picture for sure. Yeah, just thinking of Joe. I just can’t imagine what Joe is going through and the entire Gibbs family. That’s the important piece.”

Bell started 17th – also third among the final four – and made gradual progress early on. He recovered from a Stage 2 bobble off Turn 4, a jammed-up restart, and then kept forging ahead in the top 10 during the final stage after what he perceived as a loss of power – what he called a “weird sensation” that soon righted itself.

Stevens called Bell in for a green-flag pit stop on Lap 249 of 312, two laps earlier than Logano. The ground he made up on fresher tires put him in close range of Logano’s No. 22 Team Penske Ford.

But a stop just during the final caution period – for Alex Bowman’s Lap 267 crash with Michael McDowell – proved pivotal. Jack man Caleb Dirks caught his finger between the wheel nut and the spindle during the four-tire change, costing the No. 20 over-the-wall crew precious time and lining Bell up 15th for the final restart. He made up five positions in the 33-lap dash to the checkered flag.

“It just wasn’t our day, you know. Honestly, it really wasn’t our weekend,” Stevens told NASCAR.com. “We didn’t unload that great, and that’s on me, on us and struggled to make it much better. Through practice, I think we made a dent in it for qualifying and the race, we just kind of overdid it for qualifying and tried to come back a little bit, and we seem to have decent long-run speed, and short-run speed suffered a little, but long runs seemed like we were as good as anyone. …

The outcome marked a bittersweet end to Bell’s highest points finish yet in the Cup Series, capping a deep playoff run marked by clutch moments when he and the team staved off elimination twice.

A bid for another encore came up just short at Phoenix.

“Yeah, I think the season was successful. To get to the final four is what every driver in NASCAR’s goals are. I’m very proud of that effort,” Bell said. “With 40 or 50 to go, the last green-flag pit stop, we put ourselves in position to race for it. You can’t ask for much more than that. Looking towards next year, I think we have potential to be stronger yet, and certainly we have room to improve at Phoenix. Yeah, I’m very content with where we ended the season and proud of the effort on this 20 car. I’m excited about the future with Joe Gibbs Racing.”