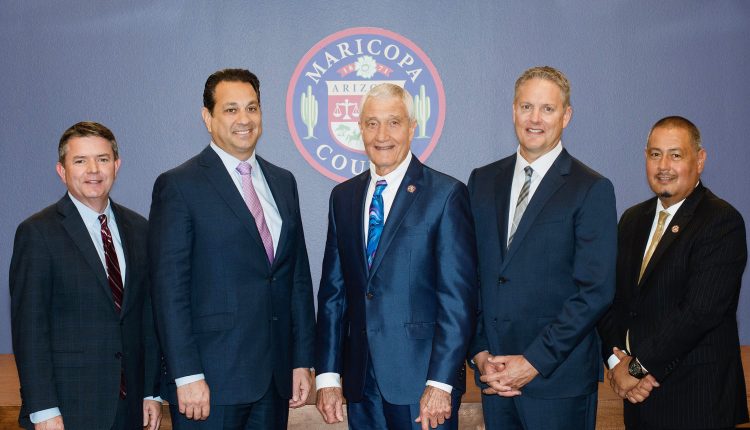 Before the Senate began it’s so-called audit, Maricopa County Supervisor Steve Chucri criticized his colleagues on the Board of Supervisors for not supporting the Senate’s review of the 2020 election, speculating that two of them were worried about what such a review would show about their own narrow victories in November in a newly released recording.

In the conversation with conservative activists, which they recorded in January and March and provided to right-wing media this week, Chucri also made an outlandish claim that dead people voted in the November election, and alleged problems with illegal ballot harvesting and a law that Gov. Doug Ducey signed last year that allowed election workers to analyze digital images of ballots in cases where it was unclear which candidate a voter chose.

Maricopa County was the driving force behind that law, and it was supported by Chucri and the other county supervisors.

The comments were made during a meeting in March with Shelby Busch and Steve Robinson of the conservative group We the People AZ Alliance, which, at the time, was attempting to force recall elections against all five members of the Board of Supervisors, including Chucri. The group did not collect enough signatures to force recall elections against any of the supervisors.

Gateway Pundit, a far-right conspiracy theory website that has promoted countless false claims and conspiracy theories about fraud in the 2020 election, first published several recordings of the conversation.

In one recording, Chucri laments that fellow Republicans Bill Gates and Jack Sellers, the board’s vice chairman and chairman, respectively, didn’t support the upcoming Senate review of Maricopa County’s election results. He said he’d personally told Senate President Karen Fann, who ordered the self-styled audit, that they would agree with him in supporting the election review.

And Chucri said he believed their opposition stemmed from concerns about what the audit would show.

“You know what I think it was, in hindsight? Gates got scared because he barely won, and Jack got scared because he only won by 200 votes. And if there was an audit and a recount — which is pretty bullshit, by the way — what would happen in those two races? And that is way too self-serving,” Chucri said.

Chucri’s comment appears to cast doubts on the county’s post-election hand count of a limited number of ballots that was required by law — 2% of ballots cast at polling places, and 1% of mail-in ballots — which matched perfectly with the county’s official tally, and of an audit the supervisors ordered of the county’s ballot tabulation machines. That audit of the machines, commissioned in response to baseless conspiracy theories that machine vendor Dominion Voting Systems manipulated the results, showed no problems. At the time, Chucri lauded the results and said they should instill public confidence in the county’s election systems.

In a different recording from the same conversation, Chucri alleged that Republican Supervisor Clint Hickman wanted to discuss the possibility of an audit late last year, but “he just didn’t have the guts to do it.”

Chucri also made a baseless claim about dead people’s ballots being cast in the election.

“I think it was done through dead people voting. I think it was multifaceted. I think there’s a lot of cleanup here,” he told Busch in a Jan. 22 phone call, which Gateway Pundit posted on Tuesday..

There is no evidence that the votes of dead voters affected the outcome of the election. The Arizona Attorney General’s Office secured an indictment in May against a Republican woman from Scottsdale for allegedly casting her dead mother’s early ballot, which may be the first such prosecution in the state’s history.

Chucri’s criticism wasn’t limited to his fellow supervisors. At one point, he said he was proud to have helped “take out” Adrian Fontes, the Democratic county recorder who lost his re-election last year, opining, “That guy’s a scumbag.” Fontes and the board clashed several times, and the supervisors stripped him of some of his powers over elections after problems during the 2018 vote.

The recordings are largely at odds with Chucri’s public comments since the 2020 election. Chucri was initially supportive of any audit, and was the only member of the Board of Supervisors who opposed going to court to fight Fann’s subpoenas for ballots, tabulation machines and other election materials she wanted for her review.

But Chucri has since been critical of the Senate’s “audit,” which has been plagued by problems and controversies, and was conducted by contractors who had no qualifications for elections-related work and who had openly promoted false claims that the 2020 election was rigged against former President Donald Trump. In May, he joined his colleagues in condemning the review, saying, “There was doubt cast, so I supported the audit. What I didn’t support was a mockery, and that’s what this has become.”

According to Gateway Pundit, the recording was made on March 22, a little more than a week before Fann announced that she’d hired the Florida firm Cyber Ninjas to conduct the upcoming “audit,” which began several weeks later.

Chucri also said he regretted not pushing for a larger hand count of ballots after the election. State law permits counties to count up to 5% of ballots; the county counted 2%.

In a written statement his office provided to the Arizona Mirror, Chucri said he was referencing his support for an audit conducted by an accredited firm, but that he does not support the Senate’s current audit, noting that he previously called it a mockery.

And he apologized for his comments about Gates, Sellers and Fontes.

“I should not have done so and offer them my heartfelt apologies and know them to be men of highest integrity and ethics. They have every right to be both angry and disappointed with me. Further, to my colleagues Supervisors Hickman and Gallardo, I am sorry this may bring tension toward representing the best of Maricopa County. I also want to apologize to former Recorder Fontes for using an unflattering term about him,” Chucri said.

Chucri added that he stands behind the audit that the county commissioned of its ballot tabulation machines earlier in the year, and supports the election workers who “have worked tirelessly to conduct secure elections for Maricopa County voters.”

Chucri’s office did not respond to a follow-up request for a response to his comments about dead voters and about Hickman.

Sellers said he was surprised by Chucri’s comments. He said he hadn’t heard Chucri express any concerns about the post-election hand count or the audit of the tabulation machines.

“Certainly Bill Gates and I were not concerned about a recount at any time. When the election’s over, it’s over. And a recount wasn’t going to change the results. So it’s silly to say either one of us was ever concerned about it. But I really don’t know where that came from or why,” Sellers told the Mirror.

Fontes was blunter in his response to Chucri’s comments about him.

“I won’t apologize for thinking the same about him, and he can go to hell,” Fontes said.

Gates and Hickman could not be reached for comment.