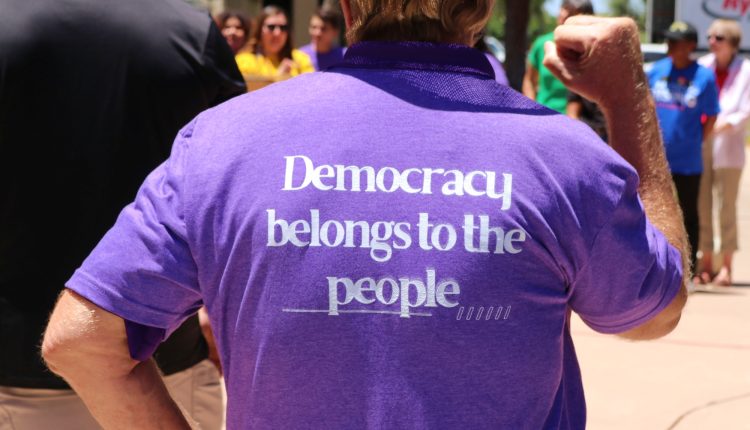 Citizen initiatives are under attack in Arizona

Arizonans are already going to the polls to vote on a series of pressing issues confronting the state. But as is the case in many places, partisan conflict is center stage. Media outlets everywhere are handicapping the chances of Republicans and Democrats controlling this or that lever of power.

And while the heat around this contest for power has only grown more intense, it is hard to argue that never-ending partisan competition has delivered particularly good results for Arizona’s citizens, regardless of which party is in power. But Arizonans have always had a simple way to legislate while avoiding the heat of partisan competition: citizen initiatives, a right which is now under direct attack by the state’s elected officials.

As partisan competition has become increasingly zero-sum, candidates are relying on partisan identification and polarization to get elected rather than legislative accomplishment. One consequence is that legislation has become increasingly fraught and distant from the priorities that majorities of Arizona voters share. In this hyper-partisan context, ballot initiatives have only become more important for legislating on majoritarian priorities.

But rather than take their cue from voters who are mobilizing in support of their citizen initiatives — something we might expect of representatives that were interested in actually representing their constituents — Arizona’s elected leaders are attempting to shut down this avenue of citizen voice. What we are seeing in this case is not a conflict between Democrats and Republicans, but between elected officials and their constituents.

Because extremism is often fueled by feelings of disempowerment, denying Arizona voters their say through citizen initiatives will likely only destabilize Arizona politics further.

The current round of attacks on citizen initiatives is ironically coming via ballot proposals that were put there by the Republican-controlled state legislature. Arizona citizens will have their say on each of these.

Proposition 128 would amend the state constitution to allow the legislature to take a variety of actions to ignore a citizen initiative if any part of it is found unconstitutional by the Arizona State Supreme Court or the U.S. Supreme Court. Of course, any law is invalidated if it is found to be unconstitutional. The only purpose of this initiative is to allow the legislature to amend it, a change which is very likely to be abused.

Proposition 129 would amend the state constitution to limit ballot initiatives to a single issue, articulated in the title of the initiative. The effect here is merely to increase the burden on citizens who want to give citizens the opportunity to vote on issues that the legislature won’t address. Each one would have to be qualified individually, doubling the work required for each “issue,” even if they are related.

This proposition would make it impossible for Arizona citizens to pass something like the South Dakota anti-corruption ballot initiative which was predictably, vehemently, and unsuccessfully resisted by that state’s legislators.

Finally, Proposition 132 requires a supermajority of 60% for initiatives that would require taxation. This is an overtly oligarchical proposal that is a clear case of a legislature attempting to defend its authority against the citizens it is supposed to represent. It is also the natural capstone to legislative efforts to undermine previous citizens initiatives that the heavily-partisan (and gerrymandered) legislature doesn’t like.

But this effort to have citizens of the state vote away their rights is merely a culmination of years of resistance to ballot initiatives by the legislature.

The never-ending legislative crusade against your right to self-governance

In 2017, the state legislature passed a law requiring “strict compliance” with the stated rules around ballot initiatives. This has opened the door to expensive litigation around a host of issues that come up with every citizen initiative, adding considerable expense and uncertainty to citizen initiative campaigns. Signatures are now regularly thrown out for reasons that include a signer writing “PHX” instead of “Phoenix” for their address, misplaced staples on the petition sheet, or a smudged notary stamp. Whole sheets of signatures can be disqualified for reasons like this, effectively disenfranchising all of those who signed with good intent.

Coincidentally, perhaps, the state legislature made this change shortly after Arizona voters passed an initiative that raised the minimum wage and tied those wages to the consumer price index (to the great benefit of Arizona’s workers in these inflationary times).

Even when initiatives qualify and win, state officials abandon any effort to be good representatives of the state’s citizenry and instead work to undermine or render irrelevant the work of the state’s voters. For example, take the Invest in Education initiative, or Proposition 208, which was approved by voters in 2020. It sought to address the state’s dramatic underfunding of public education by taxing the affluent and wealthy to fund school investment. Despite voters’ support for the issue, the governor and state legislators undercut the initiative by creating numerous exemptions before the proposition was ruled unconstitutional.

Notably, the Maricopa County Superior Court judge who ruled on the constitutionality of the initiative noted that the Arizona Supreme Court ruling he was following made a “muddle of law and politics”, which enabled legislators to undermine the will of voters: “If legislators can find a legal flaw in a measure they disagree with as a matter of policy, their incentive is now not to fix it but instead to exploit it,” he said according to the Arizona Republic.

The sort of maneuvering to disempower Arizona voters is all too typical of the politics around citizen initiatives nationally, and it reveals the oligarchical aspirations of state elected officials. Despite what many advocates say, initiatives are not some more pure form of democracy to be defended on that principled ground alone. Initiative campaigns have many of the same problems as candidate campaigns: they are expensive, they privilege donors, they empower political professionals as much as citizens, and so on.

But in this moment when elected officials are more concerned with playing partisan games than representing the state’s citizens, they are an important check on legislatures and governors. The effort to subvert the right to citizen initiatives reveals the growing conflict between elected officials and citizens, a conflict that is often obscured by the heat of partisan competition.

The right to citizen initiatives is on the ballot this November and it is a significant voting rights issue for all Arizona citizens.