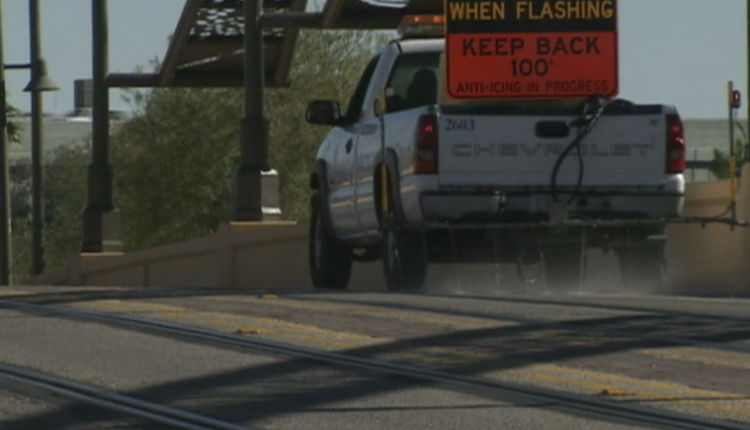 TUCSON (KVOA) – The City of Tucson has announced that crews from the Department of Transportation and Mobility (DTM) will be launching ‘Operation Freeze’ in preparation of freezing temperatures forecasted for the next couple of nights.

‘Operation Freeze’ is “a safety initiative put into place to make sure City bridge decks are free of ice and safe for motorists to drive over.”

During ‘Operation Freeze’, “Wet Road Ahead” signs are placed by city crews at bridge entrances. Magnesium chloride is also sprayed on the roadways, as it lowers the freezing temperature of water and prevents ice from forming.

According to the DTM, “A light coating of magnesium chloride produces no negative effects on groundwater, surface water or vegetation. Magnesium chloride is an effective ice suppressant agent lasting for approximately 10 days.”

Over 50 city bridge decks will be sprayed and monitored in the evenings and again in the mornings to make sure no ice has formed on the roadways.

Motorists should be aware of city crews working on bridge deck crossings and use caution.