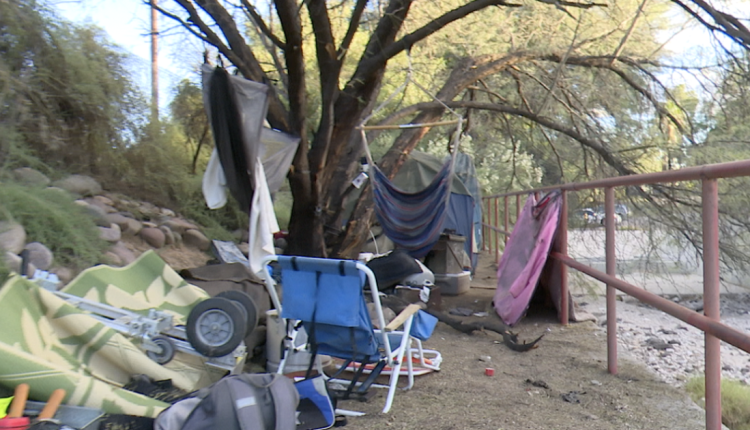 TUCSON, Ariz. (KGUN) — Lydia Soto laughed as she marked a red dot on her bingo board at Sister Jose Women’s Center.

She’s temporarily living there after living homeless for about 2 years, saying “Sister Jose’s has always been there for me.”

Even though she didn’t live in a homeless encampment, she used to live in a tent.

“You cannot wake up and do the things that normal people do when they have their home,” Soto said.

The City of Tucson is hoping to connect houseless people like Soto to resources like Sister Jose’s.

“A lot of people don’t have any income, none, no family. It’s very sad to see that and the City of Tucson is trying to make resources for other places to go,” Soto said.

The City of Tucson City manager Michael Ortega said the city is pushing hard to expand shelters because they were limited due to COVID.

Holly Hughes is also living at Sister Jose’s and is homeless. She’s pregnant and is about to have her baby next month. While she didn’t live in a homeless encampment, her mom does.

She said living in encampments put people through emotional stress and agrees with the City’s plan.

The City of Tucson also received $2 million from the State of Arizona. They’re putting that money towards cleaning up encampments. They’re also hoping to extend the program to include the homeless work program.

Ortega said residents can request for an area to be cleaned up through their homeless encampment website. He said they are cleaning encampments on private property at the owner’s request but are focusing on cleaning up areas on public and street right of ways and washes.

Charles Allen is a volunteer with Tucson Clean and Beautiful who cleans up washes that have homeless encampments.

He said he interacts with the homeless at the encampments on a weekly basis.

“They continue to teach me an awful lot more about what life is like out here,” Allen said.

The City uses a 3 tier system to assess all homeless encampments.

Allen does not agree with tier 3 which clears out everyone living in the homeless encampment within 72 hours.

He said tier 2 is a better solution for homeless people.

“To make sure all of our camps meet tier 2 standards which is a camp that’s occupied but needs help cleaning things up,” Allen said.