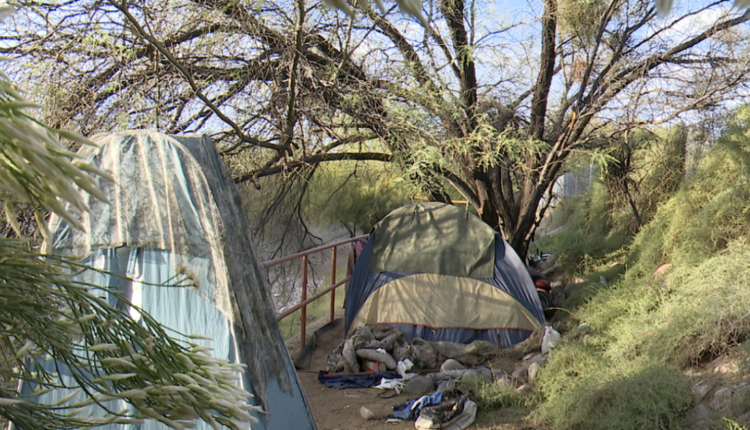 TUCSON, Ariz. (KGUN) — As Charles Allen walked through an empty houseless encampment, he didn’t see much around.

He helped to clean up the encampment just days ago after the City of Tucson ordered the houseless community to clear out the area.

“Nothing pleases me more than when somebody comes up and says this is the cleanest wash that we’ve ever camped in,” Allen said.

Since many of them are not ordered to leave by the City, he also cleans up trash at the encampments when the houseless live there.

“We want to make people feel welcome,” he said.

He’s a volunteer with Tucson Clean and Beautiful’s Adopt a Wash program. They clean up trash at washes and homeless encampments.

He’s a retired registered nurse and worked for the Pima County Jail and Arizona State prison, so caring for people is in his nature.

Now Allen feels like they’re family, many of them not having family of their own.

“They’re wonderful people and I’m very glad to continue to visit them….pretty much they have nobody so it’s good to stay in touch with the people that I used to care for,” Allen said.

However, some of them have not found their forever home because the City of Tucson orders them to relocate within 72 hours if they find violence and crime in the encampment, whether it’s towards the surrounding community or people living in the encampments.

The City said since late October when their encampment reporting website launched, they’ve had about 1,533 reports. They said about 293 of those got cleaned up.

They said in about 15 percent of their reports, the houseless people are ordered to leave their encampment so the City can clean them up. The City said they offer them resources and shelters to stay at.

However, the City said many of the shelters are at full capacity, especially in the winter months.

Allen said not all of the houseless who are ordered to relocate go to shelters because they don’t qualify.

Allen said many of them go back to the same site within a few days or go to a campsite at a nearby neighborhood.

He said that’s why he helps them relocate, even up to 10 times, and will do so no matter how many times it takes.

“They continue to teach me an awful lot more about what life is like out here,” Allen said.

In Rural America, Deadly Costs of Opioids Outweigh the Dollars Tagged to Address Them