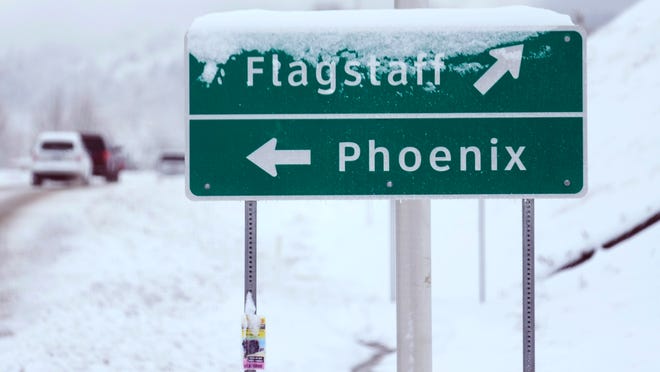 After a weekend of rain and snow across Arizona, clearer skies are expected by the end of this week, according to the National Weather Service.

With a new year, a new daily rainfall record was set in Phoenix on Jan. 1. With .43 inch of rain reported at Sky Harbor International Airport by the end of the day, the previous record of .22 inch set in 1906 was surpassed , according to the weather service.

About .54 inch of rainfall were reported between Sunday and early Monday, according to Gabriel Lojero, a meteorologist for NWS Phoenix.

On Sunday, rainfall across southern Arizona varied, according to Gary Zell, a meteorologist for NWS Tucson. In the Sierra Vista area, gusts of over 50 mph and over an inch of rain were reported.

“It was highly variable from around 0.1 to 0.2 … to over an inch depending on where those showers were lined up,” Zell said.

In Tucson, it was breezy on Sunday, with wind speeds around 25 mph and gusts of 38 mph, Zell said. About 9 inches of snow were reported in Mount Lemmon early on Monday, according to Zell.

Megan Taylor, a meteorologist for NWS Flagstaff, said about 8 to 12 inches of snow were seen over the weekend in the Flagstaff area.

Clearer skies in the forecast for Phoenix, Tucson

Lojero said conditions would improve in the Phoenix area this week with a “mostly quiet weather” forecast for Monday.

On Tuesday, scattered showers are expected between 4 am to 10 am as a “weak” weather system moves through the Phoenix area, Lojero said. The accumulation of rainfall will be under one tenth of an inch.

The high temperatures on Tuesday will be in the upper 50 degrees, which Lojero said is a bit chilly for this time of the year.

“Once this weather system moves out, we’re going to go on to a tranquil period with mostly dry conditions,” Lojero said.

In the Tucson area it will be mostly cloudy on Monday night and into Tuesday morning, Zell said. The high temperature on Monday was expected to be 56 degrees with about 20% chance of rain at night.

The weekend in Tucson is looking mostly sunny with high temperatures around 66 degrees and no chances of rain, according to Zell.

In northern Arizona, including the Flagstaff area, more snow is in the forecast from Monday night until Tuesday afternoon. Taylor said about two to four inches are expected.

“It’s definitely going to affect the Tuesday morning commute. And so we want to make sure people know it’s coming and don’t get caught off guard thinking that the snowfall is over,” Taylor said.

On Tuesday, the high temperature in Flagstaff will be around 32 degrees, which is much colder than average, according to Taylor.

For the latter part of this week, high temperatures will be around the upper 30 degrees and lower 40 degrees, which Taylor said is closer to the normal temperature of 42 degrees for this time of the year.

10 Things To Do & See In Yuma, Arizona, The Sunniest City On Earth