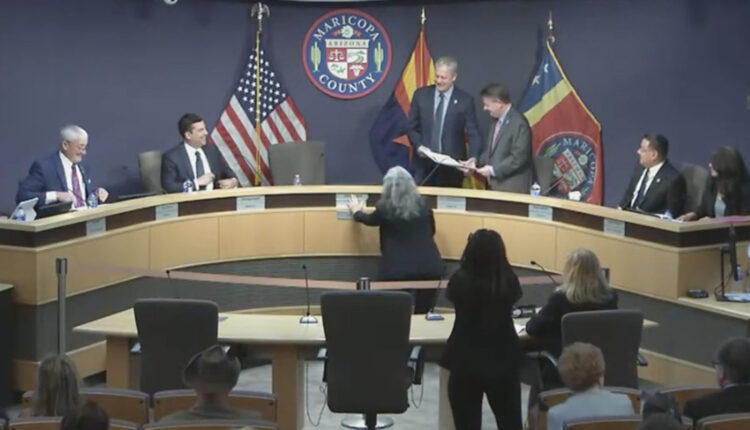 Clint Hickman picked as 2023 Maricopa County Board of Supervisors chair

PHOENIX — Clint Hickman was selected Thursday to be chairman of the Maricopa County Board of Supervisors for the next year.

The board picked Hickman, who represents District 4 in the West Valley, during its first formal meeting of 2023.

“It’s a tough job because you do not know what the future will bring,” Hickman said after getting unanimous approval from his cohorts. “But sometimes on some topics we know what we’re facing.”

Hickman takes over for Bill Gates, who served as the face of the board while the state’s largest county was under scrutiny for Election Day ballot tabulation issues in November.

Last week, the county announced that former Arizona Supreme Court Chief Justice Ruth McGregor would lead a probe into why some tabulators had difficulties reading ballots at about one-third of the county’s voting centers on Nov. 8.

“Bill, you handled a difficult 2022 with grace and poise,” Hickman said after switching seats with Gates. “I don’t know that there’s ever been a chairman of this board in the public eye more than you over the last year, and you made us proud with your transparency, integrity and impassioned defense of democracy.”

Hickman cited homelessness and the regional water supply as top priorities for the coming year.

The five-member Board of Supervisors is responsible for Maricopa County’s budget, Election Day operations and appointing a county manager, who serves as chief administrator.

The supervisors select a new board chair each year. Hickman, one of the board’s four Republicans, is taking the gavel for the third time. He last served as chair in 2020.

Hickman, who helps run his family’s egg business, was first appointed as a supervisor in 2013 and was elected to full four-year terms in 2016 and 2020.

Time is running out. Get covered by January 15.