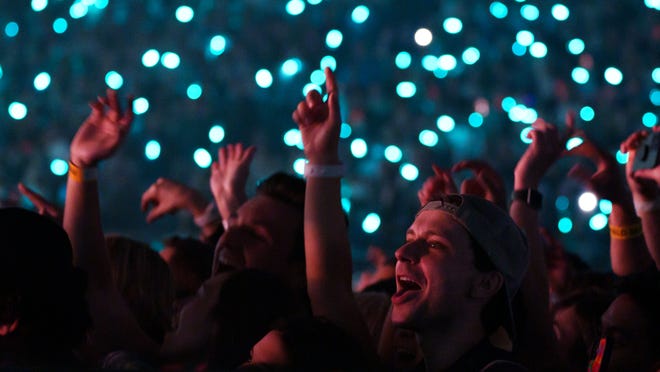 Chris Martin of Coldplay was nearing the end of a crowd-pleasing concert at State Farm Stadium when he paused to thank the crowd for “how intense and wonderful” we’d been.

“If it’s OK with you,” he said, “we have to quickly shoot a video with all of you as the sort of energy.”

And with that, he introduced a band of puppets called the weirdos.

“They’re from another planet, sort of,” the singer explained.

“And we’re just gonna be filmed in the audience as well. But please, if you could just give four minutes to this young band. They’re just starting out.”

It wasn’t the first we’d seen of the weirdos’ lead singer.

But this time, Martin and his bandmates — Jonny Buckland, Guy Berryman and Will Champion — left the stage and turned the concert over to the Weirdos, who set up on the second stage and mimed along to “Biutyful” from Coldplay’s latest album, ” Music of the Spheres.”

‘You just have to follow your heart’:How Coldplay’s Chris Martin learned to trust himself

It was an unexpected bit of silliness that felt like being part of something special but also inserted a bit of an awkward transition into the proceedings as the action moved from the video shoot to Coldplay on a tiny third stage with the houselights up.

They quickly made up for the lost momentum with a haunting rendition of “Sparks” with Preston Wait on pedal steel guitar before treating the fans to a country song they’d written just for the occasion, “Phoenix AZ.”

It was endearingly sloppy; Martin adopted a credible twang as he made his way through references to that city in the West “where they play basketball slightly better than the rest” and “feeling so good where the Cardinals play.”

They returned to the main stage after that for a beautiful version of “Fix You,” which became a massive singalong, following through with a rousing rendition of “Humankind” from “Music of the Spheres.”

It would’ve been the perfect way to say goodbye. Instead, they brought the puppets back for a momentum-crushing second pass at “Biutyful,” with Coldplay on the main stage this time while the puppets mimed along once again for the cameras on the second stage.

As the final hurrah of a two-hour concert? It fell a bit flat — a rare misfire for a band that would otherwise seem to have mastered the art of the 21st Century stadium concert.

The set included ‘Yellow’ and ‘Something Just Like This’

Other than that, it was a great night at the stadium with the most successful rock band of the century.

They managed to put the focus squarely on their latest album while also offering an entertaining overview of their career, from a rousing rendition of “Yellow” to their Chainsmokers collaboration, “Something Just Like This.”

There were achingly beautiful ballads, from “The Scientist” to “Fix You.” Other songs, from “Paradise” to “In My Place” and “Clocks,” went heavy on the widescreen grandeur, ready-made anthems that soared beyond the back rows of the stadium.

Still other highlights made the most of their eager embrace of club-ready dance grooves, from “Adventure of a Lifetime” to the throbbing house beats of the majestic “A Sky Full of Stars.”

That may explain how they became the most successful rock band of their generation.

Chris Martin’s voice was up to the challenge

“A Sky Full of Stars” was the point in the set where Martin, whose vocals were up to every challenge the songs required, chose to ask the fans to put their phones away if only for a moment to “just be with us for one song.”

There was no shortage of crowd pleasing spectacle.

A camera followed the musicians as they strolled through backstage areas of State Farm Stadium to the strains “Flying Theme” from “ET” After making their way to the stage, they dove right into “Higher Power,” which featured fireworks, confetti and a wide array of flashing colors on the LED wristbands that were given to each ticketholder.

For the second song, “Adventure of a Lifetime,” giant beach balls or balloons were dropped into the crowd as chimpanzees dressed as astronauts danced on the video monitors.

Bursts of flames shot from the floor for “People of the Pride” and the members of the band donned goofy science fiction masks for “Infinity Sign,” “Something Just Like This” and “Midnight.”

There’s a silliness to Coldplay that offsets the seriousness of Coldplay to brilliant effect.

And they’ve clearly mastered both sides of that spectrum, especially Martin, whose enthusiasm for whatever mood he happened to be diving into at the moment was a wonder to behold.

His grin was everybody’s grin in moments as intoxicating as “Adventure of a Lifetime,” on which he told the crowd “Everybody go low/ Let’s get down low” then had everyone jump as their LED wristbands cycled through colors.

There’s a joy Martin brings to the table that makes it hard to understand how anyone could fail to be convinced.

A few weeks prior to the show in Glendale, Martin talked to the Republic about how “crazy good” the energy has been on their first tour since the pandemic shut everything down.

“Because everyone’s so happy to be there,” he said. “Most of all us. Any shred of complacency we might have had is long gone.”

And you could definitely feel that joy in his performance.

The emotional vulnerability that introduced the Coldplay brand at the turn of the century was every bit as powerful when Martin chose to use it. They’ve just added other flavors to the mix.

Toward the end of the set, he thanked the crowd for dealing with the traffic on the night of Game 6, adding, “I feel like choosing to go to a concert like this is not necessarily about whether you like the band but how much you can handle traffic.”

HER was captivating in a spirited set

Between the traffic and the parking situation, opening for Coldplay at the first major stadium show in metro Phoenix since the start of the pandemic had to be a little less career-defining than formerly local Kacy Hill was thinking it would be.

I missed her set while swearing often in the traffic less than five miles from the venue.

Having made it there in time to catch the second half of HER, though?

If you haven’t seen this woman tear it up on lead guitar in her rhinestone-studded sunglasses at the helm of a gospel-flavored neo-soul ensemble with a vocal range that allows for the flashiness of a Mariah Carey with the raw emotion of a Prince, you’re missing out.

The back half of her set included a medley of Queen’s “We Will Rock You,” Joan Jett’s cover of the Arrows’ “I Love Rock ‘n’ Roll” and her own song “Glory,” as well as a spirited cover of the Lenny Kravitz classic “Are You Gonna Go My Way.”

But she was every bit as captivating when she hit us with a song she said was “totally brand new.”

Music of the Spheres

Adventure of a Lifetime

Hymn for the Weekend

People of the Pride

A Sky Full of Stars