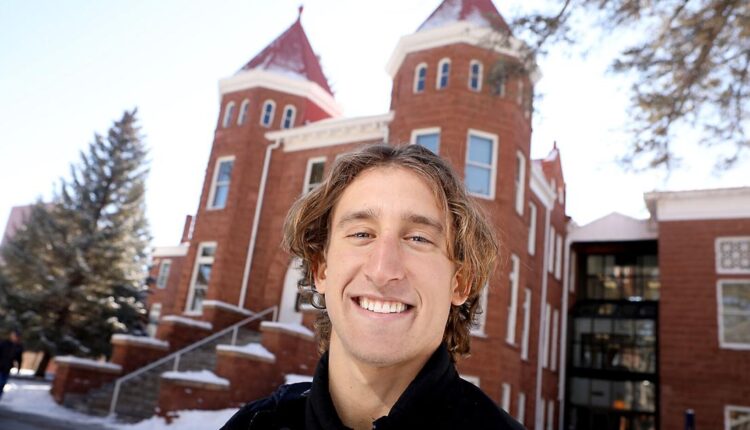 Coleman Owen will be graduating from Northern Arizona University (NAU) Friday with a degree in finance.

He said it feels “awesome” to be so close to commencement, like closing in on a win on the gridiron.

“I don’t even know how to describe it — I feel like it’s been so fast,” he said.

He added: “Everything’s flown by. I really enjoyed my time. It’s a little sad to be done with my undergrad degree, but I’m glad to finally get it done.”

Originally from Gilbert, Owen said he came to NAU because it gave him the opportunity to play football. The college’s location ended up being a good fit — close enough to visit home while still far enough for some independence — though he said he still wasn’t sure if he liked snow.

“Me and my brother grew up playing a bunch of sports, but football was the one that I always loved the most,” he said.

After a few injuries his junior year, he had a “pretty good” senior season in high school, leading to the offer to continue playing for the Lumberjacks.

“I wasn’t going to pass that down,” the receiver said.

Northern Arizona receiver Coleman Owen runs after catching a ball during a road game in the 2021 season.


He’s continued playing for the team since, with a few setbacks. He tore the meniscus in his knee twice his freshman year, leading to two surgeries, and then the COVID-19 pandemic meant another pause.

A week ago he had another surgery on his shoulder, but he still plans to continue playing as long as he can.

Those delays also mean he has another two years of eligibility, and he plans to continue to play for NAU if accepted into the MBA program he is in the final steps of applying to.

Being on the football team has taught him a lot so far, Owen said.

“I’ve learned so much,” he said. “The coaches, staff here and all my teammates, they’ve just been so awesome to me. They’ve taught me a lot of leadership traits, how to deal with different diversities and different issues that go on within a team. I think it’ll really help me, especially into the business world, it’ll help me keep growing.”

He decided to study finance as it used his strength in math and could lead to an interesting career.

“I’ve always been super interested in math,” he said. “It’s always been my best subject in school. … Finance still has a little to do with math and a lot to do with numbers.”

Studying at the WA Franke College of Business with his fellow business students has been “a blast.”

“Most of the students I’ve worked with have been the same throughout the four years. So it’s been really nice to get to meet new people and get to learn a lot of new things,” he said.

Volunteer work has also defined Owen’s time at the university. He spent several days of his freshman and junior years helping fill and place sandbags to keep floodwaters from entering homes in Flagstaff neighborhoods. With NAU’s Fellowship of Christian Athletes, he led a weekly Bible study and went to support other teams at their games. In his freshman year, he helped out with a school shopping event, taking a local student around Walmart to pick out school supplies and clothing.

He has been volunteering since high school and attributed his involvement to his faith and bringing up.

“I think giving is one of the biggest parts of life,” he said. “It gives you a lot of joy, a lot of satisfaction, even though it is taking time out of your day. It’s awesome to experience things with others and give back to the community.”

Owen will be finishing his undergrad time at NAU having accomplished most of his goals.

He said he had created a list of academic and athletic goals before going to college, and that he’s managed to check all the boxes on the academic list. The big two, he said, were to maintain a 4.0 GPA and to earn the Gold Ax Award.

He was among 30 NAU students given the Gold Ax Award for fall 2022.

The award “recognizes seniors who have made outstanding contributions to the university and community.”

Owen hopes to continue his education in Flagstaff after graduating and is finishing the process of applying for an MBA that, if accepted, he will start in the summer. In the long term, he has hopes of becoming a hedge fund manager.

He’s already made a list of goals for the next phase of life, including being accepted into the MBA program, keeping a 4.0 GPA and opening his own business.

His advice to students starting at NAU was to “just keep pushing.”

“I know that freshman year, it’s hard, especially if you come from a different city,” he said. “I wasn’t too far away, which was nice, I was able to visit home, but it is hard being away from family and friends and high school. Everything in the beginning seems like it’s a little tough, but once you get in a groove each semester, it gets a lot easier. … Everything gets a lot easier, so just keep pushing through it.”