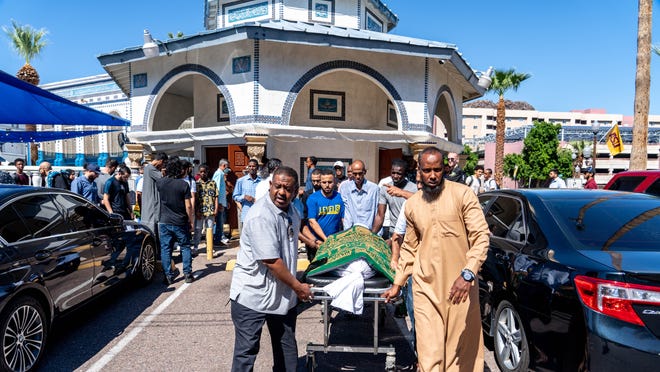 Family, friends, and community members called for justice Sunday evening at a gathering in honor of 34-year-old Ali Osman who was shot and killed by Phoenix police after throwing rocks at them in September.

“We must hold those accountable for what they did to him. We must stand together in solidarity and speak up against police brutality,” Nejra Sumic, a national field manager from We Are All America, said to a small crowd of supporters on Sunday.

The gathering came days after Phoenix police released edited body camera footage of the confrontation on Sept. 24 between two officers and Osman near 19th Avenue and Tuckey Lane, just south of Glendale Avenue.

The video shows Osman with his hands up as an officer approaches. The officer pulls his gun and is heard shouting, “Drop it.” Osman then throws a rock at the officer before being shot and falling to the ground.

An image of a broken spotlight on one of the patrol vehicles, which police said was caused by Osman throwing rocks, can also be seen in the public video.

Osman’s family and their attorney, Quacy Smith, held a news conference Friday, calling for the firing of the officers involved.

“This is not just homicide. This was murder. At least it was manslaughter,” Smith said during the Friday press conference at his law firm’s midtown office.

‘This was murder’:Family of man killed by Phoenix police reacts to video of shooting

That sentiment continued Sunday as activists, family members, and friends took the stage to share their thoughts at the gathering hosted by Black Lives Matter Metro Phoenix.

Bithera then explained the demands Black Lives Matter Metro Phoenix expects from the Phoenix Police Department to get justice for Ali Osman.

These demands included an apology to the family, releasing the names and firing of the officers involved in the shooting, and more mental health de-escalation response training, Bithera said.

Another theme of the event was a wider call for change within the Police Department and a continued push for community support.

“There is a policing problem in this country … and that is gonna require change from the top to the bottom,” Quacy said on Sunday.

Once the investigation is complete, the case will be sent to the Maricopa County attorneys for a review where the determination will be made for if it was a justified shooting, Phoenix police said at a news conference in September.

At prior news conferences and at the gathering Sunday, loved ones remembered Osman as a caring and selfless person.

Osman was a Somali refugee who came to the United States at 14, his friend, Loay Alyousfi, previously said.

A memorial was held Sept. 30 for Osman at an Islamic community center in Tempe.