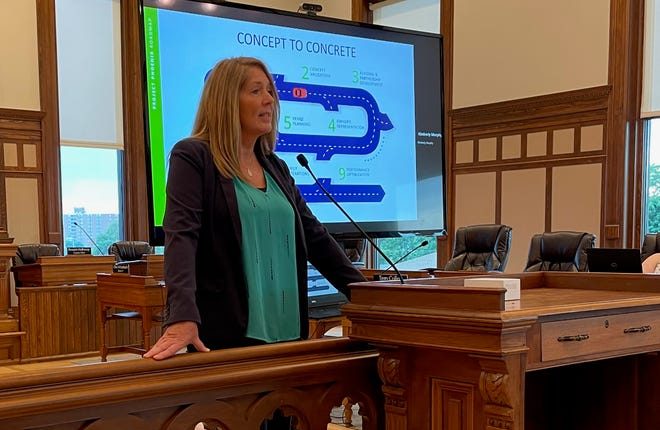 ADRIAN — The Lenawee County Commission, Tecumseh City Council and members of Lenawee Now as well as the public were on hand Monday evening at the old county courthouse for a presentation on Phoenix Project as well as a question-and-answer period that went for more than an hour and a half.

The presentation about the proposed recreation and community complex in Tecumseh by county administrator Kim Murphy, deputy county administrator Shannon Elliott and Tecumseh economic development director Jessica Sattler only lasted about 20 minutes at the start of the gathering at 5 pm The remainder of the time until 7 pm went to the public.

The presentation included a timeline of events for the project:

• Early 2019: The city of Tecumseh was initially contacted by Sisu Sports about building a smaller indoor/outdoor sports complex.

• Mid 2019-early 2020: The city of Tecumseh met with Sisu several times regarding a potential Tecumseh location, however, Sisu’s owner, Bill Leisenring, was transparent that other locations and private partners were being considered.

• Late 2019: Lenawee Now made Tecumseh city staff aware that Sisu was meeting with the city of Adrian. Tecumseh staff worked openly with Adrian and Lenawee Now.

• November 2020: Tecumseh staff reintroduces Sisu to Lenawee Now to discuss the project and spinoff technology companies that will partner as a result.

• May 2021: Initial feasibility study kicks off.

• October 2021: Feasibility study reviewed by Lenawee County Board of Commissioners. Commission authorizes satisfaction notice to the seller to proceed with closing by 8-1 vote in public meeting.

• April 2022: SFC presents results to Lenawee County Board of Commissioners in public meeting.

• May 2022: SFC and environmental experts available for Q&A with Lenawee County Board of Commissioners at public meetings.

Throughout the course of the evening, the audience was reminded several times that although the interested parties have been through early concept development, they are still very early on in the process at Stage 2 of nine stages. Stage 2 is concept validation. The next step is to secure funding. At any step in the process the county has an exit ramp to leave the project.

Murphy asked the crowd at one point if they have children or grandchildren living in the area. Almost no one raised their hand among the group of mostly senior citizens. Their children and grandchildren have moved from the area.

Murphy stressed that the project is meant to be a catalyst to bring jobs, vitality and revenue to the county. She said if this wasn’t the project that would do that, she was very interested in knowing from the community what project would.

Lenawee Now has requested that an independent auditor be brought in to verify the numbers in the 20-year financial proformas SFC produced and Murphy said the county recently contracted with the Rehmann accounting firm to do that.

While the county is not in the stage of securing funding, which is the third step in the process, the county has been in the process of identifying funding sources for the $88 million project. Murphy said she has asked the state for a line item in its budget in the amount of $10 million and the federal government for a line item in its budget of $5 million.

If those funds do not come through, the county will shelve the project or create something much smaller, she said. Murphy also said that the county would not bond for more than $20 million of the project at no additional cost to taxpayers. The intent is to use the $850,000 in marijuana money the county gets each year to pay off the bonds.

The bulk of the remainder of the costs would come from state and federal grants as well as some private investors. The city of Tecumseh has also pledged its financial support.

The intent is to provide services to the community, Murphy said. Private enterprise is not interested in doing that. It is only interested in making money, although there are private investors who have pledged their support for Project Phoenix, Murphy said. She cannot name them because people who have voiced their support of the project have become targets for the opposition and have been attacked.

Murphy does not look at sports facilities that are close by to be competition. The travel teams run on a circuit, she said. She looks at it more as a collaboration than a competition.

If the county does not move forward with the project, the work put into it thus far will not be lost. Murphy said that they have a great knowledge base from which to launch a better catalyst for community growth and development. At the very least the county will have cleaned up its biggest brownfield site and will be able to sell the Tecumseh Products site it purchased for $2.3 million in one large chunk or in smaller pieces.