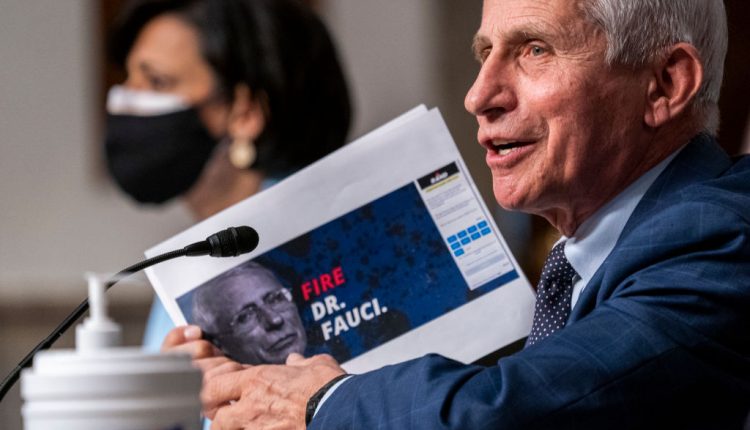 WASHINGTON — Senators from both political parties expressed their frustration with the Biden administration coronavirus response team during a Tuesday hearing that keyed in on the Centers for Disease Control and Prevention’s guidance on vaccines, as well as the shortage of COVID-19 tests available for Americans.

The hearing also was highlighted by a tense exchange between Kansas Republican Sen. Roger Marshall and White House chief medical adviser Anthony Fauci that ended with Fauci on a hot mic calling Marshall a “moron.”

Marshall in a statement afterward said Fauci had a “very frustrating day” before the committee being questioned about U.S.-funded research in China and Fauci’s personal financial disclosures. Marshall and Fauci disagreed about whether the disclosures are publicly available. “Calling me a moron during a Senate hearing may have alleviated the stress of the least trusted bureaucrat in America, but it didn’t take away from the facts,” Marshall said.

They also said there aren’t enough at-home COVID-19 test kits or other testing options available for members of the public.

“I am disappointed by the testing challenges that we’re facing,” Sen. Patty Murray, a Washington Democrat and chair of the committee, said. “Tests are hard to find.”

Dawn O’Connell, the assistant secretary for preparedness and response for the Department of Health and Human Services, said making sure schools have enough testing supplies is a priority for the agency.

She said the administration invested $10 billion in the American Rescue Plan that was allocated to states for testing programs and provided $650 million to a program called Operation Expanded Testing, which sets up regional testing hubs that schools can make contracts with for testing.

“But that doesn’t work if tests aren’t available,” O’Connell said. “So ASPR (Assistant Secretary for Preparedness and Response) is working directly with states to match additional manufacturing capacity with states that need it.”

The director of the Atlanta-based CDC, Rochelle Walensky, said that the agency will continue to update its guidance as the agency learns more information about the coronavirus and its variants.

“Omicron is likely not to be the last curveball this virus throws at us, but we have the tools to prevent further spread of this virus,” she said in her opening statement, adding that it’s important for the administration to continue its push to vaccinate and boost Americans.

When it comes to misinformation, Republicans on the committee clearly weren’t trying to stop the spread.

Fauci, who is also the director of the National Institute of Allergy and Infectious Diseases, made a similar prediction, stressing the need for Americans to continue to get vaccinated and wear protective masks.

“There will inevitably be another variant,” he said.

Sen. Bob Casey, a Pennsylvania Democrat, asked the witnesses for an update on vaccines for children 4 and under. He said that many parents are anxious to vaccinate their children.

Janet Woodcock, the acting commissioner for the Food and Drug Administration, said that the agency is working as quickly as possible “so that vaccines are available for the youngest children.”

Sen. Richard Burr, a North Carolina Republican and the ranking member of the committee, said he was frustrated by the guidance released by the CDC and on the White House’s messaging on COVID-19 boosters. Booster shots initially were recommended just for a subset of the population by federal health officials, but in late November the advice shifted to all adults over 18 as variants began to spread.

“The way this administration rolled out boosters was a disaster,” Burr said. “The American people are right to be confused.”

Burr added that he received his booster shot, but said the Biden administration was not clear in its messaging urging Americans to get their booster until the delta variant spread in the U.S.

Walensky said that the CDC recently expanded eligibility for booster shots for children ages 12 to 15 within five months after their second Pfizer or Moderna dose.

Another issue Burr raised was testing, and how White House press secretary Jen Psaki was dismissive of the idea of sending COVID-19 tests directly to Americans’ homes.

“I’m not questioning the science,” he said. “I’m questioning your communication strategies.”

The White House recently announced plans to send out 500 million tests directly to Americans who request them, but those tests could take weeks to be delivered.

Marshall during his turn told Fauci that he has “lost his reputation,” questioned Fauci’s personal finances and asked if he would submit his disclosures to Congress.

Fauci said his financial disclosures have been public for more than 30 years as he’s served in the federal government. Marshall said he has not been able to have access to that information.

“What are you talking about?” Fauci responded. “My financial disclosures are public knowledge. You are getting amazingly wrong information.”

Marshall continued to press him on where his staff would find the information. Murray stepped in and said that Fauci would get that information to Marshall’s staff.

“What a moron. Jesus Christ,” Fauci said quietly at the conclusion of the exchange, but his microphone picked it up.

A Biden administration official slammed the GOP line of questioning.

“When it comes to misinformation, Republicans on the committee clearly weren’t trying to stop the spread,” HHS spokesman Ian Sams said in a statement. “At a time when America is seeing rising COVID cases, it’s disappointing and frankly unacceptable that Republican Senators chose to spend a hearing with the country’s leading public health experts spreading conspiracy theories and lies about Dr. Fauci, rather than how we protect people from COVID-19. The Biden Administration will continue to focus on getting more Americans vaccinated and boosted and helping Americans get access to the tools to keep themselves and others safe. We would encourage these Republicans to join us.”