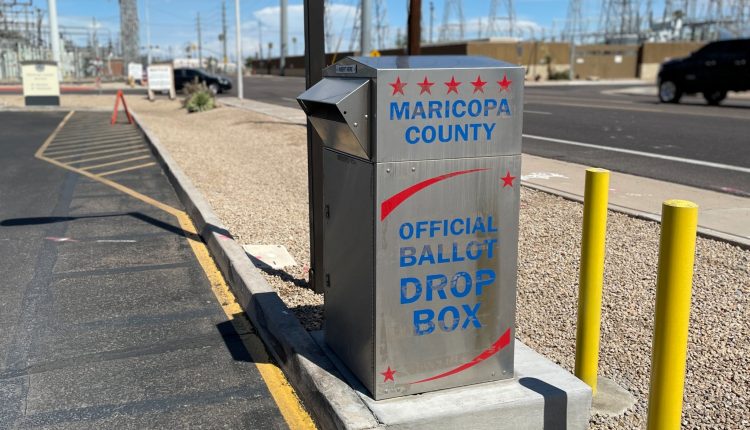 But in recent weeks, they’ve at times been monitored by volunteers with far-right organizations, prompted by former President Donald Trump’s claims of widespread fraud and misinformation about drop boxes, according to lawsuits challenging their conduct.

In Maricopa County, they’ve allegedly approached and harassed voters, taken photos of their license plates, and stood nearby armed and wearing bulletproof vests. The Arizona secretary of state’s office detailed the complaints and has referred at least six incidents to the U.S. Department of Justice and Arizona attorney general.

On Monday, after previously denying an effort to stop the drop box monitoring, a federal judge issued a temporary restraining order preventing Clean Elections USA, a QAnon-linked group, from continuing its poll monitoring activities. The order bars anyone from the group from training or encouraging others to intentionally come within 75 feet of a drop box or a building where a drop box is held.

Across the country, election workers and voters are growing increasingly concerned about the threats of voter intimidation at the polls, and experts are making sure they’re equipped with the tools and resources necessary to deal with the threats. The Brennan Center for Justice released a guide overviewing federal and state laws that protect against intimidation, focusing on 10 states where the risk that intimidation could disrupt the voting process is high.

In those 10 states (Arizona, Florida, Georgia, Michigan, Nevada, New Hampshire, North Carolina, Pennsylvania, Texas and Wisconsin), the amount of anti-voter activity has been high and groups have been organizing to do poll watching, explained Sean Morales-Doyle, director of the voting rights program at the Brennan Center.

“We’ve probably seen more intensity and volume (in Arizona) than in other places. Because so much of the voting happens in Arizona via mail, it began earlier,” he said.

“We have reason to be concerned that there’s an increased risk of voter intimidation this year than in years past,” he added.

Voters should report intimidating incidents to poll workers or local election officials, who can then make the determination whether to pass the information to law enforcement. If voters feel like they’re being threatened with violence, they should also reach out to law enforcement directly, Morales-Doyle said.

But election experts say that despite an increased concern this year, reports of intimidation shouldn’t dissuade voters from casting ballots. The vast majority of voters will have no problems this year and there are ample resources for voters to rely on if they do feel uncomfortable in any way.

Federal law includes a number of protections against intimidation.

The Voting Rights Act and the Civil Rights Act of 1957 both prohibit the actual or threatened intimidation, threats, or coercion of voters, according to the Brennan Center guide.

Additionally, the Ku Klux Klan Act of 1871 prevents conspiracies that use intimidation to prevent voters from casting ballots in federal elections, and the National Voter Registration Act prohibits intimidation of people registering to vote.

These laws protect voters not only from physical harassment and intimidation but also from being monitored at polling places.

Arizona, for example, has a law making it a felony to practice intimidation against a person to compel them to vote or refrain from voting. The intimidation of a voter to prevent them from voting is also a felony in Florida, Georgia, Michigan, Nevada, New Hampshire, and Wisconsin.

Maricopa County Recorder Stephen Richer, who oversees elections in one of the most populous counties in the nation, said he encourages voters who feel intimidated by people watching drop boxes to make a formal report with law enforcement.

The U.S. attorney’s office in Arizona has vowed to prosecute violations of state law.

A recent Reuters poll found that more than 40 percent of voters are worried about threats of violence or voter intimidation at polling places during the midterms.

While the alleged intimidation in Arizona so far has come from extremist groups who believe the 2020 election was stolen from Trump, a longstanding legal protection preventing the Republican Party from engaging in voter intimidation is no longer in place this election cycle.

In 1981, the Democratic National Committee filed a lawsuit alleging that the Republican National Committee had hired off-duty police officers to patrol majority-minority precincts in New Jersey during the gubernatorial election. The cops wore “National Ballot Security Task Force” armbands and served to intimidate voters, according to the lawsuit.

The Democrats secured a consent decree, prohibiting the RNC from engaging in intimidation practices for 25 years. The decree was modified several times when Democrats alleged that Republicans weren’t following it. But in 2018, a judge refused to extend it again, and the decree officially expired.

This election cycle, the RNC has prioritized poll watching, as all restrictions have been lifted. The party has hosted more than 5,000 trainings around the country since last year on how to monitor voting, according to the Washington Post.

The RNC was not available to comment on its poll watching plans.

Though there haven’t been widespread reports of poll watching leading to complaints of voter intimidation, the massive number of people the RNC will have dispatched on Election Day could mean that there will be incidents.

In Arizona and elsewhere, Republican lawmakers and candidates have also supported the poll watching efforts.

“WATCH ALL DROP BOXES. PERIOD. SAVE THE REPUBLIC,” Mark Finchem, a Republican election denier who is running for Arizona secretary of state, tweeted on Oct. 20, just one day before armed and masked watchers parked by a drop box in Maricopa County.

Kari Lake has also called for people to monitor drop boxes, saying in May to right-wing media that “we will sleep by those drop boxes” and “I’m rolling out my sleeping bag.”

Richer did not directly blame the GOP candidates for the voter intimidation, saying instead that he believes “anyone who has knowingly or recklessly promoted disinformation about elections has contributed to this environment we’re now in.”

The drop box watchers in Maricopa County are volunteering with a group called Clean Elections USA, one watcher told an ABC15 reporter. Clean Elections USA is working with True the Vote, a Texas-based organization which created the documentary “2000 Mules” purporting to show evidence of widespread ballot fraud in the 2020 election, according to reporting by Votebeat.

Clean Elections USA is recruiting people across the country to watch drop boxes, and Votebeat reports that 4,500 have signed up to help the effort.

A few of the drop box watchers in Maricopa County allegedly have been armed, which has ignited concerns that more vigilantes will show up on Election Day with firearms.

In Little Rock, Ark., an argument allegedly broke out outside a polling place last week between supporters of different mayoral candidates, and one individual “indicated he had a gun,” according to one candidate who witnessed the incident.

Courts have long held that guns do not belong at polling places. According to the Giffords Law Center to Prevent Gun Violence, six states (Arizona, California, Florida, Georgia, Louisiana, Texas) and Washington, D.C., explicitly prohibit all firearms at polling places and another four prohibit concealed guns at the polls.

Polling places are also often located inside schools or other public property where guns are already prohibited. And most states, including many where the law doesn’t explicitly mention polling places, have a law prohibiting the use of a firearm to intimidate other people.

In September, Democratic U.S. Sen. Chris Murphy introduced the Vote Without Fear Act, which would prohibit firearms within 100 yards of any federal election site.

“Free and fair elections cannot happen in the face of armed intimidation at the polls, but that’s become a disturbing reality for some Americans, as extremists driven by conspiracy theories about voter fraud are increasingly showing up to polling places with guns,” Murphy said in a statement.

Morales-Doyle of the Brennan Center noted that it’s still unlawful in every state to use a gun to intimidate voters, whether or not the state prohibits carrying a gun at a polling place.

Uniformed officers at the polls

The presence of law enforcement at polling places can be more complicated, as some voters feel protected by uniformed officers patrolling the area while some communities might see their presence as intimidating, especially given the history in the United States of police officers approaching and intimidating Black voters.

In some states, including Pennsylvania and California, police officers are violating the law if they show up to a polling place without being called. Other states require law enforcement to obey orders from election officials at the polls.

In New Jersey, the debate played out recently as Republican lawmakers pushed back on an amendment to legislation requiring police officers working the polls to appear in plain clothes, while Democrats said the bill is intended to prevent intimidation in predominantly Black cities.

A study published last December found that the presence of police at a polling place is associated with a 32 percent reduction in African American participation. The study said it was the first to quantify the effect of police presence on voting in the United States.

Voter intimidation this year could also come from right-wing sheriffs who have vowed to monitor polling places for potential fraud, citing false claims that Trump won the 2020 election. In Arizona, two groups of sheriffs are teaming up with True the Vote to expand the role of sheriffs in election monitoring.

Voting should be smooth for most

With threats of intimidation high this year, voters and election officials should be prepared. But Morales-Doyle said that the threats should not dissuade voters, the vast majority of whom will vote by mail or will go to the polls and have a normal and easy experience casting a ballot without intimidation from private or official actors.

“Yes, things are complicated,” he said. “Yes, there’s reason to be more concerned in some ways this year than in previous years. But I want to temper that concern and say that most voters are not going to face intimidation and should not be intimidated by what they’re hearing.”

“They should go vote with confidence,” he added, “and know that if they do run into some trouble, they’ve got election protection and election officials and many, many advocates who are watching developments closely, who they can rely upon to ensure that there won’t be any major disruption to our elections.”