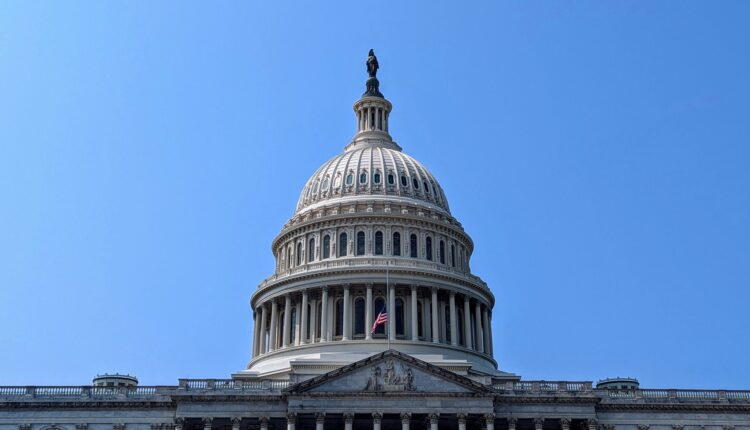 Congress clears one-week bill to fund the government, but many hurdles remain

WASHINGTON — The U.S. Senate sent President Joe Biden a one-week government funding bill late Thursday, giving negotiators a few more days to wrap up talks on what is expected to be a $1.7 trillion package to keep the federal government up and running through September.

The short-term bill is the second time Congress has leaned on what’s known as a continuing resolution this fiscal year to keep the lights on as lawmakers try to reach agreement on full-year appropriations bills. The big package likely also is the last opportunity for other priorities like legislation protecting the presidential electoral count process.

“Negotiations keep trending in the right direction, but we still have a lot of work left to do and not enough time to do it, unless we extend government funding for another week,” Senate Majority Leader Chuck Schumer said.

Senate Minority Leader Mitch McConnell noted that getting a government funding package done is essential to backing up the annual defense policy bill, which also was passed by the Senate on Thursday night, with “actual dollars and cents” for the Pentagon. The policy bill, known as the National Defense Authorization Act or NDAA, does not appropriate funds.

The Kentucky Republican said he hoped negotiators on the spending package can wrap up talks with bill text “that can pass the Senate before our hard deadline next Thursday.”

“Otherwise, I’ll support pivoting next week to a short-term resolution into the next year,” McConnell said.

The U.S. House voted 224-201 on Wednesday night to send the short-term spending bill to the Senate, though just nine Republicans voted for the measure amid opposition from their party leaders to Congress fully funding the government during the lame-duck session.

The U.S. Senate cleared the bill for Biden following a 71-19 vote Thursday, with the backing of 22 GOP senators. Those voting yes included John Boozman and Tom Cotton of Arkansas, Bill Cassidy and John Kennedy of Louisiana, Susan Collins of Maine, Chuck Grassley of Iowa, McConnell, Lisa Murkowski and Dan Sullivan of Alaska, Robert Portman of Ohio, Marco Rubio of Florida, John Thune of South Dakota and Todd Young of Indiana.

Senators voted 35-56 to reject an amendment from Utah Sen. Mike Lee that would have funded the government on a stopgap basis through March 10, pushing off decisions on the larger spending package until Republicans control the House.

Lee said ahead of the vote that moving the deadline would avoid Congress passing an omnibus package just before the holidays, giving lawmakers more flexibility on when they vote on the omnibus.

“The American people deserve nothing less than to allow us to make decisions consciously, knowingly, under the light of day with clarity of mind,” Lee said.

The Senate voted 45-47 to reject an amendment from Florida Sen. Rick Scott that would have eliminated the money Democrats approved earlier this year to bolster staffing at the Internal Revenue Service.

Oregon Democratic Sen. Ron Wyden spoke against the proposal, saying the funding boost is essential for the IRS “to go after wealthy tax cheats, who are refusing to pay taxes they already owe.”

The short-term spending bill is needed since Congress didn’t complete work on the 12 annual bills that fully fund the government by the start of the current fiscal year on Oct. 1.

Lawmakers used a stopgap spending bill, which keeps government spending flat, to give themselves until Dec. 16 to reach a bipartisan agreement on full year appropriations bills.

Key negotiators, including Senate Republicans, reached a framework agreement this week, clearing the way for lawmakers to draft the 12-bill omnibus spending package.

That task, which can take weeks, needs to be done in just days this time around. Otherwise, Congress will have to pass a third stopgap spending measure or face a partial government shutdown just before the holidays.

Speaker Nancy Pelosi, a California Democrat, said Thursday she is “optimistic” that Congress will be able to pass the spending package next week, before the new Dec. 23 deadline. But she also noted, “there’s a better way to” handle the annual spending process.

“We would have liked to have done it much sooner,” Pelosi said, noting the U.S. Senate hadn’t debated any of its appropriations bills in committee or on the floor.

“But the fact is we’re on a good path to get something done,” she said. “It’s not the bill any one of us would have written, but it’s the bill we can agree to. And we will have it done in a timely fashion.”

During House floor debate on the one-week funding bill Wednesday, Appropriations Chair Rosa DeLauro pushed back against House Republican opposition to the stopgap spending bill and efforts to wrap up the dozen funding bills this Congress.

The Connecticut Democrat said that House Republicans “were invited to the table many, many times to join the negotiations; they decided not to do that.”

“There was an offer made to my Republican colleagues on where we should go with an omnibus in June; another was in October,” DeLauro said. “We were told at the time that they couldn’t move to do anything until after the elections. We were then told that they had to then wait for their leadership elections to occur before they could actually engage. Then we were told we had to wait until after a Georgia election in order to engage.”

To Combat Gun Violence, This Artist Turns Ammunition Into Art